But with this hindsight we can also notice other things going on: the talk of Marion having to turn her mother’s picture around when her boyfriend is there, her co-worker (played by Hitchcock’s daughter) talking about her mother calling to check up on her… everyone has a mother lingering in their life from afar, overseeing things. But not quite like Norman does. 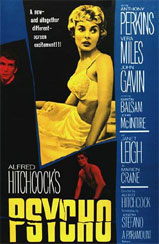 We’ve seen clips and photos and references and parodies of the shower scene almost as many times as we’ve seen Mickey Mouse, so it’s hard to get scared by it anymore. But when you see it in context it’s so much more. Most of its scare power has been squeezed out by familiarity, but it’s easy to forget that there’s more going on here before the stabbing. Forget about what’s about to happen and watch the look on Marion’s face as she cleans herself. She has decided to give the money back and she’s cleansing her soul. She feels good about it. And it’s actually her conversation with Norman that brought her to that decision. If he could just control these freaky urges he would’ve had a positive influence on her life, the dumb bastard.

On the latest fancy DVD of PSYCHO they included audio of Truffaut interviewing Hitchcock about PSYCHO. One thing Hitchcock says is that he’s very proud of the movie not for its content or acting but for it technical artistry, that for that it’s perfect. And he’s right, but what he’s missing is that without Anthony Perkins in that role it might not be the classic it is. He’s so perfect and so unlike other performances of the era. There’s nothing cliche about the way he plays crazy. He’s handsome, but skinny and a little weird. He’s awkward and sad, but also funny and likable. He’s even a little effiminate at times, which makes me wonder if that’s why Hitchcock wanted him for the role. If the stories are true then Perkins was hiding something himself. I suspect Hitchcock thought that would help. Or maybe he really didn’t give a shit about actors, like he claimed, and it was just a lucky coincidence.

At any rate, there’s something about that character that made him an American icon. I mean, as many great characters as Jimmy Stewart played for Hitchcock you never saw him coming back years later to show you the further adventures of that character, and I don’t think there was any demand for it. Although I guess I would’ve watched ROPE 2 and 3 where he solved other murder mysteries during what seems to be one continuous take.

My favorite acting in the movie is the way Norman nervously chews while being interrogated. He’s shot in profile and a little spot on his cheek keeps pulsating. It’s an obvious tell, but the funny thing is he doesn’t even know what he’s lying about. He thinks he’s covering up for something his mother did. He knows that’s bad but he has no idea how freaky the thing is that he’s actually hiding.

The book Psycho and the movie THE TEXAS CHAIN SAW MASSACRE were both loosely inspired by the real life killer Ed Gein, who dug up his mother’s body, killed some neighbors and ate parts of human bodies. CHAIN SAW rubs your nose in the gruesome horror show of it all, and takes advantage of how hard it is to understand what the fuck would make a human mind come up with that. I mean, nipple belts? I never. PSYCHO takes the other half of the coin, the side that kept it all hidden. Gein was not that much of a recluse, he knew people in town and they thought he was just a slow guy with a weird sense of humor. They had no idea.

Norman Bates is much more appealing. He seems like a nice guy, you feel sorry for him, even watching it knowing what he’s up to. He’s the killer but the movie lets us see him as a victim too, because he can’t control this other personality that he thinks is his mother. If he could control it he would. There wouldn’t be a problem here, and I’m sure he would do a good job of managing the motel. The Bates Motel would get pretty decent user reviews online, I think. “The manager even invited me up to his house for milk and sandwiches. Just a real friendly, family-run place, and quiet because it’s away from the freeway. I’d stay there again if ever visiting the greater Fairvale area.”

I’m telling you guys, watch PSYCHO. It has a real “mother” of an ending, but I won’t give it away. All I will say is that chick is no chick.

Anthony Perkins Ed Gein Hitchcock
This entry was posted on Friday, October 30th, 2009 at 12:49 am and is filed under Horror, Reviews. You can follow any responses to this entry through the RSS 2.0 feed. You can skip to the end and leave a response. Pinging is currently not allowed.