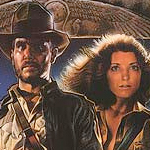 So they got the ideas and production of Lucas plus the supreme directing chops of Spielberg, and they made a great movie. I love that the opening shot is the Paramount logo dissolving into an actual mountain. It’s a signal that they’re taking extra special care from the first frame on to make every detail great. I know there are exceptions to this rule (DOOM), but usually when the filmatists even put thought into how to make the studio logo cool that means there’s gonna be some serious elbow grease in this movie. No laziness.

And that is the case here. It’s full of meticulously constructed chases and battles with nicely orchestrated chain reactions and escalation, punctuated by great stunts (dragging under and then behind a moving truck!) and punchlines (might wanna look out for that propeller, bud). There are numerous clever bits of visual storytelling (the dead monkey next to the bowl of dates to show that they’ve been poisoned; the Nazi who grabbed the hot medallion in the burning bar later seig heiling to reveal that the burnt flesh on his palm is how the Nazis were able to read its inscription). There are plenty of nods to old serial style (a line animating over a map to show the progress of his travels, a villain introduced with a sinister peek over a newspaper) but the speed and energy is all modern. 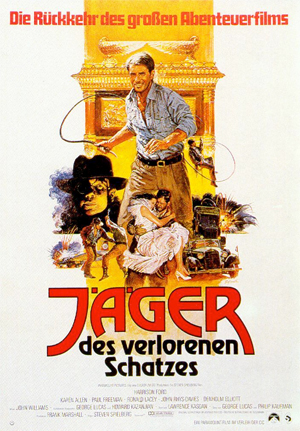 Dr. Henry “Indiana” Jones (Harrison Ford, AMERICAN GRAFFITI, MORE AMERICAN GRAFFITI) is an archaeology professor with a side gig of seeking out legendary artifacts in exotic locales. This doesn’t seem to include much digging, but instead lots of swinging on ropes, dodging booby traps, bullets, poison darts, tarantulas and snakes, and hanging off of moving vehicles (truck, plane, boat, submarine). These days you’d hire an American Ninja Warrior and have him use a phone to look up inscriptions, but back then Google was slower so you had to actually have a guy who knew about shit to do the adventuring. Therefore the government comes to Dr. Jones as an expert on some place in Egypt that the Nazis have been snooping around. Jones figures out they’re looking for the Biblical Ark of the Covenant (a golden palanquin type carrying case for the Ten Commandments tablets – another thing I’m surprised rappers haven’t started using yet) and they hire him to go get it first. If they get it they can have it for the museum, which seems to me like an invitation for Nazis to show up at your museum and cause trouble, but I don’t know. They’re professionals. They know their job better than I do.

Jones is not perfect. He almost blows it alot. He does not have stable relationships. He gets betrayed alot. But he is the man, so the filmatism treats him as such. We keep seeing his hands, his back, his hat before we see his face. We see one of his guides discover an ancient statue, scream and run away, but Dr. Jones proceeds. Only after a traitor pulls a gun on him and he knocks it away with his bullwhip is his face revealed. Later, when he’s reunited with the lover he abandoned, Marion (Karen Allen), she first sees him as a shadow on the wall, easily identifiable by his hat.

For her part, Marion is introduced by defeating a hefty man in a drinking contest. This establishes her feisty attitude as well as a talent she’ll try to utilize later to escape captivity. It’s weird though that she drinks like 32 shots of whisky then stands up, talks to Jones, is involved in a fight, and never seems tipsy. She doesn’t even do drunken kung fu. Nor is she hung over the next day. I guess she must’ve had alot of water and vitamin C that night.

Let’s talk about Marion’s no good sonofabitch pet monkey, who turns out to be a Nazi double agent. When he sieg heils, is he just mimicking his trainers, or is he truly saluting Hitler? Does he follow the ideology or is he just allowing himself to become a tool of evil? I don’t care, that little prick got what he deserved. Say what you will about that room full of snakes – Jones says he hates ’em – at least they are, as far as we know, just regular reptiles and not Nazi collaborators. Maybe that’s why they never bite our heroes. Maybe they’re trying to stay out of this war.

At least we know Dr. Jones is pure and fought the good fight against fascism. But there is one thing to look out for: the college girls adore him. Only one boy has even managed to get into his class, and the girls all swoon and flutter their eyelashes throughout his lecture. He doesn’t behave untoward as far as we see, but I’m just sayin. There could be some scandal dug up at some point. We can’t get too attached to our heroes these days.

When the Nazis do get the Ark the remains of the 10 Commandment tablets are in ‘as is’ condition – they are powder. Nobody thinks to try snorting them. I wonder what that would’ve done. If you’ve seen this movie you remember what happens when they try to do a ritual. The thing uses its “Lightning. Fire. Power of God or something” to melt those motherfuckers like candles. I wonder how long Hitler waited before he figured out they weren’t coming home?

The effects in that scene hold up, they look great, although if it was released today people would hate it because they’d assume it was done with computers. Oh, it’s practical? I love it then. I love practical. CGI though, don’t even get me started. Wait, are you tricking me? Is it CGI? Do I hate it? I don’t know anymore. Anyway, it’s the first non-STAR WARS movie to have effects by Lucas’s own effects company, Industrial Light and Magic. So that’s one way this is a major landmark in the evolution ’80s popular cinema. It’s the convergence of Lucas and Spielberg and the greatest minds in special effects pouring all their creativity into newfangled old fashioned thrill rides for the masses. The era of Lucasfilm and Amblin.

Of the movies Lucas has his name on but didn’t direct, this is one of the more hands-on, so it’s one that best represents what we think of as a George Lucas film. It’s an homage to the past using the tools of the present, it has a fast pace, fast vehicles, snappy dialogue, innovative special effects, a great score by John Williams, Harrison Ford. It even has a part where the villain straight up tells Indiana “I am a shadowy reflection of you.” This is not unlike something that would be said in a Seagal movie, but it’s also similar to the whole light and dark side of the force concept, that Luke could easily become like Vader, that Vader was once like Luke.

Anyway, check this one out, you will be surprised! Real sleeper here. He runs from a huge boulder in one part I think you will thank me you guys. RAIDERS OF THE LOST ARK it’s called.

adventure archaeology George Lucas Harrison Ford Karen Allen Lawrence Kasdan Lucas Minus Star Wars Philip Kaufman Steven Spielberg
This entry was posted on Thursday, December 10th, 2015 at 12:40 pm and is filed under Action, Reviews. You can follow any responses to this entry through the RSS 2.0 feed. You can skip to the end and leave a response. Pinging is currently not allowed.

106 Responses to “Raiders of the Lost Ark”