I think Steven Soderbergh has the right answer. Two Oscar nominations is nothing to commit suicide over. Sure it’s embarassing, but it’s not the end of the world. After all it was only one year earlier that his picture The Limey won Best Picture, Musical Comedy or Badass in the 1999 Outlaw Awards, and that magic could not be entirely faded. So Soderbergh packed up the political pretensions, left them out on the porch in a box marked for the retard center, and went and made a casino heist movie. 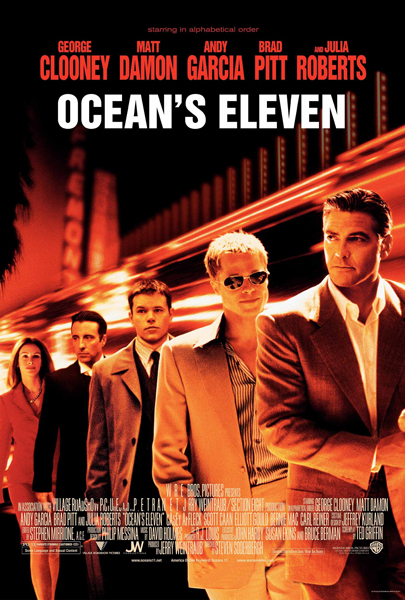 Storywise, Ocean’s 11 is pretty standard. Pretty much what you’d expect from an ensemble caper picture. You start out with A) the introduction of characters, also known as the Cavalcade of Robbery All-Stars. You know, you start out in one city where George Clooney gets out of prison, then you zip over to LA where 1999 Outlaw Award Winner Tyler Durden is busy teaching teen actors how to play cards. And zip zip zip as you whoosh around to the different cities to meet different colorful characters with their specialties (explosives, pickpocketing, circus, etc.) George Clooney is Daniel Ocean and then you need ten others to be the eleven, so you go and introduce those people.

At the conclusion of Section A you get Section B, the Brian De Palma’s Mission:Impossible maneuver, which is where you get a lot of diagrams and speeches about how impossible the security system is, how many lasers, how many high tech identification devices and what not, and you (the audience) get to enjoy waiting to find out how in fuck’s name they’re gonna get past all this. It’s all about anticipation and problem solving.

The rest of the movie pretty much flows from there. A+B=C, the actual robbery, with a side order of D (the conclusion). How will this unfold? Let’s watch and find out. This is a much bigger and less thoughtful crime picture than The Limey, closer to the tone of Out of Sight but with more emphasis on gimmicks and surprises and less on characters and relationships. But who cares about that shit anyway, huh? Well I guess in movies it’s good but this is a pretty good picture without all that.

What makes this one work is the execution. It’s like if you Write a poem – I mean who the fuck cares. I Write poems on the fucking john, it’s not a big deal. You don’t need to act all high and mighty just because you Wrote a couple of fucking sentences or phrases. (I’m talking to you, Maya Angelou). But then if you get the right person to recite the poem, like a Rudy Ray Moore for example, or a Petey Wheatstraw, then that’s what matters. That’s what makes the poem fly. You can ask T.S. Eliot, you can ask Ogden Nash, you can ask Edgar A. Poe, you can ask anyone. Most poetry is garbage unless it is read out loud real good. In our opinions. I mean, any of these guys would agree. You just make up a bunch of shit that rhymes, who cares.

This is the same thing. If Ridley Scott or somebody directed this script, it woulda been garbage. Just some boring casino heist crap. But this was directed by a 1999 Outlaw Award Winner. So we’re dealing with quality here.

First of all you got top notch Cinematism from top to bottom. The photographical techniquery is brilliant. Somehow these individuals made Las Vegas casinos look beautiful. George Clooney and Brad Pitt are not Badasses, but they are slick tie-wearing cons in the tradition of your Fred Macmurray or your Carey Grant. They look great walking around in front of blurry blobs of color created by cameramatic trickery. The music is danceable, the editing is smooth, the performances are charismatic. Brad Pitt even seems like he knows what he’s talking about. There is a small but memorable role by Bernie Mac who we know from The Original Kings of Comedy, Friday, The Player’s Club, Get On the Bus, etc. etc. but the rest of the world knows from his tv show, I don’t know what it’s called. Let’s call it The Bernie Mac show.

And then it’s in the little touches. Like the scene where the kid from Traffic (playing himself) comes out of a club with George Clooney and Brad Pitt (playing some other dudes). Everybody outside the club screams and mobs the kid, as Clooney and Pitt, two of the most popular hunky dudes in all of hollywood, walk through undisturbed.

Or like the ending. Skip to the next paragraph if you haven’t seen it yet. The idea that Julia Roberts would really want to get with him at the end is hard to buy, very hollywood and corny. And then Mr. Soderbergh throws in the shot of the henchmen following them. Somehow it still feels like a sugary sweet ending, even though you fucking know they’re all gonna die horrible painful deaths, if not now than somewhere not too far down the line.

I liked this picture alot. Not a masterpiece of Badass Cinema like The Limey, but a good entertainment picture. I found myself wanting more. I’m ready for Ocean’s Dirty Dozen.

Brad Pitt George Clooney Matt Damon Steve Soderbergh
This entry was posted on Friday, December 7th, 2001 at 1:11 am and is filed under Comedy/Laffs, Crime, Reviews, Thriller. You can follow any responses to this entry through the RSS 2.0 feed. You can skip to the end and leave a response. Pinging is currently not allowed.