Tommy plays Pete, a Texas ranch hand with unspecified past, and his best friend Melquiades is played by a guy named Julio Cesar Cedillo. He’s not in the movie as much as Pete though, because he’s dead. The movie opens with some good ol’ boys driving around with guns and they see a coyote chewing on something, and they shoot it. Then when they go to gather up the sweet, sweet coyote meat they notice that what the coyote was chewing on was The One Dead Body of Melquiades Estrada. 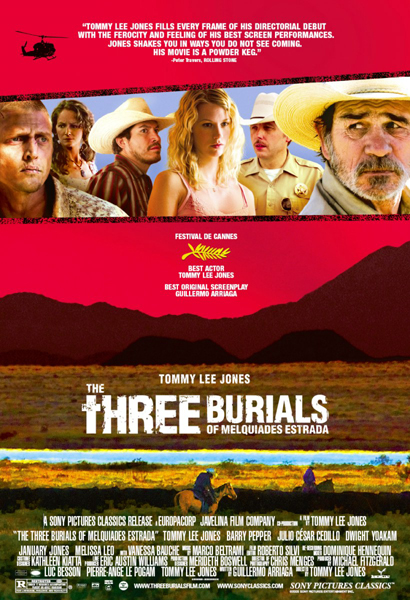 Poor Melquiades – dead and the cops don’t seem to give a shit. We don’t know it at first but it’s pretty easy to figure out that the culprit was this asshole border guard named Mike Norton (Barry Pepper from THE 25TH HOUR). He’s a scary Timothy Mcveigh looking motherfucker who obviously doesn’t get much joy out of life but does like to throw in a little of the unneccessary roughness when chasing illegal immigrants. This guy is a real asshole and you expect him to be over the top evil. But the shooting is an accident, a misunderstanding.

Doesn’t matter though. Pete is pretty pissed off about his best friend being dead, and even moreso when the sherriff, Dwight Yoakam, doesn’t notify him and just has Estrada quickie-buried with a little cross that says “Melquiades, Mexico” on it in sharpie. See, Melquiades once made Pete promise to have him buried in his home town. So Pete finds out Mike is responsible, kidnaps him at gunpoint, forces him to dig up Melquiades and then they head on horseback to Mexico to find the home town and bury him. And that’s what most of the movie is about.

So no, it’s not a remake of THREE WEDDINGS AND A FUNERAL. Similar, maybe. I haven’t seen that one.

Although the story is pretty basic there’s alot of subtle little things that break from your usual hollywood expectations. For example, Mike doesn’t even bother to plead his innocence until long after he’s been kidnapped, and even then it’s kind of a half-assed “for what it’s worth” kind of thing. I think maybe part of him agrees that he deserves this punishment. As much of an asshole as he is, he feels bad about killing the guy. (That said, when it happened he just said, “Hey man, you all right?” He didn’t run up and check his pulse.) Another thing is, you expect Dwight Yoakam to be the heavy for the whole thing, that he’s gonna chase them to the end, maybe begrudgingly gain a respect for his foe and turn the other way as he escapes or something like that. Instead of that you just hear second hand that he didn’t want to deal with this shit and went to Sea World. (I’m not shitting you, that really happens in the movie.)

Also there’s some clever moments, like a great scene where Mike and his wife are home not really talking to each other and a soap opera on the tv communicates through bad dialogue what they probaly oughta be saying. And a blind man who listens to Mexican radio even though he doesn’t understand Spanish, and some Mexican guys who watch American soap operas even though they don’t understand English. But mostly it’s real simple and subtle, organic, down to earth. Everybody compares it to Peckinpah. Stylistically it’s not much like Peckinpah, but the tone is similar – very grim and quiet with some dark humor. And the subject matter obviously has gotta remind you a little bit of BRING ME THE HEAD OF ALFREDO GARCIA. It gets pretty damn gruesome too with that body. It decomposes. It attracts ants. We’re not talking WEEKEND AT BERNIES here. We’re not even talking WEEKEND AT BERNIE’S 2.

Melissa Leo, who I didn’t recognize from HOMICIDE: LIFE ON THE STREET, is also in the cast, and a couple other people. In a way you could compare this movie to CRASH (not the perverted Cronenberg one but the newer, sillier one) because it uses some farfetched coincidences and has a redemption theme. But this is more my speed because it’s a pure, solid, brooding tough guy movie. There’s a couple tricks in the beginning, skipping around in time (it’s written by the guy who wrote AMORES PERROS and 21 GRAMS). But it boils down to the simple story of crazy as fuck Tommy Lee Jones dragging pissed off, beaten to a pulp scumbag Barry Pepper to Mexico to bury a body.

I don’t know if this is one of those “I’m gonna direct a movie just this once” type dream projects or if Tommy Lee Jones is seriously becoming a director now. But I hope it’s the second one. This is good old fashioned nuts and bolts meat and potatos type of filmatism, none of this fancyboy showoff shit. We need at least a couple of these type of guys to still be alive if we’re not gonna damage our brains forever. Tommy Lee’s a good man, he doesn’t need to pimp himself out in shitty hollywood movies when he could be making movies like this. I bet you ten bucks Tommy Lee got more satisfaction and pride out of this one then he did MAN OF THE HOUSE.

Thank you Tommy Lee for the first true badass Cinema of 2006.

Barry Pepper Dwight Yoakam January Jones Levon Helm Melissa Leo Tommy Lee Jones
This entry was posted on Saturday, February 25th, 2006 at 7:08 am and is filed under Crime, Drama, Reviews. You can follow any responses to this entry through the RSS 2.0 feed. You can skip to the end and leave a response. Pinging is currently not allowed.

One Response to “The Three Burials of Melquiades Estrada”