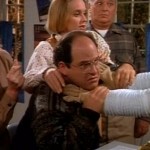 Now that this guy has a best director Oscar (for TRAFFIC), a Criterion Edition (for SCHIZOPOLIS), an outlaw award winner (THE LIMEY) and the all important misunderstood sequel (OCEAN’S 12), he decided there was one thing he was missing: a series of six digitally shot improvisational movies starring non-actors in their real home towns to be released in theaters, on dvd and on cable all at the same time. BUBBLE is the first in this ridiculous experiment and let’s be honest here. Even if you don’t know exactly what you’re getting into, you do know what you’re getting into. First motherfucker that watches BUBBLE and complains that it’s not INDIANA JONES gets a knuckle sandwich. This is not designed to entertain the whole world. It’s designed to be the type of movie you shoot quickly with a low budget on hi-def video and release on DVD at the same time as theaters. 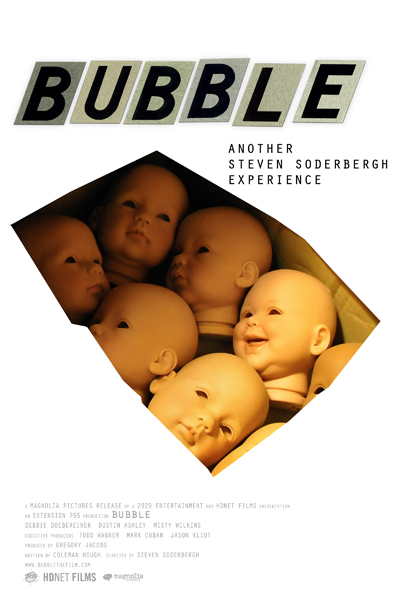 In my opinion, this is a real good and unique movie. Of course I’m the guy who liked FULL FRONTAL so your mileage may vary, some restrictions may apply, professional driver do not attempt. In a way I think this one’s more accessible than FULL FRONTAL because it’s less pretentious and convoluted, more straightforward. On the other hand it is less accessible because instead of starring Julia Roberts and the dude from FRASIER, it stars the manager from an Ohio KFC who the casting director spotted while sitting in the drive-thru.

The story is about as minimalistic as you can find. It’s about three employees of a doll factory in Belpre, Ohio. First you got Martha, a large middle aged woman, and you got Kyle, a shy kid in his early twenties she’s attached herself to. She drives him to work, brings him to get donuts, takes his picture saying he’s her best friend. It seems cool that this young guy would be friends with Martha but also kind of uncomfortable because you get a sense she has a thing for him or at least is possessive of him.

This becomes especially obvious when they meet the new employee Rose, a cute lady closer to Kyle’s age. Martha watches Kyle look at Rose and you know something’s up. They all eat lunch together but then the youngsters go in another room to smoke, and Martha obviously feels left out.

Later in the movie somebody gets killed and you don’t get to see who did it, although you got a pretty good hunch, and a police detective enters the story trying to get to the bottom of it. It’s kind of a mystery but not really.

What’s great about this movie is its almost complete lack of Hollywood bullshit. Obviously the story is made up, this is a nice lady who’s actually married and used her BUBBLE money to retire from KFC. But in so many other ways it’s real.

I want to mention real quick, this choose your own format approach actually made it harder for me to see the movie. See, I prefer to see movies in a theater. Even a small time one like this. I saw FULL FRONTAL in a theater and I got no regrets. I saw BULLY. I saw JASON X. We’ve been watching movies projected on screens for a hundred years now, and not because we were waiting for some millionaire asshole to invent a different way to do it. We were actually doing it for the more simple reason that WE LIKE WATCHING MOVIES THE WAY THE LORD TOLD US TO WATCH THEM, ON A BIG SCREEN IN A PUBLIC PLACE. I can’t remember one single time in all those years when anybody ever thought, “Shit, could some dickhead who owns basketball teams PLEASE hurry up and invent a way for us NOT to have to have this experience anymore, so we can start watching movies on our phones or watches while we do laundry and download MP3s and jerk off and eat yogurt and check the stock quotes and take a shit and walk the dog?” Not once, Mark Cuban. I’m looking at you, Mark Cuban. You fuck.

If it was a normal release I wold’ve gone downtown and seen it at whichever theater was showing it. But since they put it on DVD the theater chains obviously know they’re not gonna make dime one off it, so only Landmark has it because Mark Cuban owns Landmark. The one Landmark showing it in Seattle requires an extra bus ride for me and since it’s projecting digitally instead of for real, I’m not sure it’s worth it. So the next option is DVD. Fine, I’ll give in, I’ll watch it on DVD. But then you gotta go in and discover that all the copies are checked out. And I don’t have cable HDNET nor do I know what it is nor had I ever heard that combination of letters before this asshole decided it was how to release BUBBLE. So I went for my last choice, somebody burned me a copy. That turned out to be great so Mark Cuban, even though you’re trying to cynically murder our nation’s proud heritage of moviegoing (you no good ratsoup eating lowlife scumbag fuck) good job on delivering a high quality illegal copy of this fine movie right to my home.

(And yes I know it was Soderbergh who suggested this form of release, but he was just blowing smoke up the guy’s ass to get some money to do a movie. If Mr. Moneybags had any integrity at all he would’ve said, “Here Steven, take the money, thanks for trying to charm me with that the-future-of-moviegoing-will-fit-in-a-thimble bullshit, but we’re gonna go ahead and do it in theaters projected from film, and by the way would you consider doing another movie along the lines of THE LIMEY please, possibly starring The Rock if you’re into it. Here’s the budget for that one in this envelope, have a nice day Steve.”)

Anyway, I’m glad I saw it on illegal DVD because as soon as you watch it you have alot of questions about how exactly it was done, and the illegal DVD has some featurettes and commentary tracks that are enlightening. You find out that the actors were given topics to discuss but no dialogue. Stories from their lives were added into the discussion points so that they could talk about themselves. With the exception of two scenes that needed special lighting effects, they just used the lights in the rooms so everything would look natural. And it’s still beautifully shot – those cameras have sure come a long way. (Debbie, the woman who plays Martha, talks about how excited she was when she read on the internet that it’s the same cameras they used for STAR WARS).

All these things are important because they make for a movie that feels so much more like real life than you’re used to seeing. Martha especially is a character you never see in movies. And if you did it would usually be an actor doing a stunt, trying to Keep It Real. But this isn’t a stunt, it’s just a person. There are some other characters that as soon as you see them you know they’re really who they’re portraying. There’s a scene where Rose has to explain to her daughter that she’s going out and Martha will be babysitting her. Everyone who watches the movie will know instantly that it’s her real daughter because of the way she cries and clings to her mommy. You can’t do that with child actors. You probaly can’t even do that with Andy Serkis or Tom Hanks in motion capture. You gotta get the real thing.

The most interesting example of this kind of thing is the police detective. You don’t have to check the documentaries to know he’s a real cop. He’s not a tough guy either, he actually seems nice, even when he’s interrogating Martha and trying to get her to confess to murder. I mean it’s the old “I’m your buddy, you can tell me” approach, but you know it’s exactly how he really does this kind of thing. When you see how he acts you’ll wonder where all the fake tv and movie cops are getting this shit from.

The only thing in the movie that doesn’t ring true to me is the reactions of some of the characters when they hear about the murder. They avoid overacting, good job, but I had a hard time buying that these people would really give so little reaction to this type of news. There’s one amazing reaction though when the detective tells an elderly man his daughter has been arrested on suspicion of murder. Even after the DVD explained who the guy was and the circumstances surrounding his performance, I still have no idea how it turned out to seem so authentic. It seems like documentary footage.

The DVD includes an alternate ending that really changed my view of what exactly happened in the movie. I was kind of shocked. Soderbergh was smart to cut it out (see number one, above) because it’s very contrived compared to the rest of the movie. It’s a PSYCHO type ending where a doctor explains a particular medical disorder that could’ve been connected to the murder. And after you watch it as a deleted scene you have to question whether the scene being deleted means that’s not what happened, or whether it still could’ve happened but it’s just not spelled out. Hmmm.

Some people might think the movie is exploitative, because Mr. Bald Hollywood With Glasses has come in to document the plight of the poor manual laborers of Ohio and turned them into murderers. But I think if you listen to the commentary with the actors it’s clear that’s not the case. They’re not stupid, they knew what was gonna happen and they had fun. Debbie doesn’t seem offended that she had to play some uncomfortable scenes, and she doesn’t seem embarrassed to talk to hotshot filmatists about her 24 years at Kentucky Fried Chicken (she says she loved it there). I’m sure everybody in Belpre knows about the movie, but other than that let’s face it, a movie like this doesn’t count as being held up to national scrutiny. I doubt anybody from SCHIZOPOLIS ever gets stopped on the streets.

If you ever saw that funny trailer for this (montage of dolls being made in a doll factory, cut to giant letters that say “ANOTHER STEVEN SODERBERGH EXPERIENCE”) and you thought it was stupid, don’t watch this movie. If you’re into that type of shit though, I highly recommend the illegally burned DVD. Top notch. I can’t wait until my friend burns parts 2-6.

Steve Soderbergh
This entry was posted on Tuesday, February 14th, 2006 at 12:20 am and is filed under Crime, Drama, Mystery, Reviews. You can follow any responses to this entry through the RSS 2.0 feed. You can skip to the end and leave a response. Pinging is currently not allowed.