(honorable mention: Michael Stuhlbarg as “other surgeon at hospital who Dr. Strange doesn’t like.” But at least it’s hard to picture super hero.)

(Actually, come to think of it, they gave Chris Pratt muscles, they could give ’em to Michael Stuhlbarg.)

Doctor Strange is not even much of a fighting character, but the badass star of UNDISPUTED 2-4, NINJA 1-2 and UNIVERSAL SOLDIER: DAY OF RECKONING is (SPOILER) the one guy he kills in the movie! I guess it’s kind of in the tradition of Bruce Lee being defeated by James Garner in MARLOWE.

Like Bruce in that movie, Adkins does at least elevate what could be a complete nothing character in someone else’s hands. It’s a better role than he had in CRIMINAL. And probly THE BROTHERS GRIMSBY. And it’s way better than what the THE RAID guys got in THE FORCE AWAKENS. But it’s another sad sign that the people with the big money may never understand the great talent that exists in the action realm. 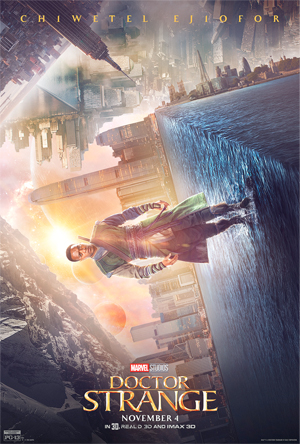 Anyway, DOCTOR STRANGE is the latest Marvel movie, the first one besides THOR and THOR: THE DARK WORLD to use magic and the first besides IRON MAN, IRON MAN 2, IRON MAN THREE, THE AVENGERS, THE AVENGERS: AGE OF ULTRON and CAPTAIN AMERICA CIVIL WAR to have a hero who is a rich sports-car-driving goatee-sporting arrogant smartass supergenius who’s bad in relationships and gets horribly injured and has to find his true purpose and seek redemption. But like pretty much all of the Marvel movies it’s a good crowd-pleasing blockbuster movie.

Strange is a brilliant neurosurgeon, but not brilliant enough not to be looking on his fucking phone while driving on a winding mountain road. So he crashes and completely fucks up his hands. It’s after years of exhausting every unorthodox medical procedure he can think of that he ends up in Tibet tracking The Ancient One for a possible spiritual cure to his shaky hands. Of course he’s very skeptical, but The Ancient One and her disciples, including Mordo (Chiwetel Eijiofor, REDBELT) and Wong (Benedict Wong, REDEMPTION), show him incredible magical sights, then reject him, and he has to convince them to train him.

Obviously there’s a Shaolin Temple type of vibe to this, which I like, and the magical techniques are cool and original enough to make it stand out from other stories of this type. They move their hands like martial arts moves, but draw magical glowing mandalas in the air to use as shields. When they wizard-battle Kaecilius in the middle of the city they sort of fold the reality around them (the INCEPTION type thing you see in the trailer) so that they are running sideways and upside down across shifting skyscrapers. They do things like project their souls out of their bodies and enter weird dimensions that look like a cool black light poster. There is some straight up psychedelic shit, tiny hands sprouting out of his fingers and tiny hands sprouting out of their fingers. I don’t normally watch the Marvel movies in 3D but I took people’s recommendations to do it for this one and it was definitely the right decision. Being more immersed in these crazy visuals has a disorienting quality that feels extra-hallucinatory.

As is the Marvel way, there are some laughs peppered throughout, and the day-after-Thanksgiving crowd loved that. But to me some of the comedics felt a little more self conscious than in the other ones. Or maybe they’ve just worn out these joke formulas. I remember thinking in AGE OF ULTRON that Joss Whedon has now done the joke where they start to do something super heroic but then they deflate it by screwing up or saying something awkward way more than he’s done real ones. So at this point it’s not deconstruction anymore, because there’s nothing to deconstruct when all the characters are like that. I felt that way here when Doctor Strange folds up the collar of his cape to get some wizard swagger but then instead of just letting him be cool it turns out to be a joke where the collars move on their own to make him look silly.

That type of joke is one way they’ve made the super heroes relatable, but I think they should have at least one of these characters who’s like Blade, he’s just actually for real straight up awesome. Blade doesn’t catch the sunglasses and spin around and then put them on upside down and make a self deprecating comment. He just does something awesome. You’re allowed to have characters like that, guys. Maybe Black Panther?

In full disclosure, co-writer C. Robert Cargill wrote at Ain’t It Cool at the same time I did, but I’ve never met him and I sort of violated protocol by publicly criticizing one of his reviews back in the day. So I was the Baron Mordo of Ain’t It Cool. Cargill rewrote a Jon Spaihts (PROMETHEUS) script with the director Scott Derrickson (HELLRAISER: INFERNO), his writing partner since SINISTER. This is by far the best movie I’ve seen by Derrickson, and while it’s tempting to give some of the credit to Marvel’s production team, that wouldn’t be fair. I’ve read some articles that make it clear some of the best ideas came from him, specifically that (SPOILER) instead of the climax causing a bunch of destruction it takes place while Doctor Strange has caused time to go backwards to undo a bunch of damage that had already been done to Hong Kong before they got there. And apparently he got the job by pitching the big Adkins scene, where astral projections of the two characters fight inside the hospital room while Strange’s body is undergoing life-or-death surgery. Definitely a cool scene that’s unlike anything in other comic book movies.

So, although mostly he does it while see-through, Adkins does get to do a few flying kicks. I think I’d say fight coordinator Jonathan Eusebio (NEVER BACK DOWN, STREET FIGHTER: THE LEGEND OF CHUN-LI, THE EXPENDABLES, JOHN WICK) manages to get in a little bit more martial arts than in most other special effects extravaganzas? I’m not sure.

But you’d be foolish to go to these mainly for the fighting. In this one, go mainly for the trippy magic shit. But that wouldn’t be enough if the basic character drama didn’t work. I think this one is more repetitive of IRON MAN than previous non-IRON-MAN standalones, but it’s compelling enough that I will be happy to see Dr. Strange and His Magic Pals again. Also, it has a solid gimmick for how he defeats the bad guy. That’s important in a comic book story, I imagine. Also it goes light on the connections to other Marvel movies, for those of you who prefer that. And I had heard that one of the characters later becomes a villain in the comics, but I think the way they set this up is impressive, because he has a more interesting motive than I expected.

I also gotta give them credit for the end credits. Not because of the standard Marvel “tag” scenes, but because Michael Giacchino’s a-little-too-close-to-Harry-Potter theme has a pretty cool stone-henged-out version with harpsichord, sitar, wailing guitar solos and then, right on cue, an organ solo. And the song is called “The Master of the Mystic End Credits”! I give the whole movie an extra wizard-point for that song, for a total of 12 wizard points.

In conclusion, I enjoyed this DOCTOR STRANGE more than the original version.

Benedict Cumberbatch Benedict Wong Benjamin Bratt C. Robert Cargill Chiwetel Ejiofor Mads Mikkelsen Marvel Comics Michael Stuhlbarg Rachel McAdams Scott Adkins Scott Derrickson Tilda Swinton wizard duels
This entry was posted on Tuesday, November 29th, 2016 at 11:10 am and is filed under Comic strips/Super heroes, Reviews. You can follow any responses to this entry through the RSS 2.0 feed. You can skip to the end and leave a response. Pinging is currently not allowed.