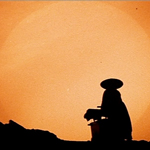 Master Kanbei chooses not to participate when these pricks run off to attack a passing mother and daughter, knocking out their male servant. But he doesn’t stop them either – not until he hears them brag about who they’re all working for. Then Kanbei intervenes in a very calm, business-like manner: he kills the servant, then the two victims, then makes the three mercenaries draw straws so that one can be killed and blamed for the murders.

One of the main things I love about samurai in movies: their extreme views of honor and professionalism. When Ogami witnesses this he’s impressed by Kanbei’s decision. They know of each other’s reputations from the old days and compliment each other. And then Kanbei insists on a duel, because even though he’s a lowly rent-a-samurai he operates like a real one, and is willing to die to protect the name of his client. 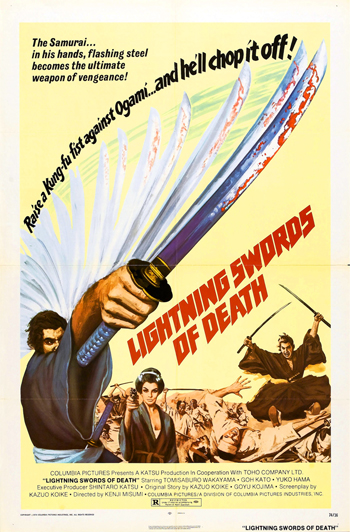 SHOGUN ASSASSIN would have you believe that the cool part of these movies is the people getting chopped up and spraying bright red blood. I mean, I’m not against those parts. But to me it’s these crazy ethics and negotiations they have. Like Ogami and Kanbei’s conversation when they’re standing in a field about to duel:

“If victory favors me, I will protect your child with my life.”

Can you imagine living that way? Well, I murdered a guy in front of his child. The only proper thing to do now is to raise his child.

I mean, it’s a very polite thing to offer. But Ogami rejects it:

“I ask you not to worry about that possibility. Because my son and I live on the Demon Way in Hell, we’re prepared to descend into Hell through the Six Realms and Four Lives.”

Well, Ogami respects this guy too much to kill him, and gets away with pre-emptively declaring the duel a draw. I guess if Kanbei really thought he could beat him that would be weaseling out. Since Kanbei is familiar with his skills he accepts it. So Lone Wolf and Cub move on.

Unfortunately, there’s rape happening all over the place. At an inn where the Ittos are staying some asshole tries to grab a girl Access-Hollywood-tape style and then jumps on her. She bites off his tongue, killing him, and hides in Ogami’s room. This is 25 minutes in and we get Daigoro’s first words of the movie: “There’s blood here,” as he hands her a cloth to clean herself with. Good kid.

And this leads to more samurai negotiation, as Ogami harbors her first from an officer, then from Torizo of the Koshio family (Yuko Hamada, GAMERA VS. GUIRON), a Yakuza madame who considers the girl her property. He actually wants her to leave, but when he sees she’s carrying a tablet with the name of a deceased loved one it reminds him of the death of his wife and he decides to protect her. He refuses the arguments of this gun-wielding yakuza and her troops without even bothering to get up until a gun is fired.

Even the brothel has a code: “we mustn’t cause trouble to ordinary people.” He bargains with them until it’s agreed that her debt will be paid off by him being water-tortured. (Shades of HANZO THE RAZOR there, a samurai who willingly gets tortured.) You know, not everything has to be about fighting. People can come up with solutions and compromises, like agreeing to be tortured on someone else’s behalf. And he takes it so well that his torturers are all super-impressed. Even Lady Torizo swooningly calls him “a true samurai.”

But you know how it is. It’s always something. Even though he’s freed the young woman from prostitution, he has to do more to get them to agree not to snitch on her for killing Matsu the Whiner. And Torizo figures out that this is the famous assassin Lone Wolf and Cub who her father, Tatewaki Miura, has been looking for. They’ve met before: Ogami cut off his arm as Executioner. But Miura wants him to kill Genba Sawatari, now the Totomi Province Governor (Isao Yamagata, SAMURAI REBELLION), who raped Torizo’s twin sister, causing her to commit suicide (similar to Paul Kersey’s daughter in DEATH WISH II). But he actually hates him for more political reasons, an incident that caused 400 vassals to lose their positions.

So this is the main story, but it keeps getting more complicated, because when he goes to see the Governor, the Governor doesn’t realize why he’s there and tries to hire him for a different assassination. And while he’s dealing with all this, some more ninjas come after him to attempt to avenge the deaths of the other ninjas that came after him. And he wins a duel by jumping really high and throwing his sword down directly into the top of his opponent’s head. This brings the series to new, nearly insurmountable heights of over-the-top mayhem when Ogami is ambushed by a BRAVEHEART style army of archers and gunmen, and single-handedly massacres them using hidden weapons in the baby cart (including machine guns and bombs, but mostly just a bladed staff). Near the end of the scene I paused it and counted around 90 corpses on the ground. None of them his.

Eventually his old true samurai mercenary friend Master Kanbei shows up, argues that neither of them are true samurai because of what they’re willing to do for money, and they really have that duel. I’m not gonna say who wins, except to mention that there are three more LONE WOLF AND CUB movies after this, and zero Master Kanbei movies. Also I will mention that it is genuinely a sign of respect when Ogami chops off Kanbei’s head. And there is a rolling-head P.O.V. shot.

Like the previous ones, this was directed by Kenji Misumi and written by Kazuo Koike, writer of the comic book that it’s based on. Like the comic they pepper it with quiet, peaceful imagery: the father and son fishing together, splashing each other, close ups of frogs and snails that catch Daigoro’s attention, Daigoro making a spit bubble, Ogami watching to make sure Daigoro doesn’t waste the bite of rice that he drops. Daigoro’s youthful innocence compliments his complete desensitization to violence. I love the way he just sits and looks at his dad facing off with enemies, or being spun and beaten with bats, and shows no emotion. Or how he sneaks up on a henchman doing target practice and claps for him. This does not seem like a kid that is ever gonna cry. So at least in that one sense Ogami has done a good job of raising him. Not so much in others, in my opinion. Not to be preachy. But you could argue that he has chosen a lifestyle that could sometimes be interpreted as being somewhat unhealthy for the boy, possibly, in a way, for some people. Not me.

This is the first one I’ve watched in the new Criterion blu-ray box set, and it looks better than I ever thought it could. I haven’t dug into the supplements yet, but the set is amazing just for placing SHOGUN ASSASSIN where it belongs: as a cool extra that comes with the real LONE WOLF AND CUB. If you don’t have these movies in your life yet, they are calling to you.

Go Kato Kazuo Koike Tomisaburo Wakayama
This entry was posted on Wednesday, November 30th, 2016 at 10:41 am and is filed under Action, Martial Arts, Reviews. You can follow any responses to this entry through the RSS 2.0 feed. You can skip to the end and leave a response. Pinging is currently not allowed.

13 Responses to “Lone Wolf and Cub: Baby Cart to Hades”