NEVER BACK DOWN is a much cheesier movie than FIGHTING. It’s almost exactly the slick, dumb, commercial vehicle you’d expect FIGHTING would be. It’s based partly in the tradition of kickboxing movies, partly high school movies, although there’s not a part about a nerd being taught how to be cool by dressing different or taking off their glasses. 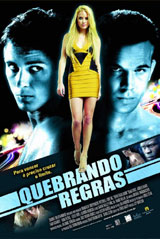 The hero, Jake Tyler (a buffed up Tom Cruise lookalike named Sean Faris), is your standard troubled-new-kid. His dad died drunk driving, he blames himself, gets in fights, his mom had to move, but he knows the answer nobody else knows in English class. The kids at his new school in Orlando know him from a Youtube video of a fight he got into during a football game. And they actually have a thriving co-ed community of competitive mixed martial artists, so they’re impressed by his skills.

Of course the biggest asshole at the school (Cam Gigandet) is their underground fighting champion and is treated like a rock star, walking around with a bunch of worshipful yes men and being able to do whatever he wants. And what he wants is a fight with the guy from the Youtube video so he lures him to a huge mansion/pool/beach party and baits him into a fight. It goes without saying that at first Jake tries to avoid the fight but is tricked into it and gets his ass kicked and must get his revenge and learn to never back down.

Next thing you know he’s defying his mom to get intensive fight training from Djimon Honsou, and defying Honsou by using the training to fight outside the gym. Doesn’t he know that you learn how to fight only to not ever use it? That’s how it’s supposed to work.

There’s another underground fight circuit called The Beat Down, where he hopes to compete against that asshole. They try to connect this movie to modern competitive fighting and the history of jiujitsu, saying that Honsou’s character trained with the Gracies. But it’s not based anywhere near the real world. In the actual UFC these guys train for months just for one fight that could last only a few minutes. In NEVER BACK DOWN’s “The Beat Down” they do an entire tournament in one night, each semi-finalist having maybe 5, 6, 7 fights pretty much back-to-back. And they have an emcee for the whole thing that might as well be Mekhi Pfeiffer hyping up the freestyle battles in 8 MILE.

Can you imagine somebody organizing fights like this and letting a bunch of high school kids get involved? One of those kids could so easily get mutilated, paralyzed or killed. Those dudes would be in prison, or a multi-million dollar lawsuit. So this is one of the more ridiculous fantasies of a teen subculture.

And that’s really what it is, a breakdancing or skateboarding movie but it’s MMA that gives them purpose and that they have to always record on their camcorders. He has the slang-talking nerd sidekick who latches onto him and introduces him to all the players (and gets hospitalized so our hero has no choice but to stubbornly walk into a trap). He has the girl (Amber Heard) torn between him and the bad guy. (And she looks like an actual teen while the two guys fighting for her look like adults, which is kind of creepy. I checked IMDB though and she’s only 4 years younger.) He has the mom who doesn’t understand and is disappointed that he’s part of this world. The kid brother who’s good at a more accepted sport who looks up to him and needs his support.

The asshole kid doesn’t just have lackeys, he also has a cruel father and disgustingly sculpted muscles. His parties include hot girls making out in bubble baths while dudes stand around in a circle watching. Like THE FAST AND THE FURIOUS the movie wants you to accept spoiled rich kids as streetwise because of their knowledge of an underground sport.

I guess the biggest sign that this is meant for teens and not action fans is the soundtrack. I looked up the bands and they include: My Chemical Romance, Soulja Boy, Chamillionaire, Rise Against, Kanye West. If you plop all those names into a movie you’re not doing it because you thought they fit the movie. There’s something else going on there. It would be pretty cool though if they got Kanye to do a cheesy ROCKY style montage song. But they didn’t.

The good news is it does have one of the classic action movie cliches: the special move he learns near the beginning and you forget about it and then he does it in slow motion as the final blow to win the climactic fight.

At the end everybody (even Honsou) learns a lesson about family. Jake sees the bad guy at school and they nod and smile at each other – a completely unearned bond. You guys know I like when that happens in a movie, but this bad guy character would never turn cool after getting his ass kicked. I don’t buy it for a second. No way.

Djimon Hounsou MMA
This entry was posted on Saturday, September 12th, 2009 at 12:59 am and is filed under Action, Martial Arts, Reviews. You can follow any responses to this entry through the RSS 2.0 feed. You can leave a response, or trackback from your own site.

15 Responses to “Never Back Down”