THOR (directed by Kenneth Branagh, no joke) follows IRON MAN 2 as the latest in the Marvel Comics “setting things up for a movie we’re gonna do later” series. This one introduces the Norse god Thor (hairy blond muscleman with a magic sledge) who will later team with Iron Man when the world faces a threat that requires both a robot suit and a magic hammer, and specifically a case where they have to be used by two separate people. If I understand correctly Iron Man would not be able to use the magic hammer because only Thor has the power to lift it, but I see no reason why Thor couldn’t wear the robot suit. He might not need it because he has armor and can fly. But I guess if he wants to use missiles.

Anyway, I’m getting ahead of myself. The movie begins in a desert in New Mexico, where Jane (Natalie Portman) and her assistant (Kat Dennings) and an old guy (Stellan Skarsgard) are driving recklessly in a van, using computers, etc. You know, one of those science-adventure teams like in TWISTER. They see a flash in the sky and they run over a bearded muscleman and ask “Where did he come from?” Then Anthony Hopkins tells us.

Hopkins plays the king of Asgard. He’s definitely not the same king from BEOWULF, because he has oversized armor and a metal eye patch. Asgard is a magical kingdom made mostly of castles and bridges. He has two sons, Thor and Loki, who are very different:

THOR is the son who is a brash warrior, loves to fight, loves adventure, etc.

And by the way it’s pronounce Azz-guard. Don’t you dare pronounce it Ass-guard, smart guy. That’s an important part of an Asgardian’s clothing, obviously, but it’s not the name of the kingdom. 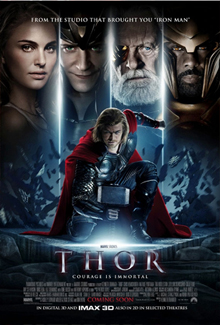 So you can see where this would lead. There is CGI monsters called “frost giants,” etc. Thor is not ready to become king (he started a war, he knocked over a big table) and instead gets banished to that shithole New Mexico, Earth where he loses his powers and is merely a mortal. Except also has super strength and can beat up like 50 armed soldiers and I think can control weather to interfere with electronics. But otherwise is mortal and powerless, so he hangs out with Natalie Portman. Her computers get confiscated by the government, so he helps her in lieu of a lawyer.

The script is ambitious in terms of scale, but weak at basic things like establishing characters. Because Thor has to learn a lesson and grow throughout the movie he’s introduced as an obnoxious asshole who wants to start a war out of machismo and yells at his dad all the time. He’s got four warrior pals (including Punisher #3 Ray Stevenson sporting a dwarf-from-Lord-of-the-Rings beard) that I assumed just worked for him and didn’t like him until Thor made reference to all their adventures together, quickly implying that he’s supposed to be charismatic and fun leader. Later it turns out that he is, but it would be nice to see in the beginning that he’s a likable dude even if immature. Instead it seems like he’s an arrogant dick who turns humble and polite as soon as he lands on Earth.

(It doesn’t help that the movie has what would’ve been considered a blatant Bush parallel a couple years ago. He’s the spoiled, party-loving son of the king who uses an attack by a small group of invaders as an excuse to start a dangerous war against his father’s wishes. If he’s Bush then how am I supposed to root for him later?)

Thor’s brother Loki pretends to have the kingdom’s interests in mind but is secretly plotting a major betrayal. He seems calculating and evil but we know he’s mischievous because one of the warriors says that he’s done “his share of mischief.”

The contrast between Asgard and Earth is a little weird. Asgard is an epic digital land with huge sets and armies, Earth is a ghost town. The Earth scenes are mostly confined two locations: the crater from after the credits on IRON MAN 2, and a little speck of a desert town where there aren’t many people and there are even less buildings. Then Thor’s superpals show up and walk down the dirt roads in their crazy armor, it’s just like SUPERMAN 2. And MASTERS OF THE UNIVERSE. I guess it’s nice that they had the freedom to choose a small town as a deliberate artistic choice and not because they’re making MASTERS OF THE UNIVERSE and have no money.

Luckily they mostly stay away from the “what is this strange mechanical beast you ride?” type fish-out-of-water humor. There’s one line that implies Thor might’ve been to Earth before. If not maybe he’s just smart enough to figure other “realms” have their own magical shit that they do, no big deal. But there’s definitely some BEASTMASTER II type corny jokes in there (“is there a renaissance fair in town?”) and even a drop of racism (a S.H.I.E.L.D. agent calls the Asian-Asgardian “Jackie Chan”).

For a high-tech, super-secret, super-powered intelligence organization S.H.I.E.L.D. sure has some huge holes in their security. They can seal off an area, confiscate property, reroute commercial flights from their laptops, but they can’t notice Natalie Portman hiding under a coat outside their fence, or Thor swiping an important book off of a table as they escort him out. Hopefully Scarlett Johanson or the Incredible Hulk or somebody will get them to work on those blindspots.

Also I could swear Thor is wearing Earthling pants and t-shirt when he lands. Maybe you get those inside the portal.

Of the supporting characters the standout is definitely Gold Armored Magic Guy Who Controls the Portal Thing, played by Idris Elba from that TV show you guys all watch and talk about all the time, The Office. He mostly just stands still and talks in a processed voice, but he makes a good eternal being and gets the biggest laugh in the movie. I really like Idris Elba. Hopefully his face is hidden enough that he can come back as another Marvel hero. Him and Punisher #3.

By the way, there was a story a while back that supposedly conservatives or purists were upset about a black actor playing a Norse god, and I still see people repeating that. To be fair to conservatives and comic book literalists, though, it should be pointed out that while the word “conservative” is in the name of the group that started that nonsense they’re actually a white supremacist group whose websight describes them as “the only serious nationwide activist group that sticks up for white rights!” Yeah, they’re purists all right, but they don’t read comic books. Not enough pictures. So we can stop mentioning that as an actual controversy, unless we’re gonna get quotes from the Flat Earth Society in articles about upcoming space movies.

Speaking of racists, Natalie Portman is not one as far as I know, but also is not that great in this movie. That was not a very good segue in my opinion but there’s very little I can do about that other than write something better, like they could’ve done with her part in this movie.

You better believe I can dig Portman as an actress. I thought she earned the shit out of that BLACK SWAN Oscar and I’d think that even if the entire role was done with her head superimposed onto the angry dance double. And seeing her in YOUR HIGHNESS definitely got me past any lingering “she was the little girl in LEON” barriers to perviness. But I have to say that this is not one of her top roles. She’s a smart and charming young lady but they did not quite give her the tools to make us believe she’s a “master physicist” in instant love with a warrior god from another dimension. One part where she was really natural though was a funny voicemail she has to leave while outside of the S.H.I.E.L.D. security area. (Come to think of it even she thought they’d be able to spot her there.)

So it’s not exactly a captivating love story. I wonder if Thor’s lesson in humility was supposed to be learned from Jane? If so maybe it was just because she told him not to smash mugs, like he does in a diner to celebrate enjoying coffee. A little later he not only serves breakfast to Skarsgard but politely tells him he’s “very welcome.” So it’s a stunning transformation of character.

Chris Hemsworth, who plays Thor, is definitely the best thing about the movie. He was the guy who played Captain Kirk’s dad in the opening of STAR TREK: NOT THE MOTION PICTURE, JUST STAR TREK. Now he’s got He-Man muscles, but he can act. Despite the weaknesses in the script he’s very likable and will be a good addition to the real story they tell whenever they decide to make the actual movie and not a bunch of set ups and cameos.

Also I gotta give the movie props for at least being different from all the other comic book movies. The combination of super hero and swords-‘n-magic fantasy is novel enough that it doesn’t feel like a rehash of any of the other ones.

I enjoyed watching this movie the one time, wasn’t bored and didn’t think it sucked at all. But it’s definitely a mid-level comic book movie. Somebody asked me if it was closer to IRON MAN or IRON MAN 2. I gotta say it’s below both, but way above, say, any of the FANTASTIC FOUR movies, or GHOST RIDER. And I don’t think there’s any dancing in there, so you “Never forget SPIDER-MAN 3” guys can sleep peacefully.

I guess I’d put it at about Hulk movie #2 level of quality, but a little better because I don’t have to compare it to an earlier more interesting Thor movie. 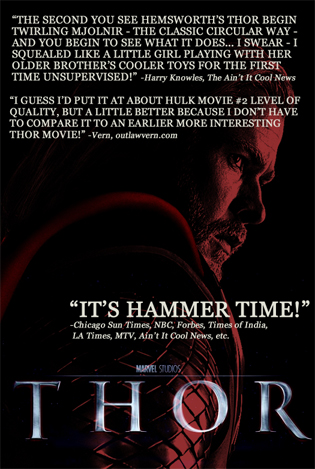 Anthony Hopkins Chris Hemsworth Kat Dennings Kenneth Branagh Marvel Comics Natalie Portman Skellan Skarsgard
This entry was posted on Saturday, May 7th, 2011 at 9:48 pm and is filed under Comic strips/Super heroes, Fantasy/Swords, Reviews. You can follow any responses to this entry through the RSS 2.0 feed. You can skip to the end and leave a response. Pinging is currently not allowed.