On one hand I don’t want to just dismiss this movie outright, because it’s at least unique and it has a bunch of weird shit that might tap into somebody’s nightmares and really creep them out. On the other hand it’s about Willem Dafoe talking gently to Charlotte Gainsbourg and asking her how she feels about things and then every once in a while he sees a deer in the woods and gets scared and then toward the end she bashes his balls with a block of wood and jerks him off until he bleeds and attaches a mill-stone to his leg and then he scurries around naked in the woods and hides in a little burrow like a wounded badger and tries to beat a crow to death but it gets away.

In my opinion I don’t know WIFN director Lars Von Trier was going for with this fuckin thing, or if there even was something specific that he was going for, or if he even is aware that there are people that watch these things and try to get something out of them. I don’t know if there’s a way to ask him that without it being awkward, but if it ever comes up please see what you can find out. 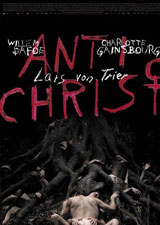 Divided into chapters (with splattery painterly title cards) it starts with an overblown slow-motion prologue set to opera music (IMDB says “‘Lascia ch’io pianga’ from ‘Rinaldo'”) and shot in vivid, high contrast black and white somewhere between the look of SIN CITY and a Calvin Klein Obsession commercial. Dafoe and Gainsbourg (credited as “he” and “she” – oh, for Christ’s sake) are fucking while their toddler climbs out of his crib and falls out the window. Just in case you’re not clear on what exactly is going on here there’s a THRILLER: A CRUEL PICTURE style insert shot of a penis inserting into a vagina. They climax just as the kid hits the ground and as their laundry finishes.

If you think about it this is the same thing that got the camp counselors into so much trouble in FRIDAY THE 13TH. They were too busy getting it on to watch Jason and that’s why he drowned. At least He and She managed to get their laundry done, they were more productive than the counselors. Still, the result is similar: the mother goes crazy, but unlike Pamela Voorhees this gal doesn’t kill teenagers, and does cut off her own clitoris. I think it’s implied that she was already evil before the baby died, or the baby was evil, or maybe the house is haunted, or nature is evil and real fucked up or what not. It is very possibly related in some way to one of those things, is the vague idea I sort of got out of this one. But I am not very confident in any of those theories to be honest. I am confident there was vaginal penetration, at the very least that was communicated clearly.

The rest of the movie is about their grief and the resentment tragedy brings into their marriage. They go to their vacation home out in some woods, and it’s called Eden. Don’t you see? It’s like the Bible! Isn’t that crazy? You can’t make shit like that up.

Oh, I’m sorry. Reverse that. You can only make shit like that up.

Dafoe is a therapist and decides to treat her as his patient. So alot of the movie is him gently asking her how she feels about different things and to picture herself laying in a field turning green and shit like that. Then most of the rest of it is her complaining about him doing that, and freaking out. Dafoe starts having encounters with various animals, maybe it’s a dream, maybe it’s not, isn’t it so deep that you don’t really know, that just blows your fuckin mind I bet. Also there is talk of chestnuts. Gainsbourg starts remembering things about some book she tried to write a while back, which she describes as a scholarly thesis but appears to actually be some kind of illustrated occult book that she could sell to dungeons and dragons nerds or heavy metal fans. Then she goes out into the woods naked and furiously masturbates (sorry, Serge). There is some implication that the kid either had cloven feet, or mom tried to give him some, or that Dafoe is overly parnoid about the shoes he’s wearing in a photo. Is he the antichrist? Who knows? Who cares? Not me. Not you. Not von Trier.

Hey wait a minute, it’s called ANTICHRIST and it stars the guy from LAST TEMPTATION OF CHRIST. If Dafoe had said no I wonder if he was gonna try to get Jim Caviezel?

Also I wonder what this guy’s deal is with the northwest. DANCER IN THE DARK took place in Washington state, but didn’t even resemble the United States very much. In this one you know from a Seattle address on an envelope that it takes place here. I guess it’s more believable that this would be in Seattle than Bjork and Catherine Deneuve working in a factory here. But still, von Trier. Come up with a new place unless you’re gonna come here and see what it’s actually like.

I’m sure von Trier is probly saying something real fuckin deep about women or the nature of evil or therapy or chestnuts. But for me he failed to get it across or to make it seem interesting enough for me to try to figure it out. I know he’s not new to the arthouse horror game either, but it still kind of felt to me like a guy who thinks he’s above genre thinking he’s making something way better and more meaningful than other horror movies, while actually making a horror movie that’s not scary at all and doesn’t mean a damn thing. I’d hold CANDYMAN up to this any day of the week. Plenty of straight horror movies have way more interesting things to say and still work better as horror because the characters are relatable enough to pull you into their reality. It might not be fair to assume von Trier doesn’t know about those movies, and it’s not like he’s lecturing the audience like fuckin Michael Haneke in FUNNY GAMES. But I just couldn’t shake that feeling that that was approximately the attitude this thing was coming from.

The one thing I’ll remember from this is the spoiler somebody told me about, involving the fox. I’m sure this got huge laughs in theaters where nobody saw it coming, but I saw it on DVD and kept waiting for it to happen. Basically, Dafoe is looking at a fox that’s wounded or dead or something, then suddenly the fox does this:

I mean, is von Trier trying to make us laugh there? It doesn’t seem like it. I remember the talking dog in SUMMER OF SAM got laughs, and that one made sense ’cause everybody knows David Berkowitz claimed he thought a dog gave him orders. But this shit? Come on. It would’ve been hard to pick a cornier phrase and voice. Maybe something about “the doorway to true evil.” Come to think of it this fox could show up at the end of Demon Dave’s CHAOS. That would be great.

I’m not sure if it was worth watching just for the fox, and it was actually funnier how I imagined it when somebody described it to me. He’d only read about it himself, so in his telling the fox had a Peter Lorre voice. And the way I pictured it the fox wasn’t in closeup, he was just pawing through the woods and then he turned to the camera and said it, breaking the fourth wall, a little witty aside, like Ferris Bueller would do.

Aside from the Chaos Reigns Mania sweeping the nation it seems like most of the discussion of ANTICHRIST is of the “people are shocked and outraged!” variety. There are two or three quick nasty parts in the movie, it’s true, but I didn’t find them all that shocking. Maybe I’m desensitized but I think it’s more that the movie just wasn’t working on me so none of it really hurts. You gotta empathize with the characters in order to really feel their pain, but I’d already been groaning and rolling my eyes at all the pretentious ludicrousness for 60-90 minutes by the time the shit went down. It’s kind of the Marilyn Manson factor, by the end of the movie it’s pretty clear Mr. von Trier is trying to be outrageous so unless you’re a real sucker you feel more like patting him on the head and saying “Oh Lars, you little rascal” than gasping in terror.

Charlotte Gainsbourg Lars von Trier Willem Dafoe
This entry was posted on Thursday, November 19th, 2009 at 1:53 pm and is filed under Horror, Reviews. You can follow any responses to this entry through the RSS 2.0 feed. You can leave a response, or trackback from your own site.