Okay, first I got a warning for some of you comic strip wise guys out there. If you like the comic strip this movie is based on, DON’T WATCH THE MOVIE. It’s just not worth it, man. You’re gonna be mad because, according to my sources, in the comic strip the dude is British, and even if he wasn’t British, he wouldn’t be Keanu Reeves. Hey man I’m a purist too sometimes, I understand this. I’d be pissed if they made DIE HARD into a comic strip, but they got John McClane wearing shoes or something. Or playing a guitar. It’s gonna be hard to get past what they did here so forget it man, save your time, save the stress. Go get a massage or something.

But since I don’t read that kind of business, it’s okay with me. I’m allowed to watch CONSTANTINE. For all I know Keanu Reeves actually IS John Constantine, who is (at least in this movie) some self loathing chainsmoking supernaturally gifted freelance exorcist type who finds out he has lung cancer and tries to figure out how the fuck he’s gonna get into Heaven when he tried to kill himself as a teenager. And he uses his connections with angels and knowledge of demons to try to straighten things out. 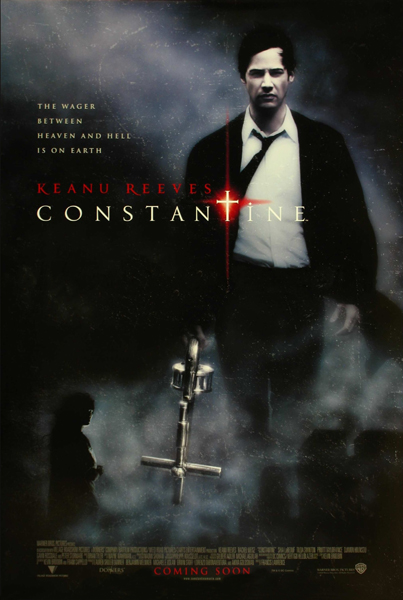 For me, the movie immediately drew me in as the studio logos rotted away like they were burning in Hell (where they probaly belong) leading into a short and perfectly executed teaser involving a biblical relic showing up in Mexico and causing some trouble. (You know how those magic spears and shit are.) Smoking is a big part of the movie, so we’re introduced to John Constantine’s cigarette before we are to him – hanging out of a car, dropping on the ground, looking cool like cigarettes like to do in movies. When Constantine strolls into an apartment building where there’s a veiny faced girl in serious need of an exorcism, he tries to leave his smoke on the edge of a table while he does the deed, so as not to waste it. (Much later, he’ll snub one out in a pool of his own blood.)

Keanu is real cool in this scene, wearing his film noir tie and wrinkled shirt, looking like he might have a hangover, getting real irritable at this demon for fucking up his afternoon. I think most of us will agree this is a good scene. The trouble comes afterwards, when Keanu starts, you know, talking.

Now honestly, I am gonna do it, I am gonna come down as pro-Keanu in general. I think he is probaly a good guy, he seems to really dedicate himself to his roles, all that kung fu and philosophy and everything, and he takes his time, he doesn’t shit em out like alot of big movie stars do. I mean he’s got an okay track record I guess. Shit, I even enjoyed the Matrix sequels. You hear that, motherfuckers? I liked the Matrixes. In fact, I am gonna go out on a limb and say I think Keanu Reeves is probaly an intelligent dude too, despite appearances. And he’s one HELL of a bass player, in my opinion. (just kidding, I have no idea) Anyway he does a real good job in this role. For Keanu.

But I gotta admit it man, the comic book fundamentalists are probaly right to say that this individual is not the right individual for this particular role. Because you can tell, the guy is supposed to be gritty. Keanu does not have alot of grit in him. Even after all that kung fu, I bet his hands are real soft and smooth. He does not use Boraxo. The dude is 40 years old, looks as pretty as the baby Jesus. In this role he looks real cool, you want to like him, but some of these tough guy lines you can’t really buy coming out of his mouth. He doesn’t always sound like he knows what he’s talking about. So for most people that’s what it’s gonna come down to, you are gonna have to play God while watching this movie. And you are gonna have to decide – God, can you forgive Keanu?

Personally I chose to be more of a merciful, New Testament era God. None of this pillar of salt bullshit. I just went with it, rolled with the punches, like the Lord does. And pretty quick I realized that I was enjoying this movie. Because you have an interesting set of characters like this coughing bastard Constantine, his fat, bald, nervous ally played by Pruitt Taylor Vince, and to a lesser extent his wacky sidekick (the kid from I, ROBOT, playing the same character, and possibly wearing the same hat). And you have this interesting world that combines multi-cultural Los Angeles with a little bit of film noir pulpiness and a whole bunch of angels and demons and magical items.

In addition to the “not wanting to go to Hell” business I mentioned earlier, Constantine gets caught up in some shit involving Rachel Weisz and her dead twin sister who she doesn’t believe committed suicide. For a while I really enjoyed the the thought and imagination put into this world, the little details and the rituals and the depiction of Hell, where you see what might be a traffic jam made out of human skin, I’m not sure. But eventually, maybe two-thirds of the way in you start to think maybe they should stop making up new magic rules. Next thing you know he’s fighting some American Psycho-looking arc-angel, running around with a giant crucifix-crossbow-machine-gun and in one scene he seems to mistakenly think that he is Blade. I’m sorry Keanu Reeves. You are Neo, and that means something. But you are not Blade. Nobody is Blade except for 1. Blade and 2. (arguably) Wesley Snipes. But definitely not you. Sorry bud.

Also, I might be wrong but it seemed to me there was a scene that involved a bath tub inside a bowling alley. How did they find a bath tub in a bowling alley? That was weird. I may have been confused though, because somewhere around this point of the movie I started to get a little lost and a little bored. I’m leaning towards blaming the movie for this, but I would also lay some percentage of the blame on a drunk sitting in the theater, who was performing a running commentary about the nature of reality, how much he hates know-it-alls, etc. Hey, I been there, man.

(I should mention that despite my award winning web sight, highly rated book and undeniable Writing power, I am not a member in good standing of the critical establishment. I do not get to go to critic’s screenings. This was one of those preview screenings they give out free passes for. They are mostly attended by weirdos, and crazy shit usually happens. This time they accidentally started the movie before the radio station interns had introduced it, so the fuckers tried to talk over the opening scene, while playing rock music, and throwing out t-shirts. If they hadn’t been shouted down I swear there would’ve been trivia.)

Anyway between the drunk’s twenty minute key note address and all the excitiment of theater employees spying on him with nightvision goggles, deciding not to do anything, I got a little sidetracked. Next thing you know I wasn’t sure what was going on in the movie, and started to lose interest.

Then, like magic, or something, Peter Stormaare showed up as the silliest devil I seen in a long time, and all the sudden me and CONSTANTINE were best buds again. Even my drunk friend quieted down for a few minutes to see what happened.

So Keanu doesn’t always work, and it gets a little droopy in the middle, but I give this movie points for style and confidence and imagination. Lots of good atmosphere due to strong sound design and cinematography. There are some good scenes where you think damn, I never seen a movie do it quite like that before. I mean it’s a pretty good one, I was surprised.

To be frankly honest I was not planning on seeing this movie at first, and what got me interested is almost embarassing. The director Francis Lawrence, like all other first time directors, is an MTV music video director. Now I don’t watch many videos but one I remember seeing was for Justin Timberlake, that curly haired white kid who they tried to turn into Michael Jackson. He’s just some pretty boy pop star but he had this creepy, fucked up video where he was stalking a Britney Spears lookalike. He sneaks into her house, dances around in her hallways, and keeps moving out of the way just in time to stay out of her line of vision. He watches her when she’s in the shower! Not like Revenge of the Nerds “ha ha ha” style but “oh jesus this guy’s a sicko” style. He videotapes himself making out with a woman on her bed, leaves the tape in her VCR. First time I saw it, I honestly thought he was gonna start sniffing her panties when she was out of the room. Maybe jerk off into her shoes or something, I mean who knows.

The best part was MTV shows this fucked up stalker video on their countdown show, then they say, “hooray, that was Justin Timberlake” and nobody ever says, “What the fuck was that? Was he just going through her garbage?” I mean don’t you think Britney Spears saw that video? I figure the guy who made this video, either he’s a little brilliant, or he’s a weirdo pervert freak. Either way, he directed CONSTANTINE, so I saw it.

I’m not gonna say he’s with Dave Fincher, Spike Jonze and Michel Gondry in the land of MTV directors turned filmatic geniuses, but I do think he’s closer to their category than that other, larger group. He’s definitely got some sense of creativity and artistic vision and hopefully he’ll go somewhere. We got our eyes on you, pervert. Don’t fuck it up.

Djimon Hounsou Francis Lawrence Keanu Reeves Peter Stormare Rachel Weisz Shia LaBeouf Tilda Swinton
This entry was posted on Wednesday, February 16th, 2005 at 8:18 am and is filed under Action, AICN, Comic strips/Super heroes, Horror, Reviews. You can follow any responses to this entry through the RSS 2.0 feed. You can skip to the end and leave a response. Pinging is currently not allowed.

3 Responses to “Vern snuggles with CONSTANTINE!”