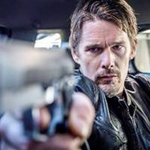 In classic international co-production fashion it begins with an Interpol agent, Lin (Xu Qing, FLASH POINT), under attack by militants in South Africa while transporting a whistleblower (Tyrone Keogh, BLAST, STARSHIP TROOPERS 3) to testify to the U.N. It’s meat and potatoes machine-guns-rocket-launchers-and-jeeps type action that immediately shows you the movie means business. Heads are popping, bodies are bouncing off windshields and rolling under tires.

Then we cut to a sunny beach in the Florida Keys where Travis Conrad (Hawke) and his father-in-law Frank (Hauer) are fishing and having a drunken philosophical conversation about it. Like, bleary-eyed, I-wonder-if-Hawke-actually-had-a-few drunk. Eventually they quit putting off what they’re here to do: walk out to the shore and spread the ashes of Travis’ wife and daughter son.

After dark, wasted Travis puts Frank to bed and heads to a strip club to buy coke, and I knew the movie was working because I was too interested in this sad night of self destruction (having yet another drink, but with his back turned to the stage, because “I have a wife and kid”) to worry if there’s ever gonna be action again. 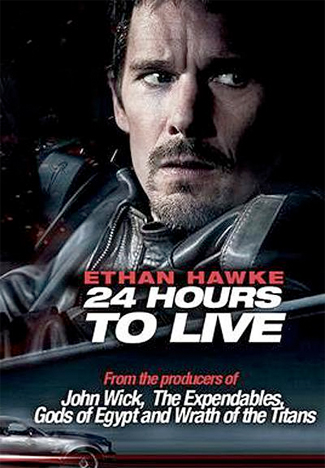 But it doesn’t take long. The first acknowledgment that Travis isn’t an ordinary dude is the clever way he wards off two guys who come looking for him (it involves trickery and cleaning supplies stolen from the janitor’s closet). And those guys aren’t even trying to harm him – they work for his old friend Jim (Paul Anderson, A LONELY PLACE TO DIE, THE REVENANT) and the Red Mountain private security firm, who are offering him ridiculous money to come off his hiatus and kill that whistleblower.

On one hand, it’s disappointing that he has to fly out of the country, because it’s enough time to sober up. I was curious to find out if he could really assassinate somebody while unable to touch his nose and walk a straight line. On the other hand, there’s a real effective discomfort as he goes about stalking Agent Lin at home and abroad, talking to her young son, picking her up at an airport bar. I was sympathizing with this guy and now he’s willing to do this shit and I don’t know how far he’s gonna go. It unfolds unpredictably with a few OH SHIT moments where I really didn’t see it coming or know where it meant things were heading.

But if you saw the trailer you know he’s gonna end up with a nasty digital readout crudely sewn into his wrist, glowing through the skin, counting down the 24 hours he has left to live. And this is when he decides fuck it, I’m gonna do the right thing for once in my life. I’m gonna try to save this whistleblower. He got corrupted, did evil for corporations, now he’s literally been brought back from the dead for one day and he’s using it for last minute redemption. He’s not drunk this time, but he might as well be because he’s on the run immediately after invasive experimental surgery, so he’s a total mess. Also he hallucinates, but I’m afraid it’s of the “visions of his dead son” variety, not the psychedelic kind.

For some time now I’ve really respected Hawke for his streak of lowbrow-ish movies that are better than expected and that he seems as invested in as if it was the one where he plays Chet Baker. DAYBREAKERS was when I first noticed it, but also THE PURGE is a good example because it’s a completely asinine premise but his likable presence made me give it more of a chance than I thought it deserved and then it turned out to have a pretty good classism subtext. PREDESTINATION is another one that shows he chooses interesting projects. And then he’s fun when he shows up in THE MAGNIFICENT SEVEN or VALERIAN AND THE CITY OF A THOUSAND PLANETS.

24 HOURS TO LIVE is more evidence that Hawke knows how to pick ’em. In a way it reminded me of that Kevin Costner movie I liked, CRIMINAL, because it’s using a science fictional medical procedure as a jumping off point for a character-driven story about people seeking absolution for the bad things they’ve done. But Costner played it as a gruff asshole with some sweetness somewhere inside. Hawke is more of a nice guy dumping himself in punishment. He’s a perfect actor for this type of story because he specializes in playing likable fuckups. Yeah, I’m a bad cop or father or I’m yuppie scum or I made a huge mistake in the past or I moved my family into a murder house without telling them or whatever but I’m a goofy likable regular dude who means well, we can be buddies, can’t we?

And the action is definitely more satisfying than in CRIMINAL. The poster saying “from the producers of JOHN WICK” refers to Thunder Road Pictures, who have a pretty good track record, having also been behind THE TOWN, SICARIO and WIND RIVER. It does not refer to the 87Eleven action team, but these guys do a very good job in their own right. Director Brian Smrz is a stuntman (he was in EXTERMINATOR 2 and THE PROTECTOR!) and stunt coordinator who was second unit director for several American John Woo movies (M:I 2, WINDTALKERS, PAYCHECK) and X-MEN movies (ORIGINS, FIRST CLASS, DAYS OF FUTURE PAST, APOCALYPSE) as well as LIVE FREE OR DIE HARD and IRON MAN THREE. Here he delivers on some tense shootouts (the numerous head shots are pretty gnarly even though they’re digital), some fighting and some particularly good car-crash related mayhem. This is not the Seagal type indestructible action hero approach – this is the one where he’s constantly bleeding and limping and trying to stay alive long enough to shoot some more guys. Skin-of-the-teeth asskicking.

But truly it’s the story that had me. The writers are Jim McLain & Ron Mita (SNIPER 2; McClain was also a henchman in SUPERFIGHTS) and Zach Dean (DEADFALL – the Eric Bana one). They manage to be serious about showing violence in a negative light without making it a total fucking bummer to watch. There’s a scene where Travis gets some Capetown street soldiers to help him, that familiar trope where a gang uses their guns against the bad guys and it’s supposed to be a stick-it-to-the-man triumph (see also: METEOR MAN, MONEY TALKS). Except in this one Travis’s medical condition causes him to collapse right as the shit goes down and he’s on his knees helplessly as a battle erupts around him in slow motion. You really feel the weight of all these Africans dying for being willing to help this private security guy try to save somebody from the other private security guys. Very upsetting.

And the relationships are a little more complicated than you think at first. Jim seems to be the villain all throughout, but right when Travis is coming to confront him we see a flashback of Jim being the one to tell Travis about his wife and kid having been killed. And it really starts to seem like there’s more to him than we assumed. I was genuinely torn about whether it made sense for Travis to kill these people. Do we want to see him get revenge or do we want to see him find peace?

I won’t say what it is but when Travis makes his decision he has a line that would seem hilariously nonsensical if you missed that opening conversation on the beach. In context it’s beautiful in its honesty and strangeness, a transcendent video-on-demand moment. I demand more video like 24 HOURS TO LIVE.

special thanks to Sternshein for tipping me off to this one

Brian Smrz Ethan Hawke Paul Anderson Rutger Hauer Tyrone Keogh Xu Qing
This entry was posted on Wednesday, November 29th, 2017 at 10:37 am and is filed under Action, Reviews, Science Fiction and Space Shit. You can follow any responses to this entry through the RSS 2.0 feed. You can skip to the end and leave a response. Pinging is currently not allowed.