Basically BLAST is DIE HARD on an oil rig. Or maybe UNDER SIEGE on an oil rig, but not ON DEADLY GROUND. Anyway the important thing is instead of Bruce or Seagal, we got wisecrackin Eddie Griffin. You know, from MY BABY’S DADDY. Now look, I wouldn’t watch 99% of the shit this guy has made. But I do think he can be funny. I’m more of a POOTIE TANG man, but I liked him in UNDERCOVER BROTHER. And his standup movie/family documentary DYSFUNKTIONAL FAMILY was funny. Here, he has a couple good smartass lines, but mostly plays the action hero. 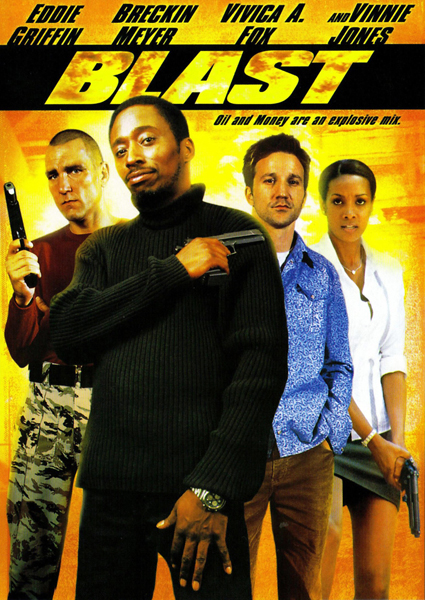 That’s what had me excited about the movie because Eddie Griffin’s a little guy, nobody’s gonna be threatened by this man. And the box calls his character Lamont “Dix” Dixon a “former Navy Seal.” Turns out they meant to say that at one point he jokes that he is a former Navy Seal, then says, “No, that’s Steven Seagal.” You gotta wonder. Did the marketing people know that Dix is not a former Navy Seal, but have some kind of marketing rule that says movies about former Navy Seals are profitable? Or did they think ha ha ha, Eddie Griffin as a Navy Seal, that’s hilarious, people are gonna want to rent that as a joke? Or did they just not watch the movie, and guessed what it was about based on the cover art? Any of these are possible.

Anyway, Dix is a tug boat captain who’s towing the oil rig when it gets taken over by mercenaries (“Vinnie Jones, SWORDFISH”) pretending to be eco-terrorists. But in the tradition of Darren McCord (SUDDEN DEATH) and Forrest Taft (ON DEADLY GROUND), Dix gets his terrorist fighting skills from his past as a fireman. A Navy fireman, to be fair, putting out fires in Desert Storm. And he got to swing around on ropes alot, he says.

We know Dix is a firefighter because he keeps having flashbacks to explain why he has a kid. See, his friend died in a fire and he had to adopt one of them white kids that wears a backwards cap. The kid has a high pitched voice and I’m pretty sure that at least a couple times he was dubbed by an adult woman like on the old Godzilla pictures. He wears regular length shorts though. Also I’m gonna go ahead and give away that at the end he helps save the day flying on some kind of paraglider contraption that he got for Christmas.

Yes, like DIE HARD, this one takes place at Christmas. I’m gonna let it slide though because it was written by Steven E. De Souza, who had a hand in the first two DIE HARDs, and because it’s based on a German TV movie that took place at Christmas. Maybe that’s why they refer to Father Christmas at some point. If you were wondering where Eddie Griffin movies come from, apparently they are remakes of German TV movies.

Unlike the John McClane model, Eddie Griffin doesn’t work entirely alone in this one. Halfway through he teams up with a bumbling ex-hacker (they actually call him a “cyberthief”) played by Breckin Meyer. On the outside they got Vivica A. Fox with the FBI, sitting in one of those command rooms looking up stuff on computers and explaining stuff.

Vinnie Jones is a generic ruthless bad guy, not really getting to show his sense of humor. His main henchman is the great Tommy “Tiny” Lister (you know, Deebo) but he’s mainly just in a couple scenes. And I don’t understand why he yells “Trick or treat!” when he fires a grenade. It’s Christmas, man, you’re gettin your holiday traditions mixed up. You gotta say like “God rest you merry gentlemen, motherfucker!” Something like that.

Also, they didn’t do this in the original Die Hards but post-Matrix, they always gotta have a hot chick that wears black and does karate and flips and shit. Think of the chick with the blue makeup in HALF PAST DEAD for example. It’s very important to have a girl terrorist in this one because her job is to have all the fight scenes with Breckin Meyer. At one point she’s fighting this guy and she’s doing handsprings and cartwheels and shit. And I thought lady, you’re fighting Breckin Meyer. You don’t gotta dazzle him with acrobatics to get him off balance. This guy couldn’t even get Garfield to stop picking on him. That fuckin cat treats him like garbage, insults him to his face all day long, he comes home from work and makes the cat lasagna. People with regular, friendly cats don’t even do that kind of shit. This guy is a pushover. But somehow he beats her so I guess maybe she was right to be doing flips. Sorry lady, you know what you’re doing I’ll cut out the backseat driving.

It’s really great that they were able to get De Souza to write this one, because that way it’s not just another DIE HARD ripoff. Instead, it’s just another DIE HARD retread. By now De Souza could probaly be handcuffed in the trunk of a car and could use his mouth and jumper cables to scratch this one into the paint. In proper screenplay format, too. Without spelling errors. He knows what he’s doing and he puts all the standard detail and twists for this type of plot, and he and director Anthony Hickox make it seem a little closer to a theatrical movie than most DTV stuff these days. It’s definitely alot better than Seagal’s latest SUBMERGED, which also had Vinnie Jones and was directed by Hickox. I don’t know if it was the Breckin Meyer factor or what but this one is more competent.

One complaint, I could use more crazy shit. De Souza knows how to dish it out, we know this because he wrote KNOCK OFF, the movie that capped off Jean-Claude Van Damme’s brief surrealist period. If you haven’t seen that one, it involves terrorists putting bombs in the rivets of jeans. And Van Damme pulls Rob Schneider around in a rickshaw while Schneider whips his ass with an eel. Kind of hard to explain. This is more like a regular human being movie, but it has a couple good touches like the paraglider I mentioned. Also, you know that type of scene where terrorists take over and suddenly the janitorial staff or whoever turns out to be in on it, and they pull out hidden weapons? In this one, most of the guns are hidden inside Christmas presents, but there’s one turncoat that’s a cook, and he pulls a gun out of a pot of spaghetti. And it’s got spaghetti hanging all over it while he shoots. I wonder how long he was stirring that damn spaghetti waiting to pull the gun out?

My favorite unexplained touch: escape pods. I swear to Christ, there is a scene where the bad guys say “Get out the escape pods,” and they open up these big crates and they got two rockets in there. Nothing ever comes of this and I actually had to rewind it to prove to myself that I was not crazy, they really did have escape pods. And I was right.

One thing that’s weird, the head of the oil company turns out to be in on it, and he text messages Vinnie Jones with updates on everything the feds are doing. Also he tries to run off with a briefcase full of money, or something. But at the end Vivica Fox laughs and decides to let him go, and he gets to make a speech about how he’s shutting down the oil rig because sometimes environmental concerns must trump economic concerns. It’s true to life, because this guy is a total scumbag crook, involved in the murders of innocent people for money, and they let him get away with it. It would make a good ironic ending but the music leads me to believe it is not supposed to be ironic, it is supposed to be a regular happy type ending. I don’t get it.

Anyway, the main appeal to this movie, if any, is Eddie Griffin. I don’t think the little guy should start doing action movies, but he does a good job with the role he’s been handed. He has a couple wisecracks that actually made me laugh, but mostly he wears a nice black turtleneck and grimaces like he’s Wesley Snipes. He even has a scene where he has to cry over the little white kid. And of course, he gets to do slow motion grenade kicking, swinging on a chain shooting like Chow Yun Fat, and that kind of crap. It’s pretty good.

The “explosive fun and non-stop action!” hits stores THIS TUESDAY. So be prepared. Trick or treat.

that’s all I got today,

p.s. Moriarty, I genuinely didn’t mean to “call you out” in my last review like you said I did… I would like to take this opportunity to publicly UNCALL OUT Moriarty. No hard feelings bud. If you’re still mad, why don’t you and the family come over, we’ll watch BLAST, we’ll play cards, whatever. You gotta pay airfare though. And I ain’t changing no diapers.

Anthony Hickox Breckin Meyer Die Hard on a ____ DTV Eddie Griffin Nadine Velazquez Steven E. de Souza Tiny Lister Vinnie Jones Vivica A. Fox
This entry was posted on Tuesday, July 26th, 2005 at 1:33 pm and is filed under Action, AICN, Reviews. You can follow any responses to this entry through the RSS 2.0 feed. You can skip to the end and leave a response. Pinging is currently not allowed.