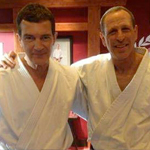 (For what it’s worth, most of the delay was caused by gridlock, and he was honking his horn alot. It was mostly out of his control.) 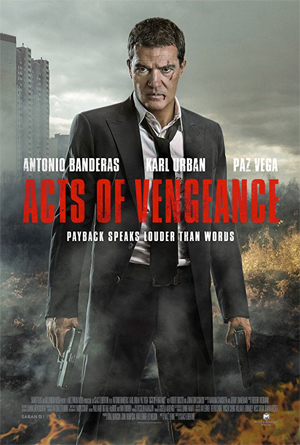 But he never sees his wife and daughter again. They’re found murdered. At the funeral his father-in-law (a mean cameo by Robert Forster [UNCLE SAM]) basically tells him to go fuck himself and never even think of talking to him at any point ever. The police (specifically Johnathon Schaech of ROAD HOUSE 2: LAST CALL fame) don’t have any leads, and it’s expensive to rent three billboards about it so instead he goes to a bar and gets drunk and wanders downstairs where there’s some underground fighting going on. (It would be amazing if Boyka or any other UNDISPUTED character was seen in the cage, but no dice.) Here he learns that a good way to deal with his grief is to provoke the fighters into beating the holy hell out of him.

I told you it got a little weird. And how bout this: after using a copy of Meditations by Marcus Aurelius to plug a stab wound, Frank becomes enamored with the philosophy of Stoicism and vows not to speak another word until he avenges his family. In his life as an attorney he’s contributed more than his fair share of jibber-jabber – over four times the average, according to the figures he gives in voiceover narration – and now he learns that “Good things do happen when you shut the fuck up for a minute or two.”

In fact, shutting the fuck up for a minute or two seems to give him super-human hearing abilities a little like Daredevil, which is completely absurd on a literal level but also kinda poetic in my opinion. If you stop trying to be the center of attention, stop telling, stop splaining, start listening and focusing and paying attention, suddenly you have access to facets of the world you have always ignored.

And by the way, he never lays out any rules, but he doesn’t cheat. No sign language, no charades, no Pictionary. Frank just interacts with people who are okay just talking to him and looking at his grim expressions. Maybe an occasional slight nod for “goodbye” because shit is too serious right now for waving.

I mean, I gotta respect screenwriter Matt Venne (WHITE NOISE 2, MIRRORS 2, FRIGHT NIGHT 2) for writing a movie about this. It’s a good mix of reliable revenge template and intriguing oddness.

It turns into a vigilante/detective thing with Frank snooping around for clues, following people, also befriending an ER nurse (Paz Vega, THE SPIRIT) and a cop who moonlights as a cage fighter (Karl Urban, PATHFINDER). Urban looks burlier than usual – did a guy that does STAR TREK movies and shit really train this much for a DTV movie? I hope so.

When Frank decides to change his life he moves his dumb car out of the garage and replaces it with equipment so he can start working out and training. During a montage, Florentine himself appears as Frank’s karate instructor, showing off a bunch of the type of fast kicks the heroes and anti-heroes of his movies do. (I thought I say him later in the ring, too, but I guess it was just a guy who looks kinda like him. It would be cool if it was him though because it would be the guy who taught Frank how to fight getting casually pounded down by a guy he’s gonna have to fight.) 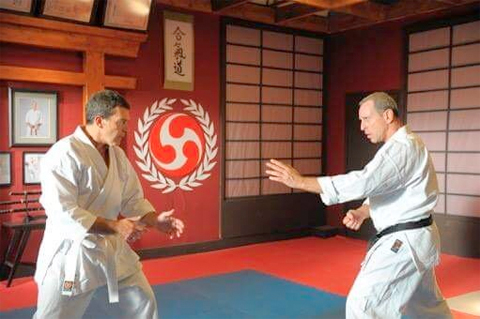 The fight choreographer is Tim Man (NINJA 2, BOYKA), who is also seen training Frank in the montage. I like that Man gives Frank more skills than are realistic for such a short period of training, but also gives his fights a sort of THEY LIVE street fight quality – lots of picking up and slamming, rolling, smashing into things, hitting or stabbing people with things. The climactic fight between Frank and the main villain (SPOILER yeah obviously it’s Urban END SPOILER) is really well done with some long shots where it is visibly Banderas, not a stunt double, doing several moves in a row. Good job Banderas. We got a regular Charlize on our hands here.

There are little hints of current controversies involving police and race. We hear Frank mention systemic racism while talking about a case at the beginning. Urban’s character says he cage fights because “Way people feel about cops – sometimes I just gotta blow off steam.” And Frank himself gives the most significant beating of the movie to the one major black character (Clint Dyer, SHOPPING) who turns out to be just an innocent homeless working man caught in the middle. At the same time there is frustration with bad people who are not cops getting away with things. It’s not completely clear if Frank was ever a crusader for justice, but he definitely had some cases where he got actual killers off. (One headline says “on a technicality”.) Only now does he see the shame in this.

But the movie’s strongest themes are more personal: the idea of grieving, of blaming and punishing ourselves, of vengeance and trying to be the better man. As you can see from the dedication at the end, Florentine suffered a tragic loss during filming, and it certainly seems like he’s working some things out with this movie. It may be speaking in low budget action movie language, but what it’s saying is very heartfelt.

R. Emmet Sweeney at Filmmaker Magazine did a good interview with Florentine about the movie

Antonio Banderas Cristina Serafini DTV Isaac Florentine Johnathon Schaech Karl Urban Marcus Arelius Paz Vega Robert Forster Tim Man
This entry was posted on Tuesday, November 28th, 2017 at 12:24 pm and is filed under Action, Reviews. You can follow any responses to this entry through the RSS 2.0 feed. You can skip to the end and leave a response. Pinging is currently not allowed.

10 Responses to “Acts of Vengeance”