The new cut is not drastically, hugely or monumentally different. If you hated the theatrical version you’ll still hate this one. The story is the same, I didn’t notice any scenes removed or added, there’s no new narration or a corny shot of a unicorn that’s supposed to make you see the whole movie in a new light. McClane still doesn’t make good on his threat to beat Kevin Smith’s character to death – not even in a deleted scene, unless it’s one a them “easter eggs” and I just didn’t find it. I’ll keep looking. 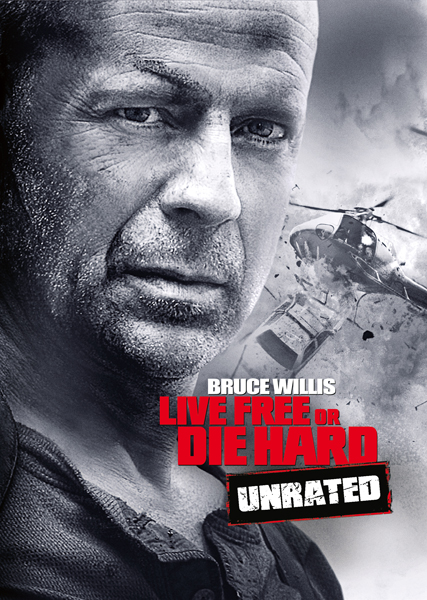 But what it does have is a whole bunch of little touches they never should’ve had to cut in the first place. Things most people wouldn’t notice but that add up to more of a DIE HARD tone overall. Like, for example, the hemoglobin. It sprays sometimes when people get shot. It squirts when the guy from DISTRICT B13 gets shredded (but it’s subtle, it’s not the Johnny Depp in NIGHTMARE ON ELM STREET geyser I imagined). After Maggie Q shoots the technician at the power plant she squeakily wipes blood off his screen with her hand. That was my favorite little addition. After McClane throws this character Russo down the stairs and then steals his walkie talkie they show his whole bloody face instead of the tamer profile of the PG-13. When McClane finally takes out Gabriel there is a bloodspray this time, so it’s a little more clear what’s going on, although I still think they should’ve shown it from the side so you see both parties getting shot (the one part where I thought Len Wiseman blew it with his staging).

More important than the blood, though, is the fuck. The fuck word. The fuck bomb. The most important four letter word in the English language. You know how they say Eskimos have 100 words for snow? Well, McClane has twice that many ways to use the word fuck, and he exercises a couple of them here. Which is all we asked for, 20th Century Fox. Would it really have skinned your balls so bad for us to have heard him say motherfucker a couple times in a theater with our fellow world citizens? Of course not. I think we have all learned a lesson here. Mostly you. Just don’t do it again, fuckers.

The unrated cut also uses some alternate takes, so like in the DVDs of those Judd Apatow comedies you might be missing your favorite line. I was disappointed that he now tells Russo to take a nap. He used to sarcastically tell him he was going to get him a doctor. They even changed one of the movie’s more quotable lines, where he says he killed the helicopter with a car because he was out of bullets. I won’t spoil the new line but I thought it was a pretty good one.

Speaking of that scene, there’s a little added that improves it I think. He’s in the car, taking fire from the helicopter, and the car goes up in flames. That happened before but now it’s made more clear in a longer shot and McClane says, “Car’s on fire. That can’t be good.” I like that because it shows he has no choice but to jump out of the car. So it seems a little more sensible when he does it.

The extras on the DVD are pretty decent. There’s a commentary with Bruce, Wiseman, and the editor. It’s not fascinating or anything but they tell some good stories here and there and you find out things like that Wiseman was against McClane flying a helicopter. (I agree.) There’s a really long making of documentary, so in-depth that even I got bored. But at least they’re not skimping. I do wish they talked to the writers and had more on the DISTRICT B13 guy. The stunt supervisor mentions that his jump to the fire escape was really done in one shot, but that’s about all they say about him.

My favorite extra is actually Kevin Smith’s interview with Bruce. I think this was the one that was online when the movie came out, but I never watched it. Although I hate Smith in the movie, he does do a good interview. They also specifically discuss the legendary Walter B talkback, which I’d like to think I had a little something to do with. (please hold applause until end.) When Smith tries to say that we talkbackers “care too much” about DIE HARD Bruce disagrees with him. But still does not beat him to death. Unless it happened later that day.

Also I was glad that they included that awesome DIE HARD music video that about a hundred people sent me the link to. There’s even a goofy featurette on “Guyz Nite,” the band that made it. The video now includes a verse about LIVE FREE OR DIE HARD but otherwise is the same badass collection of clips you saw on Youtube.

And there’s other extras I haven’t gotten around to yet, like some special from the Fox Movie Channel that’s hosted by Moriarty’s friend Tom Rothman. And for some reason they made it so you can burn a digital copy of the movie to your computer. Whoah, HIGH TECH! So it’s not a bad 2-disc set.

Despite my fears about the rating, I enjoyed LIVE FREE OR DIE HARD when I saw it last summer. So does it hold up? I still think it’s a fun movie, and I love seeing McClane in action again. But I’ve seen it 3 times now and that might be too much too soon. I don’t agree with Bruce and Kevin Smith that it’s better than the other sequels. But I can’t necessarily say it has less re-watch value, because I usually wait a year or two between viewings on the other ones. I do know that without the surprise factor the action in this one has a little less impact, and the scene with Kevin Smith gets more grating every time. It’s such an obvious joke, and they already covered that territory earlier when McClane made fun of Matt for having dolls in his apartment.

Therefore, I would like to take this opportunity to change my stance on that. I originally said that I didn’t blame Kevin Smith for saying yes, because how could you turn down being in a DIE HARD movie? But now I see that one must sometimes sacrifice for the greater good. If you are a wacky guy and they ask you to play a wacky guy in the sequel to a movie you love, you gotta say no. That’s the rule from now on. Or “the code of the streets” you could call it if you want to feel cool. Whatever you call it, the point is this: just because you got lucky doesn’t mean you should ruin it for everybody else. This includes but is not limited to sequels or spinoffs of:

or any other movie you can picture being ruined when Kevin Smith shows up (i.e. most)

I don’t mind you being wacky in private, just don’t go rubbing my face in it in public.

Bruce Bruce Willis Cyril Raffaelli Len Wiseman Maggie Q
This entry was posted on Monday, November 19th, 2007 at 5:17 am and is filed under Action, AICN, Bruce, Reviews, Thriller. You can follow any responses to this entry through the RSS 2.0 feed. You can skip to the end and leave a response. Pinging is currently not allowed.

8 Responses to “Vern’s review of the unrated LIVE FREE OR DIE HARD dvd, where you’re allowed to say mother&*#$@%!!!”