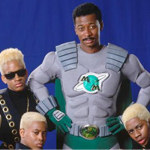 Nice character detail: he has one of those car stereos that you pull out and carry around with you.

His best friend is science teacher Michael (Eddie Griffin, URBAN JUSTICE), who provides speculative exposition about Jefferson’s super powers when he gets them (and loses them), but mostly he’s a normal Eddie Griffin character, talking shit and angling to use his connection to super-herodom to pick up women.

The gang is the Golden Lords, led by Simon Caine (Roy Fegan, HOUSE PARTY 3) and his henchmen Goldilocks (Academy Award nominee Don Cheadle, DEVIL IN A BLUE DRESS) and Pirate (Grammy winner Big Daddy Kane, POSSE). Part of me thinks it’s contradictory that Townsend projects a preachy outrage about crime in black communities but depicts this gang in a cartoonishly over-the-top manner, but I can’t fault him since the Lords are easily my favorite part of the movie.

Jefferson’s first encounter with the gang starts when he sees two little boys from his class beating up a woman to steal her purse. When he tries to intervene he hears a rhythmic metallic sound coming from the darkness, then a row of shiny shoes stepping into the light – five teenagers all wearing black suits, sunglasses and earrings, with bleach blond hair, and they stand in a line. These are the Junior Lords, played by the kiddy rap group Another Bad Creation. Then six similarly attired (but with Michael Jackson-esque buckles and studs and stuff) adult men step out and line up behind them. Then we see what the sound is: a golden Slinky that Caine is playing with like some kind of rejected Bond villain.

But it keeps escalating, because a fuckin tiger walks out on a chain. And then we see that the man holding the chain is Tiny Lister!

(*at a glance they look like Bart Simpson lunchboxes, but pausing reveals that it’s a cartoon tiger standing at the chalkboard)

Then they all take their sunglasses off at the same time, so he runs like a coward and hides in a dumpster. When he climbs out hours later he gets hit in the chest with a green, glowing piece of a meteor (should he actually be Meteorite Man?) that totally fucks him up. But after a couple days of hospitalization his skin and bones are miraculously healed and he quickly starts to notice strange new abilities.

He’s very strong. He’s impervious to bullets and Tiny Lister fists. He can understand and speak to his dog. He can see through walls and clothes. He can touch a book and know all of its contents for 30 seconds. He can fly, but he’s afraid of heights so at first he just flies along the ground.

Becoming a super hero is kind of a community effort. His dad (Robert Guillaume, COSMIC SLOP, SUPER FLY T.N.T.) inspires him to take a stand against the Lords. His mom (Marla Gibbs, BLACK BELT JONES) sews his costume. He has one of those silly trying-on-different-outfits-and-his-friends-shake-their-heads-no montages, and I imagine cosplayers must by offended by this because it implies that she can just make a whole bunch of elaborate getups in one day. At first they’re of the wacky colander-on-the-head variety, then out of the blue she has a completely professional costume with logos and padded muscles that apparently are indestructible since nothing gets damaged when bullets bounce off of him. For good measure his dad or someone molds him a new phone with a slick 3-dimensional MM logo on the keypad. Impressive and unnecessary.

He patrols and stops guys from stealing TVs and what not, but the thing I haven’t seen before is when he goes onto a vacant lot, moves some rusty abandoned cars, uses a broken chassis or something to trowel the dirt, infuses the soil with his meteor powers and creates a rain cloud so that a garden of giant vegetables grows over night. Also he interrupts a huge shootout between the Bloods (Naughty By Nature), the Crips (Cypress Hill) and the police and, by deflecting all their bullets, awes them into solemnly laying their guns down and stepping forward as a slow dissolve implies a thoughtful discussion of their differences.

The news sings “the flying man”‘s praises, the neighbors throw him a surprise party, but the Lords get angry and he realizes he has escalated things and endangered everybody. They convince him that he can’t block all the bullets, especially once his powers start to drain.

The climax is a super-powered battle that ties together all the powers and other threads in a jokey way, but still seems pretty much serious. I have to give away the finale because I love how corny and ridiculous it is. SPOILER. Meteor Man is surrounded by gun-toting old school mobsters who the Lords work for, led by Frank Gorshin (Batman) in a pretty mega performance. But suddenly Meteor Man gets the upper hand when the Bloods and Crips literally fly in in a convertible and point to the rooftops, which are lined with dozens of gangsters carefully arranged to be red, blue, red, blue as they stand up one by one and cock their guns.

As heartwarming as the gang truce is you gotta be a little hesitant about the triumphant music accompanying this heavily armed militia. I’m surprised if Robert Guillaume is down with this. But I think this is the first movie dialogue for future DTV star Treach (LOVE AND A BULLET, TODAY YOU DIE, CONNORS’ WAR, ART OF WAR III) and it’s funny when B-Real gets his one line because it really sounds like it’s dubbed by somebody else. 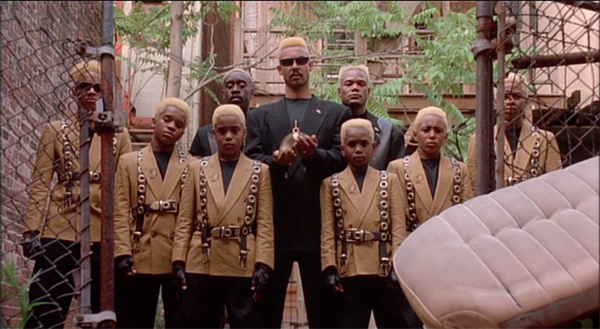 Like CONEHEADS earlier this same summer, the movie has an impressive number of cameo appearances. In addition to the people I already mentioned you got Sinbad (also in CONEHEADS), the jazz singer Nancy Wilson, Luther Vandross, Jenifer Lewis, Biz Markie (credited as playing himself, but he’s running a drug factory!), Beverly Johnson, Lawanda Page, Lela Rochon, Wallace Shawn, John Witherspoon, Faizon Love, and this is a bad time to bring this up but Bill Cosby plays a hermit who secretly finds and holds onto the remains of the meteorite, giving him his own powers. Also you don’t see him and he’s uncredited but Chris Tucker’s voice is heard emceeing an event where Eddie Griffin pretends to be Meteor Man.

Also, it predates GET ON THE BUS by three years in having the opening credits over a new Michael Jackson song (the very Teddy Riley “Can’t Let Her Get Away”) that it seems they weren’t allowed to put on the soundtrack album. Unless they just thought nobody had heard of him or something.

Though it didn’t have as much of a marketing push, THE METEOR MAN had a budget almost as big as CONEHEADS. That’s gigantic for Townsend, who had only done the micro-budget HOLLYWOOD SHUFFLE and the modest THE FIVE HEARTBEATS, and the production value is pretty good. There are legitimate stunts (stunt coordinator Jeff Ward [BLADE, GHOST DOG, PAID IN FULL]) and some gruesome makeup effects by Tony Gardner (THE BLOB, I COME IN PEACE, NIGHTBREED, DARKMAN).

There was a novelization (for kids) and a six-issue spin-off comic book series by Marvel, which hopefully goes into more detail about his jazz trio and how he uses his powers for jazz. 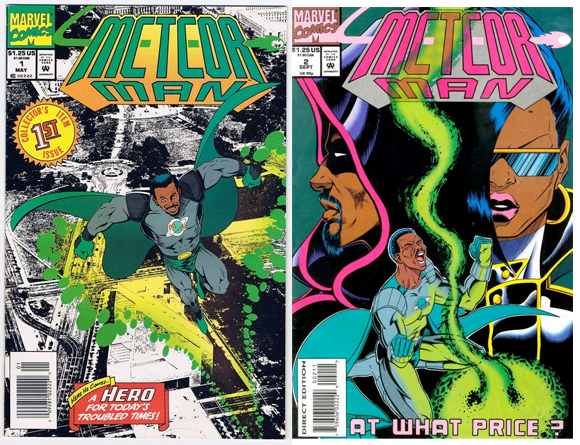 And yes, this is true – there was a Meteor Man action figure. 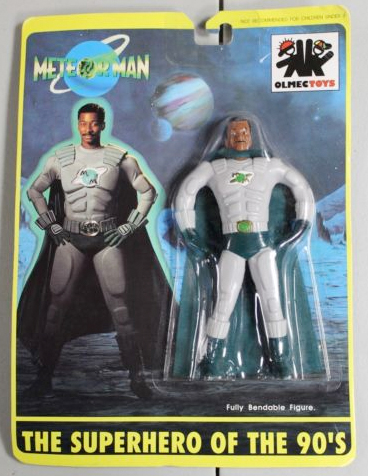 I was curious about this, so I looked up Olmec Toys, and it turns out they were the largest black owned toy company until they went bankrupt in the ’90s. They were founded in 1985 by a woman who was disappointed not to find any black action figures for her son. So their business model was “ethnic” toys including Martin Luther King and Malcolm X figures (which came with podiums and audio tapes of their speeches). They also had some interesting lines that were, uh, inspired by popular toys of the era.

THE METEOR MAN opened against THE FUGITIVE and came in 9th place for the weekend. It at least outperformed the other big debut that week, MY BOYFRIEND’S BACK. Like SUPER MARIO BROS., it didn’t come close to making back its budget, and was absolutely buried by a mob of 1993 summer smash hits including SLEEPLESS IN SEATTLE, CLIFFHANGER, THE FIRM, and of course JURASSIC PARK, which became the all time highest grossing movie until TITANIC overtook it in 1998.

I mean, I was happier with JURASSIC PARK and CLIFFHANGER too, but I kinda liked this movie at the time and I still kinda like it now. It’s less ridiculous than STEEL but with a similar positive attitude and a more specifically African-American perspective. It ought to work for a wide audience of all cultures, but it has those little touches like Sinbad being an Afrocentrist poser to get women, or like Jefferson wearing a Howard sweatshirt. It was cool to imply that he was an alumnus of a historically black university, though Townsend himself had gone to the University of Illinois before dropping out to act and make HOLLYWOOD SHUFFLE.

If anybody thinks this is an all-out comedy, I have to point them to the emotional climax where Simon Caine tried to kill Meteor Man’s dog and he’s laying there almost dead and the neighborhood gathers around and watches Meteor Man see through to the dog’s broken ribs and realize he doesn’t have enough power left to heal him. Townsend means it. So there aren’t that many big laughs, but the combination of sincerity and occasional absurdity is pretty appealing. The joke that cracks me up most is the look of Mr. Moses. At the beginning he’s self conscious about his baldness and trying on different wigs. He chooses a very tall hi-top fade, and then for almost the entirety of the movie he dresses and acts like a young man. Basically, it’s James Earl Jones at age 62, but dressed like Radio Raheem, or wearing a Public Enemy t-shirt.

Yeah, I’m not gonna try to talk anybody into watching this, but I have one of those certain fondnesses for it. I’m content with that.

Big Daddy Kane Don Cheadle Eddie Griffin Frank Gorshin Marla Gibbs Robert Guillaume Robert Townsend Roy Fegan Summer Flings Tiny Lister
This entry was posted on Tuesday, June 13th, 2017 at 11:09 am and is filed under Comedy/Laffs, Comic strips/Super heroes, Reviews. You can follow any responses to this entry through the RSS 2.0 feed. You can skip to the end and leave a response. Pinging is currently not allowed.

20 Responses to “The Meteor Man”