THE TOWN is a real well done, more-realistic-than-most crime drama. Not exactly a heist movie, because although it’s leading up to an elaborate caper it’s not as much about the planning and executing of the thing as it is about the people who do it. It’s also one of these movies people from Boston make where they’re real anxious to show off every last detail about the Boston neighborhoods and culture. I haven’t been there much so I got no clue how accurate it is, but it seems believable enough. There’s a part where they have coffee at Dunk’n Donuts, that part was real I know.

Based on a book called Prince of Thieves by Chuck Hogan (they changed the title so nobody would be disappointed that Sean Connery didn’t have a cameo as the king at the end), “the town” of the title is Charlestown. Some text at the beginning tells us that this little neighborhood is the real life home to a ridiculous number of armed robbers, then some other text during the end credits tells us but really guys, there are many hard working non-criminals in Charlestown, how come you don’t go see a movie about them, huh? I was trying to remember which other movie it was that had to have a “hey, seriously though, let’s not generalize” disclaimer like that, and of course later I remembered it was MARKED FOR DEATH’s apology to Jamaicans.

The story is about this guy Doug and his four man armored car/bank robbing crew. There’s no time wasted fucking around like we haven’t seen the trailers. Right at the start they’re putting on scary Halloween masks and storming a bank. Jeremy Renner from THE HURT LOCKER is Jem, the oh-shit-he’s-going-too-far of the group – the Mr. Blonde, the Tupac in JUICE. So he kidnaps the bank manager (Rebecca Hall from VICKY CHRISTINA BARCELONA). We learn how unplanned this was the first time they meet up later and one of the guys asks “Are we taking hostages now?!” like a worker pissed off about a shitty new company policy.

They took the girl’s driver’s license, and they get freaked out later when they realize the address is like four blocks from where they live. Doug takes the assignment of staking her out to make sure everything’s cool, but he starts feeling sorry for her traumatized crying. I don’t know if everybody noticed this or not but there’s something in this scene I don’t think I’ve ever seen before. She’s doing laundry and sees a blood stain on her shirt, and obviously we know she’s thinking about the robbery. We see her face but her neck is also exposed to the camera, and if you look you can actually see goosebumps appear on her neck. Now that’s acting.

Anyway he feels bad about the goosebumps so he strikes up a conversation, next thing you know they’re dating. So it’s like one of those romantic comedies. At the end he’s probly gonna get told off, then have to win her back with a big speech about how yes, he just met her to make sure she couldn’t make him as the bank robber who terrorized her, but once he got to know her something happened that wasn’t part of the plan… he started to really love her. Then he’ll have to publicly serenade her and/or chase her to the airport.

I mean, this is not a documentary, there are trace elements of the Hollywood bullshit. He’s got a childhood backstory that he finds some resolution for at the same time as he’s getting out of the game, that’s pretty convenient. And this girl seems to really fall for him, I don’t think it’s supposed to just be Stockholm Syndrome, and I’m not sure I buy that. Also there’s a noble sacrifice that’s more thrilling-movie-drama than believable-turn-of-events. But none of this is too bad. It’s not Tony Scott or nothing. It feels very authentic for the most part.

I like that the FBI agent (John Hamm) doesn’t have some big mystery to solve. He figures out who the thieves are pretty easy and quick, but can’t prove it yet, and “we can’t get 24 hour surveillance unless one of these idiots converts to Islam.” He’s a good character because he’s good at what he does and he’s not some prick that you’re supposed to hate, like, say, the prosecutor in FIND ME GUILTY. But he’s got a little bit of doofus in him so it can be entertaining when he gets outmaneuvered, even though by all rights we oughta be rooting for him.

That’s the other thing. Doug is more a classic anti-hero than the noble thief the book title implies (unless that’s used ironically). I mean yeah, he’s more principled than Jem, and he does care about the girl, and he is trying to get out. But he’s not a good guy bank robber. He doesn’t have some good reason for what he does, and his tragic backstory doesn’t lead him to crime. And he’s not even charming like Clooney in OUT OF SIGHT or something. He’s a mean bastard. His version of doing the right thing is, like, a home invasion and severe beating of some assholes who harassed a girl he likes. And (SPOILER) he could easily come out of the movie without killing anybody, but he makes a conscious decision to execute a couple of guys. It’s very satisfying, especially since it has one of those “if I ever see you again, I’m gonna…” type of setups that are often used in movies without payoff. But I don’t think it’s something he absolutely had to do. He just does it to be safe.

He’s also very professional in the sense that he’s gonna hope not to hurt anybody, but not hesitate to spray at cops or security guards. And I don’t think he cares too much about his partner pushing a bank manager’s face in with a rifle butt.

Maybe the most damning is that he’s gonna leave town without a girl that Jem seems to think is his daughter. He gets pissed off and says she’s not his daughter, but the fact that Jem brings it up means something. I mean, does this girl think you’re her dad? And don’t you have some major hangups based on your mom leaving you? These kind of things come up without too much explanation or nudging to the audience. Good, understated shit.

This is not a slick movie, and the criminals aren’t glamorous. They’re ugly, they have shitty tattoos, their girlfriends wear too much makeup and hoop earrings and need to get off the fucking oxycontin. And it’s not shown during the movie but I’m pretty sure they’re all really into House of Pain. And possibly THE BOONDOCK SAINTS. Probly not part 2, but I’m pretty sure they own part 1. They also show no signs at all of spending all this money they steal. You almost wonder if this is really better than working at the rock quarry.

The movie is directed by Affleck, and he did a good job. Good gritty atmosphere, tense and pretty clear explosions of violence, good acting performances, good pacing, real kick-in-the-teeth serious tone with a little bit of humor to make it go down better. But you know, I heard he did a good job on GONE BABY GONE, so that wasn’t that surprising that he could direct. What did get me is how credible Affleck is in the movie as a badass. I honestly got nothing against him, he seems like a real likable and funny guy, he’d make a good politician if he didn’t have videos of drunkenly hitting on entertainment reporters. But I think about him in that ridiculous movie DAREDEVIL, or even SMOKIN’ ACES where I was so happy when his dipshit character got killed… I’m just amazed at how good he is here. Yeah, he obviously bulked up his shoulders, and he learned a gravelly voice and kept his dialogue pretty spare. But I think the real secret was mastering this facial expression: 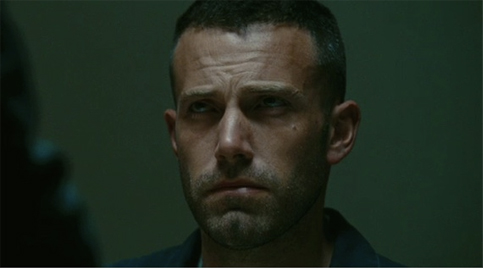 Holy shit, I think he’s starting to look like Scott Adkins, too:

Maybe it’s the subconscious fear of kicking that makes him such a good protagonist. But I don’t think so. I think it’s that he’s a very capable character. He knows how to handle shit and he gets right to it without saying much. When the girl, not knowing he’s one of the thieves, asks him if she should tell the FBI a piece of information that she didn’t mention before, his advice is ultimately self-serving but it also clearly comes from a vast reserve of knowledge about how to outsmart cops. When he decides he needs to fuck somebody up, he doesn’t hesitate, and the movie doesn’t either. They just jump right to it.

I got a theory, his partner Matt Damon left him behind to go star in some Clint Eastwood movies, so Affleck is thinking “how am I gonna get him back?” and he decides well shit, I’ll try my damndest to be Clint Eastwood. He directs himself in this tough guy role, and he’s probly taking piano lessons.

Damn, Daredevil, you’re a real filmatist. I’m impressed. What was that Robin Williams thing he got the Oscar for? Am I gonna have to watch that shit?

Ben Affleck Boston heists Jeremy Renner John Hamm
This entry was posted on Monday, September 27th, 2010 at 1:50 am and is filed under Crime, Reviews. You can follow any responses to this entry through the RSS 2.0 feed. You can skip to the end and leave a response. Pinging is currently not allowed.