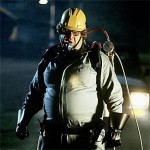 I didn’t enjoy part 2 nearly as much as part 1, but some bad movie aficianados may like it better. Part 1 is clumsy and raw, but part 2 is just cheesy and stupid. But it’s way more ridiculous. This time there’s no cop character, there’s just The Exterminator going around like a masked slasher killing criminals. In the first one I think he used a welding torch for a little American style perfecly legal and ethical interrogation techniques. In this one they act like a welding mask is his Jason mask and a blowtorch is his Freddy glove. The creepy part is he only appears after they’ve committed crimes, and it’s even said “it’s like he was waiting for us.” So you wonder why he doesn’t intervene before some gangsters murder an innocent elderly couple. Instead he just waits outside so he can light them on fire after they’re done. (Trivia: One of the first guys he lights on fire is played by Reggie Rock Bythewood, writer of GET ON THE BUS, director of BIKER BOYZ.)

Then when he’s in his daily life the movie just acts like he’s a great guy, and not crazy. Not even a little tormented. He doesn’t seem to have a job anymore. Not sure how he pays for his blowtorch fuel.

The bad guys are a gang led by a guy named X, played by Mario Van Peebles. This is where the movie is most ridiculous – X thinks he’s in the future. He wears post-apocalyptic clothing such as ROAD WARRIOR shoulder pads made out of tires. He always stands in super-hero type poses, he does flips, he has an X spraypainted on his bare chest, he throws a guy under a subway and then dramatically puts his forearms into an X shape. He makes his gang carry torches around and makes big speeches to them. He has a messiah complex – this I know because he says “I am the messiah.” He must’ve seen THE WARRIORS so he makes a big speech about how by everyone working together they can rule the city. But he has a big ego so he actually says “Together, I can rule the city.”

In one respect he actually is ahead of his time: he wears a version of a hi-top fade in 1984, a couple years before they became popular. But otherwise I think he’s just a sci-fi nerd. Might as well be wearing a Star Trek uniform.

The movie wants to be like THE WARRIORS or CLOCKWORK ORANGE by exaggerating how bad and psychotic the inner-city crime gets. One nice touch is that they shoot down a police helicopter. But it’s all so cheap looking. The first one was the kind of cheap that makes it kind of more authentic, this is the kind that makes it less. It’s one of those movies that takes place in New York but it seems like nobody lives there except the main characters of the movie.

Of course the gang ends up paralyzing his stripper girlfriend and killing his Steve James-like garbage man friend, so he has to get revenge, even though he was already trying to kill them anyway so the revenge part is kind of redundant. He already drove his friend’s garbage truck alot, now he soups it up with a bulldozer front, armor and machine guns. But even though this sequel ups the ante in over-the–topness it pulls back in other areas. There’s lots of lighting people on fire but little to no gore. He puts a guy in the back of the garbage truck, and you think it’s gonna be a new take on his famous meatgrinder stunt from part 1, but then he doesn’t even crush the guy.

And all of this might be great but it also has one of those terrible 1984 keyboards-trying-to-rock-out type of scores from beginning to end. And for me that’s kind of a dealbreaker. It’s a pretty funny movie but I’m more of a part 1 type I guess.

crazed veterans
This entry was posted on Sunday, February 10th, 2008 at 11:32 am and is filed under Action, Crime, Drama, Reviews, Thriller. You can follow any responses to this entry through the RSS 2.0 feed. You can skip to the end and leave a response. Pinging is currently not allowed.