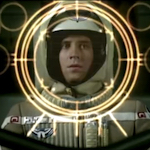 If you hear he lives in a trailer park you could reasonably assume there would be some kind of class themes in this story, but there’s really not. There’s no clash with the rich kids, and the park, called Starlite Starbrite, is far from a hellhole. In fact it’s a delightful place full of nice, quirky people who form a huge crowd and applaud for Alex when he beats the high score on the game. That he wants to get out of there is underlined by decorating his room with posters of Hawaii and Paris (along with the expected toy space ships and mobile of the solar system). Making it seem like a pretty cool place to live is a weird choice, but I like weird choices. 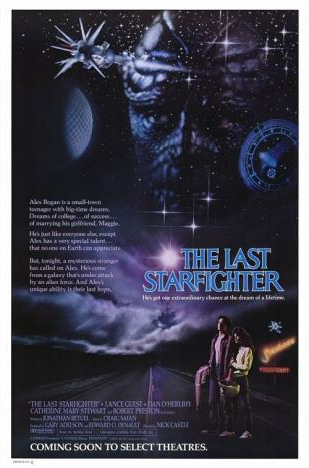 Guest is fine, but his character is almost instantly unlikable. He keeps ignoring his way-out-of-his-league girlfriend Maggie (Catherine Mary Stewart right before NIGHT OF THE COMET) to brood or play the game, and she’s frustratingly forgiving about it. He poutily refuses to go out with her and a pickup truck full of their friends, which would be fine if he didn’t condescendingly say it was because “I’m doing something with my life.”

After he makes that high score a mysterious dude (Robert Preston, THE MUSIC MAN, SEMI-TOUGH) shows up in a futuristic car, introducing himself as Centauri, inventor of the game, and convinces him to come for a ride. The car transforms into a spaceship and goes to the Rylan Star League space station full of different types of aliens who are also good at the game and now ready to join a real star war against those motherfuckers the Ko-Dan Empire, who are trying to get past the force field called The Frontier, as commanded by the Rylan traitor Xur (Norman Snow, MANHUNTER).

I was worried we weren’t gonna see Maggie anymore after that, but there’s a whole subplot back on earth, where Alex has been replaced by a “Beta Model” duplicate android to hide his disappearance. The robot doesn’t know how to act like a real person, so he almost gets caught by Alex’s little brother Louis (Chris Hebert, INVADERS FROM MARS), and now Maggie’s boyfriend seems like even more of a drip than before. This poor woman. The best part involving the Beta Model is when we see him still transforming into Alex and he’s a weird bug-eyed dummy inflating itself.

Alex is supposed to partner with a lizard man named Grig (Dan O’Herlihy, ROBOCOP) to fly a ship called a Gunstar. Very much not to Alex’s credit, he says he’s not interested and asks to be taken home. I know this is supposed to be the traditional rejecting of the call, but we’ve already had a first act of him being a depressing drain on everyone he knows on earth, whining about “doing something with my life” and dreaming of the stars, and now he has that opportunity and doesn’t like that either. Okay then, Goldilocks.

While he’s home, all his space pilot acquaintances except Grig get blown up. Centauri comes to pick up his Beta Model just as they’re being attacked by a Zando-Zan (you know how those Zando-Zan fuckers can be) and sacrifices himself to save Alex. More Zando-Zans will be coming, and now that it affects him, Alex finally decides to help. Later, the Beta admits his robotness to Maggie, and proves it by getting shot and having circuitry visible in the wound. And they crash a pickup truck into a space ship. Epic science fictional adventure like that.

There’s plenty to like here. The production designer is Ron Cobb, known for his design work on STAR WARS and ALIEN (not to mention the DeLorean in BACK TO THE FUTURE), so there are cool looking space suits and ships and stuff. The score by Craig Safan (FADE TO BLACK, REMO WILLIAMS, A NIGHTMARE ON ELM STREET 4) reminds you how much legitimacy the old school orchestral scores could add to any movie. And most notably it’s unique as the one and only movie from that era where the space battles are done with computer animation. It doesn’t have TRON’s advantage of taking place inside a computer and being able to be more stylized, but it holds up surprisingly well.

According to my research there are 300 scenes containing 27 minutes of digital animation – a process that was so new the company that created it had the generic name “Digital Productions.” They had split off from TRON company Triple-I, in search of more computing power, and had previously worked on THE JUPITER MENACE and THE ICE PIRATES. They followed LAST STARFIGHTER with work on 2010: THE YEAR WE MAKE CONTACT, LABYRINTH and a Mick Jagger video, before being bought out by Toronto’s Omnibus Computer Graphics in ’86 and then closing shop in ’87.

Centauri’s vehicle, “the Starcar,” is real, though. It was built by Gene Winfield, who also made the cars in BLADE RUNNER, the 6000 SUX for ROBOCOP, and a show car called The Reactor that was used in episodes of Batman, Star Trek, Bewitched and Mission: Impossible.

I only wish the characters and mythology were as novel as the vehicles. It’s all pretty boilerplate alien space war shit, making for a movie with many dull stretches. It doesn’t help that I’m not a big fan of two of the templates it uses:

1) The space movie that only takes place in space ships and doesn’t land on any cool planets (see also WING COMMANDER).

2) The sci-fi or fantasy movie that introduces a fantastical world but is mostly about ordinary earthling teenagers in some boring ass small town (see also MASTERS OF THE UNIVERSE). 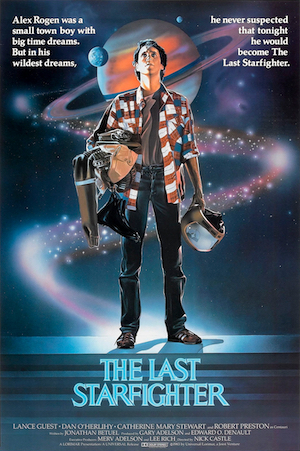 Castle was born in Tennessee, son of a choreographer for many Hollywood musicals (including a bunch with Shirley Temple). He went to USC, where he met John Carpenter, both working on the short THE RESURRECTION OF BRONCHO BILLY in 1970, working as camera assistant and controlling the alien beach ball in DARK STAR, and co-writing ESCAPE FROM NEW YORK. This was Castle’s second movie as director, following TAG: THE ASSASSINATION GAME. (Today his most recent directorial work is the 2006 DTV movie CONNOR’S WAR starring Treach of Naughty By Nature as a blind secret agent.) It’s the first screenwriting credit for Jonathan R. Betuel, who went on to write and direct MY SCIENCE PROJECT, THEODORE REX, and some episodes of Freddy’s Nightmares.

I guess we know the movie wasn’t a total airball, since it was still circulating drive-ins a year later, but it came out at a pretty inopportune time: when it opened at #3, it was below GHOSTBUSTERS and GREMLINS, both in their sixth weeks! The rest of the top ten consisted of THE KARATE KID, THE MUPPETS TAKE MANHATTAN, INDIANA JONES AND THE TEMPLE OF DOOM, BACHELOR PARTY, CANNONBALL RUN II, CONAN THE DESTROYER and STAR TREK III: THE SEARCH FOR SPOCK. And the next month saw the release of THE NEVERENDING STORY, PURPLE RAIN and RED DAWN, so it’s not surprising STARFIGHTER didn’t quite double its $15 million budget.

But I think there’s some nostalgia for it. Somebody made a musical. Gary Whitta (THE BOOK OF ELI, AFTER EARTH, ROGUE ONE) has tried to develop a torch-passing sequel. We’ll see about that. America’s still waiting for RETURN TO CANNONBALL RUN.

There was a novelization by Alan Dean Foster (DARK STAR, THE THING, KRULL, THE CHRONICLES OF RIDDICK), a comic book adaptation, a cheap ass target set, and a board game called The Last Starfighter: Tunnel Chase. The end credits promise an arcade game from Atari, but reportedly when their people saw the movie they thought, “Oh shit, this is not gonna be a hit movie,” so they ditched the game and later released the home versions under the titles Star Raiders II and Solaris (no relation to the Tarkovsky movie, unfortunately). Eventually there was a Nintendo game named after the movie, but that was a retitle of a game not based on the movie. And finally someone made an unauthorized freeware imitation of the game seen in the movie, which you’d think would be what they would’ve done in the first place.

Video game high scores (specifically on Pole Position) were still important to THE GOONIES and D.A.R.Y.L.

The Beta Model scares the little brother about giving away his secret by threatening to “Tell Mom about your Playboys.” So maybe the Playboys in GOTCHA! and RAPPIN’ were a theme leftover from 1984, and that’s why they haven’t come back into play so far.

Catherine Mary Stewart Chris Hebert Craig Safan Dan O'Herlihy Jonathan R. Betuel Lance Guest Nick Castle Norman Snow Robert Preston Ron Cobb
This entry was posted on Thursday, July 2nd, 2020 at 9:33 am and is filed under Reviews, Science Fiction and Space Shit. You can follow any responses to this entry through the RSS 2.0 feed. You can skip to the end and leave a response. Pinging is currently not allowed.

20 Responses to “The Last Starfighter”