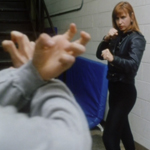 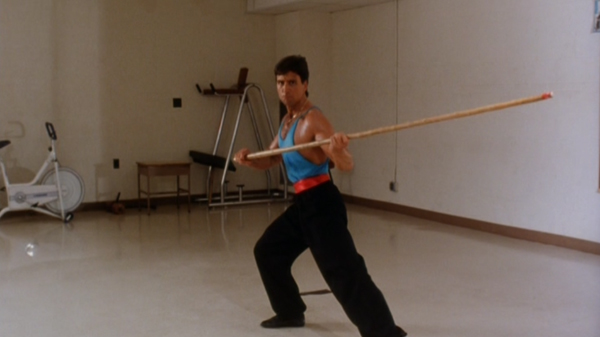 Rothrock still dominates even though they feel the need to put a token dude in there for weirdos who don’t think she’s enough. According to Wikipedia, the Chinese-dubbed version BLOODY MARY KILLER also adds Robin Shou [MORTAL KOMBAT] in a whole other plot! Just in case. As Detective Jessica Undefeatable, Rothrock calls upon all her experience as an actress and martial arts champi– nah, just fucking with you. Sorry. Actually, Rothrock is improbably cast as leather and stud wearing street gang leader/top fighter Kristi. I don’t think they say her last name so I guess it could really be Undefeatable. I suppose that’s what we should assume.

Her gang might be called the Nasty Girls and Nasty Boys judging by their customized headwear – I’m not sure if there is a collective non-gendered name for them. Maybe the Nasties or the Nasty People. As far as we see they don’t sell drugs or commit crimes other than this fighting competition, which at first involves special rules where you win by forcing your opponent to touch the ground with any part of the body other than feet. 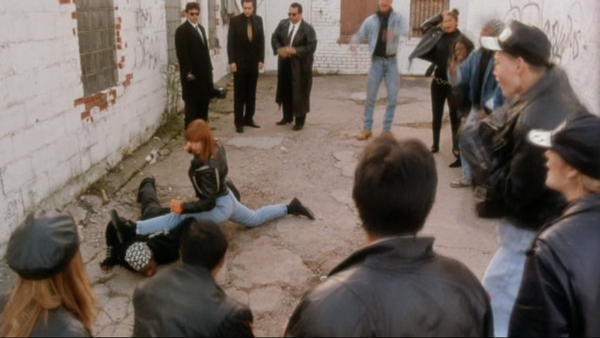 The other gang members gather around and do a pathetic clapping and foot stomping thing that’s hardly a substitute for taiko drums. Later there’s some chanting that’s equally wimpy) We know these guys are dangerous though because they wear leather jackets and jeans and drink sugary drinks. 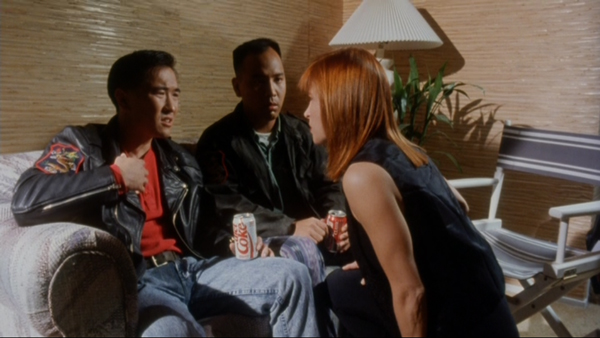 When you’re a street tough like that there are no rules. So Kristi just has to accept that this guy Bear (Scott Shelton, also in HONOR AND GLORY) can wear football pads during a fight. 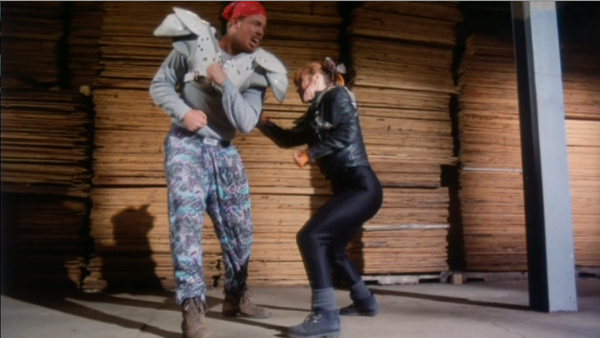 I guess if he didn’t he wouldn’t look like much of a Bear.

Although Kristi talks tough with a slight New York lilt, threatening to knock people’s teeth out and such, she is actually a sweetheart who’s on a first name basis with regulars at the diner where she waitresses and her money all goes toward college tuition for her sister Karen (Sunny David, who IMDb believes wrote the song “Whole Lotta Shakin’ Goin’ On” for Jerry Lee Lewis, which would surprise me since that Sunny David was a man and died 6 years before this movie came out).

The killer is Paul, street name Stingray (Don Niam, OUT FOR BLOOD, BAJA RUN), a wild-eyed domestic abuser, rapist and champion of a different fighting circuit that involves rings and promoters but is called “death matches” and then isn’t seen again after the opening. He seems to think he’s a great husband when he brings home flowers for his wife Anna (Emille Davazac), but then he calls her “Mommy” and rapes her while she’s trying to cook dinner, so she finally decides to leave him. That sets off his rampage against her, her psychiatrist (Donna Jason, yes, HONOR AND GLORY, also ABDUCTED II: THE REUNION), and various redheads wearing flower dresses who he confuses for her, coincidentally including Kristi’s sister Karen and the girlfriends of rival fighters (meaning he will get to use martial arts when he accosts them).

A couple of the women even fight back: 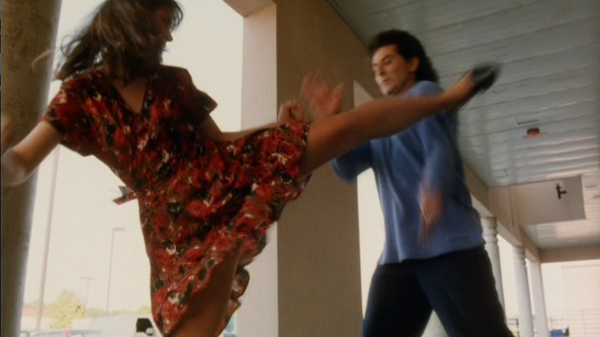 He thinks about his childhood trauma while holding “his mother’s pendant,” which is clearly a stopwatch but works as a music box playing an off key “Sound of Music.” It’s not as complex of an explanation for his condition as in BLACKBELT (or PSYCHO, DON’T GO IN THE HOUSE, NIGHTMARE, THE INITIATION, SLEEPAWAY CAMP, SILENT NIGHT DEADY NIGHT, SEE NO EVIL, PIECES, etc.) – she just abandoned him. Punky Brewster might’ve done this same shit if she knew kung fu.

Thankfully much of his abuse of women is off screen, other than stringing their arms up with chains and then practicing on his heavy bag for a minute. But he is doing some nasty things. This is discovered by his manager guy Lou (Michael Walter, EYE OF THE TIGER, THE REUNION) who comes to check on him after a missed meeting and discovers which body part this fucker has been collecting. “Shit! What’s Stingray have eyeballs in that fish tank for?” Lou asks himself out loud.

The detective work here is my favorite kind: the kind that uses martial arts blows as fingerprints. When Karen turns up dead, Kristi recognizes an eagle claw kung fu bruise on her body and goes to the northside to fight The Eagles (not the band, the gang). Or as she calls it, “I just needed some time to be alone.” Turns out those guys are innocent so she tries The Maniacs. But the police bring in a martial arts expert who says it’s actually a dragon claw bruise and gives a list of the only three Americans who know the style (all apparently living nearby).

Nick has a weirder and less successful investigation technique when Jennifer figures out that the killer might be her client’s husband but doesn’t know where she lives. “Do you remember her saying anything about the apartment we could use?” he asks. “For example particular noises, or odors, anything at all?”

What is he looking for, there? “You know, come to think of it she said that her apartment always smelled like cheese. Swiss cheese, I think.” “That’s it, the old dairy on the east side of town!” I mean come on, DiMarco.

Well, Stingray tracks down Jennifer before she does him, and abducts her. I’m happy to report that she pulls a FRIDAY THE 13TH PART 2 and pretends to be his dead wife, then mother. She tells him to be a good boy, to clean his room, to behave himself and be quiet, and it works, but he still chains her up and she has to be rescued by our heroes.

The two best reasons to watch the movie are the two duels at the end. The first takes place at Stingray’s secret kidnapping warehouse and gym where Kristi can jump across boxes, swing on chains and partake in his collection of weapons. There’s a moment that would be beautiful in a less cheesy movie where he cuts through a box with his kitana and both of them stand in samurai poses while styrofoam peanuts fall on them like snow. 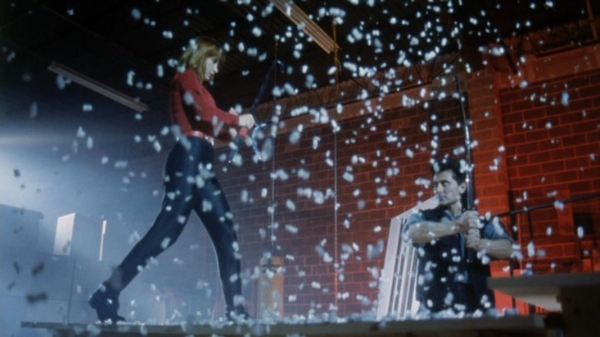 It’s laughable to suddenly go so stylized in an otherwas slapdash movie like this, but I like it. Good touch.

Suddenly Nick and his weinery partner are there shooting at Stingray, and he leaps and somersaults to his gun stash, which proves he at least has an ounce of honor back there in his crazy maniac brain because he was willing to have a fair fight with her. So I respect that too.

He gets away briefly but then they run into him disguised as a doctor at the hospital. It’s great the way it goes down: Jennifer is a patient and they leave the room but before they make it down the stairs Nick says “Ah. I forgot my sunglasses,” and they go back and discover Jennifer is gone and the cop on lookout duty is dead on the floor. To his credit, Nick rushes into action and leaves the sunglasses sitting there on the bed.

They catch up to him in the basement. Both Stingray and Nick tear their shirts off to fight bare-chested, Cindy uses a towel as a weapon, and it climaxes in the most beautifully stupid way that SPOILER SPOILER SPOILER involves Nick and Kristi each impaling one of Stingray’s eyes and then saying a one-liner: “Keep an eye out for me, Stingray.” “Yeah. See ya.” 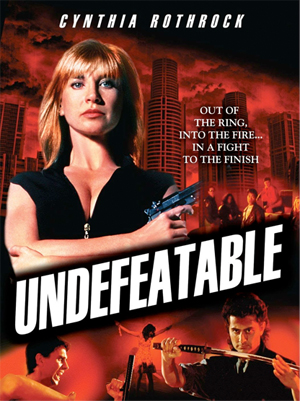 That’s definitely the part that’s for the record books (I had actually seen it on Youtube long ago) but I also recommend the sappy resolution scene. Kristi surprises her two gang buddies with the news that they start college on Monday (“I enrolled you”) and Nick surprises her the with news that she also does (“I enrolled you too”) and then they high five. I didn’t know that was how it worked but good for them.

Sometimes I enjoy a little historical context, and it’s funny to consider what movies the major action icons had playing theaters this same year. Schwarzenegger had TRUE LIES, Stallone had THE SPECIALIST, Mel Gibson had MAVERICK, Van Damme had TIMECOP and STREET FIGHTER, Seagal had ON DEADLY GROUND, Snipes had DROP ZONE, Lundgren had MEN OF WAR, Brandon Lee had THE CROW, even Charles Bronson had his last theatrical film, DEATH WISH V: THE FACE OF DEATH. Hong Kong martial arts movies were soaring: Jet Li had FIST OF LEGEND, Jackie Chan had DRUNKEN MASTER II and Michelle Yeoh had WING CHUN.

And meanwhile we have poor Cynthia doing this shit. She deserved so much better. It’s fun though. Recommended if you enjoy stupid shit.

Michael Walter, the stuntman and martial artist who plays Lou, wrote an autobiography in 2007 called Hollywood Stuntman Comes Clean: What Hurts the Most? and directed this autobiographical short in 2011 called Face the Fire: The Michael Walter Story.

Cynthia Rothrock Don Niam Donna Jason Godfrey Ho Michael Walter
This entry was posted on Monday, February 5th, 2018 at 10:41 am and is filed under Action, Martial Arts, Reviews. You can follow any responses to this entry through the RSS 2.0 feed. You can skip to the end and leave a response. Pinging is currently not allowed.