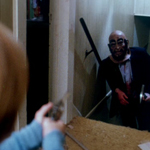 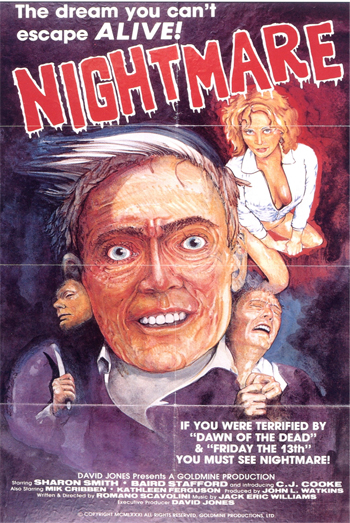 As different as it feels at the beginning, this is yet another slasher movie that follows the HALLOWEEN template. There’s the traumatic childhood prologue, then we skip to when the kid is grown up and has been in an institution. He escapes from a halfway house instead of a sanitarium, then he travels to the house where it happened, kills people along the way, makes hangup calls, watches from across the street, puts on a rubber Halloween mask (this one looks like Sid Haig), gets shot, gets back up.

Also it has a babysitter, but she’s not the heroine or the Final Girl. The focus is more on the little kids, which makes it feel extra creepy and unsavory. The little shitbag son C.J. (C.J. Cooke) plays the part of that popular slasher movie archetype, The Prankster Who Cried Wolf.

For example, there’s the incident when Mom is off having sex with her hippie boyfriend on a boat. She happens to call home just after C.J. came face to face with George while taking the garbage out. The sister tells her something happened and C.J. is dying. The scene goes on for quite some time with mom screaming in terror while being driven back to the house, the kid acting dazed and horrified clutching his bloody chest, and the audience having a pretty fucking good guess that he just coincidentally at that moment was playing a hilarious prank where he covers himself in ketchup and pretends he got stabbed.

I felt kind of bad for the boyfriend. I don’t get the impression that he’s serious enough about Mom to commit to this family, but he does a good job of trying to keep everybody calm and mediate after the kid has done this shitty thing. Also he references Antonioni.

In HALLOWEEN, young Michael Meyers murders his sister while she’s having sex with her boyfriend. That scene always gets credited for inadvertently leading to the sex = death theme prevalent in the sub-genre, where young people have sex and then get killed and it kind of implies that if they had been good little boys and girls and said their prayers and the flag salute instead of getting it on then this wouldn’t have happened. This movie has one of those scenes, and more sexually graphic than usual, with a shot of the dude’s ass with her legs wrapped around him. But it also has a different strain of that attitude that also stems from the HALLOWEEN opening: a kid walks in on adults (usually a parent or parents) having sex (usually kinky) and then that’s the cause or one of the causes of the kid growing up to be a psycho. It happens in this, THE INITIATION, SLEEPAWAY CAMP, MANIAC, SILENT NIGHT DEADLY NIGHT, I’m sure others.

It’s a weird thing to be so common, and arguably hypocritical. They’re making these graphic, sleazy movies but promoting a really Puritanical idea. These NIGHTMARE parents obviously should’ve been more careful about when to play their weirdo sex games, but I feel confident that parents-doing-it faux pas like that do not create maniacs. I bet it’s more of a boner killer than a killer creator.

It’s funny though that NIGHTMARE has this theme of kids being messed up by seeing things they shouldn’t, ’cause my buddy who recommended this claims he saw it when he was 9. I’ll keep my eye on him.

Like HALLOWEEN the climax is the masked killer invading the sanctity of the home, chasing them, chopping through doors (including a very SHINING-like scene that was apparently shot before THE SHINING came out). 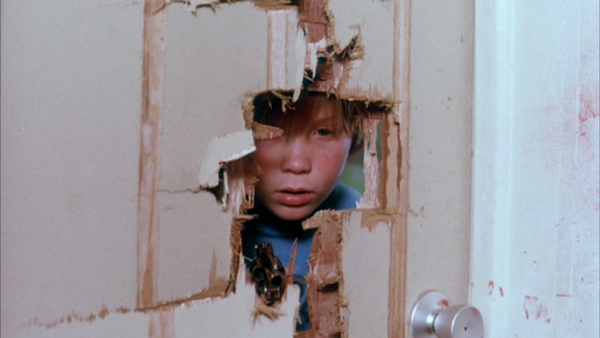 Unlike Loomis the psychiatrist (more of a school counselor type who monitors the patient from files on a super computer) never shows up. So, as you can see above the kid doesn’t have the luxury of waiting around for an adult to shoot the killer.

One goofy thing that made me laugh is they have the cliche where a character sees the masked killer and assumes it’s her boyfriend or whoever joking around. In this case she thinks it’s the little kid, C.J., who’s a couple feet shorter than this guy in front of her.

But C.J., who is running around in his Chicago Bears pajamas, apparently has access to his mom’s hand gun, because suddenly he has one, and he shoots the guy. Five times. And when George gets up and chases him again the kid shoots him another time. And then he goes into the closet and gets the rifle and shoots him two more times. 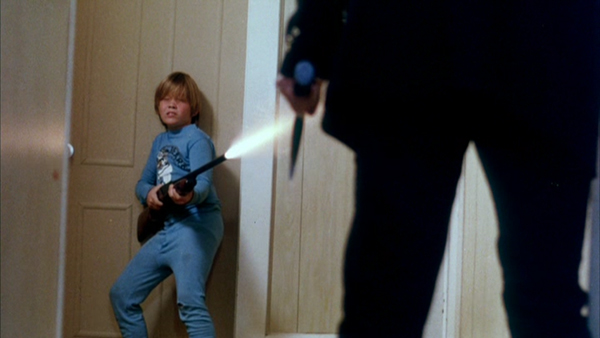 This is a movie that probly wouldn’t be made today, in my opinion. I only wish the kid had a cigarette too.

The ending is actually the most effective part. As George is dying we see the full, uninterrupted version of that flashback he’s been having, and yes, it is confirmed that little bow-tie-wearing Georgie (Scott Praetorius) chopped both his parents up with an ax. This kid seems more authentic than C.J. and is real good at cold, creepy expressions. And what he does is so over-the-top brutal and gorey that you gotta tip your hat. This movie is not fuckin around.

I also like the HALLOWEEN 2-esque aftermath scene, the police bringing the bodies out with all the neighbors gathered. Better filmatism and production value than many other scenes in the movie, so it really worked for me despite a corny final stinger.

The gruesome special effects are clearly the main attraction for this one. There’s a graphic decapitation and blood squirting neck stump, for example. So I wasn’t surprised that Tom Savini is credited as “special effects director.” But afterwards I read that Savini denies working on the movie and says it’s a piece of shit. Here’s a good article about the claims made by Savini vs. the claims of writer/director Romano Scavolini (DOG TAGS). There doesn’t seem to be a clear cut answer about what happened, but my interpretation is that Savini did consult them in some way and his suggestions had a major influence on the techniques of the movie but that he didn’t actually make the effects and resents them exploiting his name as if he had. Keep in mind, this was shortly after DAWN OF THE DEAD, FRIDAY THE 13TH and MANIAC, and he was doing THE BURNING and THE PROWLER that year (and EYES OF A STRANGER? Did I know he did that one?), so he was a rock star to horror fans.

Hmm. NIGHTMARE is not really what I am searching for in this Slasher Search, I don’t think it’s a very good movie. But it’s just wrong enough to be interesting. I think it’s fair to say that serious slasher fans should see it.

Note: the Code Red DVD includes both a 4 x 3 and a 16 x 9 version, with no explanation. I decided the narrow one was better, the 16 x 9 is cropped on the top and bottom. Heads seem awfully close to being out of frame, and in the scene where he walks through Times Square you can’t see all the great marquees, which include CHARLIE CHAN AND THE CURSE OF THE DRAGON QUEEN, FADE TO BLACK, KUNG FU MASSACRE, FIVE DEADLY VENOMS, SISTER STREET FIGHTER, CALIGULA, THE FOUR ASSASSINS, MANHUNT and STIR CRAZY.

Most of NIGHTMARE was shot in Florida, but taking a few days to open the movie in sleazy 1980 Times Square goes a long way toward establishing what type of movie we’re dealing with here. 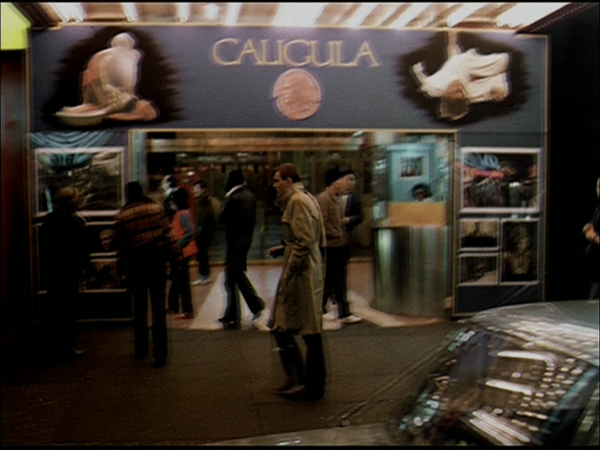 Slasher Search slashers Tom Savini
This entry was posted on Tuesday, October 21st, 2014 at 11:21 am and is filed under Horror, Reviews. You can follow any responses to this entry through the RSS 2.0 feed. You can skip to the end and leave a response. Pinging is currently not allowed.