I haven’t really kept up with this, but I heard something about Roger Ebert drawing a nerd fatwa by saying that video games aren’t art. From the sounds of it I think people should lay off the guy, because do you really want to convince Ebert to love video games and have him spend his last years playing Halo looking for its themes? I don’t want that, and I wish he’d cut down on the Twitter a little too. But I also hate these arguments about what art is, because any adult or teen should’ve figured out by now that there are people who define anything from a smiley face on your pancakes to the ceiling of the Sistine Chapel as art, and there are other people who have picky definitions about the difference between craftsmanship and true self expression. And trying to debate it leads to nothing but running around in circles and nobody acknowledging that one side defines everything as art and the other defines very few things as art. It’s stupid.

A good example is in the Maysles brothers documentary CHRISTO IN PARIS, where people stand on top of “The Pont Neuf Wrapped” arguing about whether or not it’s art. Watching the movie we can see that the fucking thing is beautiful, and these people are engaged in a discussion provoked by it. They are being thought provoked, it has caused them to think, to question their beliefs about art. But they don’t count that as art, so obviously they got a different definition of art than I do.

So why argue it? It’s like me debating Mr. Majestyk about what color Arnold’s suit is in RED HEAT when I’m color blind. To me the thing is bright blue but to him it’s green so it makes sense that James Belushi calls him Gumby. We just gotta acknowledge each other’s differing sight and let it go.

If you don’t like video games don’t play them, if you think they have the potential to move people then don’t worry about it. If somebody ever makes a video game as good as THE GODFATHER (movie, not video game) I’m sure it will be self evident.

So the real question is, is STREET FIGHTER: THE MOVIE art? And the answer, in my opinion, is blue. 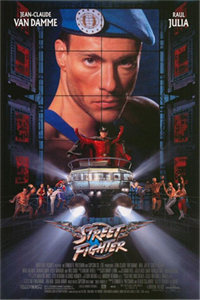 STREET FIGHTER: THE MOVIE is one of the Jean-Claude Van Damme pictures I never saw before now. It’s written and directed by Steven E. de Souza, often called “the writer of DIE HARD” even though he was one of many on that one. Really he’s more “the writer of KNOCK OFF,” but I can respect that too I guess. Credited as “based on the video game Street Fighter 2,” this movie is the story of a heavily armed junta led by a dictator named Bison (Raul Julia in his last role) who take a bunch of people hostage in a fictional Asian country called Shadaloo and demand $20 billion ransom. I know, at first I thought Shadaloo was a real country too, it sounds so real and natural. But I looked and I couldn’t find it on any maps.

At first I figured this guy Bison was so cruel just because he was born with such a stupid name, but when he announced that he wanted to conquer the world and rename it “Bisonopolis” I realized that he doesn’t have that kind of self awareness. He’s just an asshole.

Van Damme plays Colonel Guile, who leads a UN type group of soldiers in on a peacemaking/hostage-saving mission. His hair looks blonde in some scenes, so it’s a complete physical transformation like DeNiro in RAGING BULL. Like in UNIVERSAL SOLDIER, Van Damme teams with a female TV news reporter (Ming-Na from THE JOY LUCK CLUB), but she turns out to be Chun Li, a martial artist who secretly wants revenge on Bison for killing her father.

This is one of those weird movies of the ’80s and ’90s that try to be bold and stylized, with larger than life characters, special effects and scoring, but nothing ever really clicks. It’s on the screen and at this point it’s way too late to question whether or not anybody wants to see famous actors dressed up as, say, The Flintstones. Movies like this are more enjoyable watching it from a distance as a curiosity, trying to picture who they were making it for. The one really good part in this one is when Chun Li reveals herself to Bison only to find that he doesn’t remember the incident she’s talk about at all. And he has the great line that one of you quoted in some comments recently: “For you, the day Bison graced your village was the most important day of your life. But for me… it was Tuesday.”

That movie poster is pretty accurate. I think Bison stays in the one room for pretty much the whole movie, basically waiting for everybody else to show up. I guess they spent alot of money on all those TV monitors, they wanted to get some mileage out of them. I’m not sure which one, but one of Bison’s flunkies is named “Dee Jay” I guess. He kept yelling out “Deeee Jaaaaaayy!” and I kept expecting him to say “rewind that!” or “Drop that beat!” or something.

There’s an ensemble of other characters, like Byron Mann (BELLY OF THE BEAST, A DANGEROUS MAN) as Ryu, the singer Kylie Minogue as Beret Lady, Wes Studi as an arms dealer, the guy who played the terrible remake Leatherface as a mohawk guy, some guy that has a metal mask and Wolverine type claws, and various others as etc. Lots of guys who must mean something to people who played the game, but are just confusing and unexplained to the rest of us.

From what I understand the game is about fighting. The title is not supposed to be a metaphor, I don’t think. That’s weird because the movie doesn’t have any street fighting of any kind and very little off-road fighting for that matter. There’s some kind of underground fight tournament that some characters are supposed to be in at the beginning, but then they leave before the games begin. In my opinion it’s a bad idea to call a movie “Street Fighter” and then have a bunch of non-fighting leading up to Van Damme fighting Raul Julia. We all miss Raul Julia but I think most of us would agree that he was more respected for his acting than for his screen fighting skills.

Bison’s plan (besides waiting around making megalomaniacal speeches until he gets $20 billion) is to force a kidnapped scientist to use a magic science machine to turn Van Damme’s best friend into a green troll monster with orange hair, because obviously if you got one of those you can build Bisonopolis. He’s supposed to be Bison’s “perfect soldier,” so if you watch Van Damme movies you know that the ultimate soldier is either a dead guy (UNIVERSAL SOLDIER) or a green guy (this one). The only thing that could beat them would be a dead green guy, like a Frankenstein or something.

The plot is too plodding and messy for me to remember much about it. I do think it’s Van Damme’s only movie with two separate parts where it pretends he’s dead (one when he fakes his death for some reason, one when the others leave him behind in an exploding building and then figure it’s okay to just say he’s dead without really knowing).

Most movies like this tend to go way too big in their climax, some noisy business with missiles that are gonna blow up a major city or something like that. This one actually goes too small: the big surprise is that Bison uses magnets to fly around his room a little bit. Not that impressive, in my opinion.

Of course it’s too bad this was Julia’s last role, but at least he gets to ham it up and have fun. He has all the funny lines and he goes after them with guns blazing, he’s clearly the most entertaining part of the movie and arguably the only entertaining part. Van Damme’s actually the one whose talents are being wasted. He doesn’t get to fight or even do stunts nearly as much as in his other movies of the time period (this was the same year as HARD TARGET) and de Souza obviously wrote the script with more of a talker in mind. In my opinion Van Damme was not ready for the rousing “who wants to go home, and who wants to go with me?” speech that inspires all the peacemakers to refuse orders to make peace.

I can understand how this would be a beloved crappy movie to somebody who played the video game at the pizza parlor when he was 12 and went and saw the movie with all his friends or whatever. It’s a unique style of terrible and good for some laughs. But as an actual action movie or Van Damme picture it’s fucking OUT OF ORDER.

You see, like when a video machine game is broken. PLAY AT OWN RISK.

Byron Mann JCVD Raul Julia Steven E. de Souza video games
This entry was posted on Monday, July 5th, 2010 at 12:43 pm and is filed under Action, Reviews. You can follow any responses to this entry through the RSS 2.0 feed. You can leave a response, or trackback from your own site.