THE REUNION is another entertaining and kinda unexpected release from the prestigious WWE Studios. Even more than INSIDE OUT it doesn’t really follow THE MARINE’S approach of just sticking one of their wrestlers into the lead of a formula action movie. This one’s an ensemble crime comedy with only one wrestler, WWE Heavyweight Champion of the World or whatever John Cena, as Sam, one of three estranged brothers forced to work together in a family business to earn a big-ass inheritance. The other two brothers are Leo (Ethan Embry), a fast-talking fuckup bail bondsman, and Douglas (Boyd Holbrook), a James Dean type leather-jacket wearing, brooding, fresh-out-of-lockup half brother they didn’t even know about ’cause he grew up in youth homes. Embry wears an I’m-quirky-and-sort-of-retro hat like Michael Rapaport in INSIDE OUT or like a less boneheaded Matt Dillon in THERE’S SOMETHING ABOUT MARY.

Cena’s character is a cop who has just been suspended from the force for violations of the How Far You Can Go code. (He wouldn’t know about it because it’s in the book, and he doesn’t go by the book). There are a bunch of funny lines in the movie but my favorite is his commanding officer abbreviating the standard gun and badge request to “I’ll need your gun, etc.”

Ultimately Sam is a heroic character, ’cause he puts himself at risk to do the right thing. But he’s also kind of an asshole in a way that I think is interesting. His insults to his dead father and living brother are like his police work – a little bit over the line. Apparently his little brother is still traumatized by his cruel bullying when they were growing up, and he shows no remorse when he finds this out. Like Joel Edgerton in WARRIOR he’s accused of being a coward, leaving the family with an abusive father, but he was young and didn’t know what to do, etc. 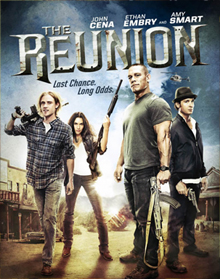 Amy Smart (Felicity), seeming a little more enthusiastic than in her last wrestler picture, THE HOUSE OF THE RISING SUN, plays their sister who loves them, flaws and all. She’s the executor of the will and she tries to bring them together and make peace. I don’t think that’s her on the cover though, I think that’s some other girl that’s in the movie. She never gets a gun ’cause she sits out the action. But she does convey a sweet, sisterly compassion in her scenes that makes it sort of believable that these lunkheads would humor her and give it a shot. (Although I guess it’s the money that really motivates them.)

The condition of the will is that the boys have to run a business together for 2 years before they get the money. This could’ve very easily turned into a movie about a bakery, a laundromat or a Dairy Queen franchise, but they just end up following a Mexican cartel guy that skipped bail on Leo. This gets them mixed up in the kidnapping of a millionaire (Gregg Henry). So Leo uses his bail bondsman knowledge but is always shown up by Sam’s detective work/guns and Douglas’s special skills that get them through doors. By that I don’t mean picking locks, I mean that women love him and help him out.

Cena’s muscles are distractingly giant, almost the male equivalent of those crazy watermelon-sized fake boobs they used to have in the specialty pornos. But it’s funny ’cause he still has some kind of everyman charisma. I think he’s gotten more comfortable on screen since THE MARINE, but maybe I’ve just gotten used to him. He doesn’t quite know how to deliver all the quick band-and-forth banter in this one, but he’s almost there. It’s not a Dennis Rodman situation. I liked him in this, and the playful insults and competition flying between the three brothers who probly, hopefully at least, really care about each other.

As far as this year’s slate of WWE pictures go, INSIDE OUT is a little more my speed. I like the way it fits into the old ex-con-getting-pulled-into-more-trouble type formula but adds little quirky tweaks and unexpected nuance. But this is an enjoyable movie that some people would probly prefer. Hats off to WWE Studios for trying out different things and at the same time improving the overall quality of their works. I hope they continue to grow and some day have a backlot tour to rival Universal’s. I look forward to THE MARINE 2: THE RIDE and the SEE NO EVIL Halloween maze.

Amy Smart Boyd Holbrook DTV Ethan Embry Gregg Henry John Cena WWE Films
This entry was posted on Wednesday, November 16th, 2011 at 1:16 am and is filed under Action, Comedy/Laffs, Reviews. You can follow any responses to this entry through the RSS 2.0 feed. You can skip to the end and leave a response. Pinging is currently not allowed.

6 Responses to “The Reunion”