MEN OF WAR is a Dolph Lundgren mercenaries-on-a-mission movie. In the surprisingly atmospheric opening Lundgren’s ex-Special Forces character Gunar is hanging out on the streets of Chicago, wearing a hat he could wear if the movie was set during the Depression, his breath showing in the cold air. Some tough guy rudely tells him to talk to somebody, gesturing to a limo. “In the back seat?” Gunar asks and when the answer is yes he bashes the guy’s head through the backseat window and leans in to talk to the passenger. So you don’t have to wait too long for the movie’s declaration of badass intent. 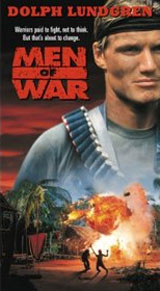 Basically some rich nerds (they seem like Microsoft guys) want to hire him to go into this island and get the natives to sign over the mineral rights or something. At first he says he doesn’t do that shit anymore but of course next thing you know he’s going around to different cities, to prisons and cage fights, recruiting his team. They include Tiny “Zeus” Lister and Catherine Bell from TV’s such-and-such. They fly in, get into some trouble with another special forces guy he used to know (Trevor Goddard, English-pretending-to-be-Australian guy from MORTAL KOMBAT) then try to talk to the natives. Of course, eventually Gunar will decide to side with the natives and fight for something he believes in instead of work-for-hire.

But first some funny shit starts happening, little clever touches that decorate a standard action movie structure and give it flair. You see, the script is credited to Ethan Reiff & Cyrus Voris and John Sayles. If you don’t know who Sayles is, here’s a quick primer. He’s known as an uncompromising and pioneering director of independent cinema. Nothing flashy, just smart movies for grownups, mostly dramas, things like PASSION FISH, THE RETURN OF THE SEACAUCUS SEVEN, EIGHT MEN OUT, LONE STAR. He also did BROTHER FROM ANOTHER PLANET but is better known for THE SECRET OF ROAN INISH. Part of the reason he’s able to make movies like that is his side work as a screenwriter and script doctor. He always gets the credit for the smart bits in PIRANHA, ALLIGATOR and THE HOWLING. He worked on THE QUICK AND THE DEAD. He wrote that insane JURASSIC PARK 4 draft that Moriarty wrote about a couple years ago. According to him the script was about “a DIRTY DOZEN-style mercenary team of hyper-smart dinosaurs in body armor killing drug dealers and rescuing kidnapped children.”

As far as I know there are no books or documentaries about the writing of MEN OF WAR (yet) but I got a hunch which parts Sayles wrote. It seems like the other guys probaly wrote a normal script, then Sayles came in to add some laughs. (UPDATE: Looks like I got it backwards – see the comments by “Perry” and “LA Movie Guy” below) There’s a part where they go to a bar that searches at the door – they confiscate all their guns and give them a number to reclaim them, like a coat check. There’s also a whole bunch of humor involving the natives not responding to the mercs the way they expect. They storm in with their guns and headbands and the natives keep saying “GI Joe? GI Joe?” Trying to put fear into the natives the mercenaries shoot up the village with a machine gun, but instead of being scared the villagers all applaud. They have sort of a spokesman (B.D. Wong I believe), a guy who speaks English, claiming he learned it from guys hanging out there writing a National Geographic article. This guy tricks Dolph and his guys into eating disgusting things and makes up fake or misleading oral histories. And he keeps calling Dolph “boss.” Really he’s messing with the mercenaries and with the audience by doing all the cliches you expect in a movie like this, but only as a joke.

And the biggest joke of all is the mcmuffin. At first you don’t know what the clients are after. Then there’s a hint that it’s jade, and I thought that was kind of cool. Usually it’s gold or diamonds or artififacts. Treasure. Not jade. But later you learn that it’s not even jade, it’s more unusual than that: they’re after the minerals created by thousands of years of bird droppings. This corporation wants to kill these people to steal bird shit! (The box says they’re after jade, by the way. I guess they didn’t think “fighting over birdshit” was marketable.)

The director, Perry Lang, mostly directs TV episodes. As an actor he had been in ALLIGATOR and EIGHT MEN OUT (and later SUNSHINE STATE), so maybe he brought Sayles in himself. I’m guessing Sayles came up with most of that stuff I liked, but who knows? Whoever it was they deserve respect. Another great part that could be any of the writers is the scene where the natives have a crazy-off with the bad guys. A mercenary dumps gasoline all over a hut, so a little girl goes ahead and lights it, to get it over with. The merc threatens to chop off somebody’s hand, so a guy runs in, chops off his own hand with an ax and cauterizes the stump in a fire. Basically, you can’t do anything to these people, they’ll do it first. They win.

I like Dolph in the movie, as always, and there are some other good people in the cast too. Along with Tiny “Zeus” Lister you also got Tom Wright (Charles, the Jamaican cop from MARKED FOR DEATH), and the great bad-guy actor Kevin Tighe plays Dolph’s mentor. And Goddard is kind of hilarious as the over-the-top villain who seems to take everything way too personally. The acting and production values are impressive for DTV – in fact I had to check to make sure it was straight to video. There’s a pretty funny turn of events and a good mano-a-mano fight between Dolph and Goddard at the end.

I do have to admit there’s a little something missing. If there were a couple classic action scenes this would really elevate it above others of its type. What’s there is pretty good at times but  not particularly memorable. Still, the weird sense of humor and clever tweaks on the formula are enough to make this stand out as a much better-than-usual DTV action movie.

Dolph Lundgren DTV John Sayles Tiny Lister
This entry was posted on Sunday, July 19th, 2009 at 11:33 pm and is filed under Action, Reviews. You can follow any responses to this entry through the RSS 2.0 feed. You can skip to the end and leave a response. Pinging is currently not allowed.