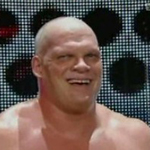 What could I possibly add to a review this good?

This is kind of a weird question, but have you ever thought there should be a movie about a big bald retarded muscleman with extreme religious views running around an abandoned hotel banging people against walls and plucking their eyeballs out? If so, today’s your lucky day, and SEE NO EVIL is your movie.

The retarded muscleman is played by Kane, not the rapper Big Daddy Kane but apparently a famous wrestler of some kind, making his acting debut. According to the credits he is playing “Jacob Goodnight,” a name they unfortunately never say in the movie. Like the character, the movie is big, dumb, almost definitely using steroids, and also way more fun than you would think. 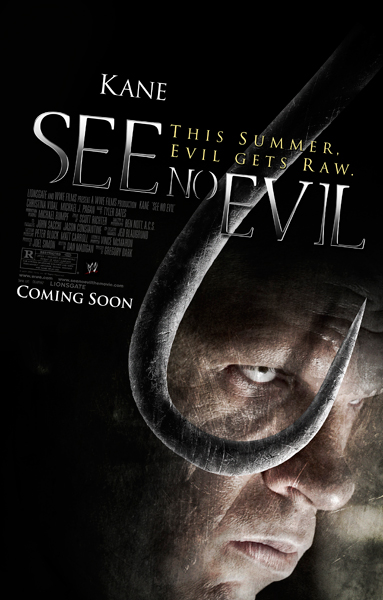 SEE NO EVIL is the first film from the prestigious WWE Films. WWE is what we used to call WWF until they got sued by the World Wildlife Foundation. I guess people must’ve been donating money to Hulk Hogan thinking he was gonna use it to save the pandas, but it all went straight into his 24″ pythons. I was hoping the WWE Films logo would be accompanied by rockin guitars and clanging metal hammers, then it would explode and spray sparks and flames everywhere, and maybe some skulls and demonic goatheads. It turns out their film division is a little more high-minded than the wrestling division though, so it’s a simple logo with the sound of an orchestra tuning. I mean I’m talking 100% class. Then the last shot in the movie is a dog peeing into a dead man’s eye socket. By the way this review contains spoilers.

The victims/heroes of the movie are a bunch of tough talking twentysomething juvenile delinquents straight out of a NIGHTMARE ON ELM STREET sequel, brought in to clean up a filthy abandoned hotel as part of their community service. They are accompanied by two surprisingly lenient correctional officers, one of them being a kind of cool stoic cop with an artificial arm. This guy is the most interesting character and, of course, the first to die. (At first it seems like they’re going for a funny twist where all the nice people die first and most horribly, and the assholes come out alive.)

The kids do almost no cleaning before they wander off to take part in various leisure activities:

2) Going up to the fire damaged penthouse to enjoy some of the ol’ illicit drugs and/or sex. It is hard to say what will happen to these characters.

For our entertainment, these activities are all interrupted by Kane, who will suddenly stomp out with a huge ax or a long chain with a hook on the end. A big bald dude just doesn’t have the same iconic presence as a Jason or a Freddy, but he’s a pretty entertaining villain because he really knows how to manhandle somebody. He is constantly dragging people by the hair or lifting people up by the neck, sometimes throwing people long distances or banging them against a ceiling or that type of thing. But he’s bad at judging distances so his victims always get a limb or a head closed in the elevator doors, or he clumsily bangs em against a wall going through a doorway.

Sometimes he’s treated like a t-rex, you hear him stomping in the distance. Other times he makes an entrance like he probaly does in wrestling. Like when he’s behind a two way mirror and suddenly appears in a dramatic pose, silhouetted holding a giant ax.

Director Gregory Dark (WHITE BUNBUSTERS, NEW WAVE HOOKERS, DEEP INSIDE VANESSA DEL RIO, BLACK THROAT, BETWEEN THE CHEEKS… yeah right, like I gotta explain to YOU guys who Gregory Dark is) unfortunately slathers the movie in the obnoxious style some call “nu horror.” Constant avid farts, whooshy camera move sound effects, random bleeps and blurts and buzzes and vibrating cameras. There’s alot of Kane’s-eye-view shots where everything is shaky and blurry. Ironically, the guy who collects eyeballs apparently needs glasses. One pretty hilarious show offy camera move is when a guy gets scared and takes off running with a steadycam attached to his face. For a minute it’s like Spike Lee did a slasher movie.

So yeah, it’s the same “sexually repressed killer gets riled up by teenagers screwing and smoking pot” thing we’ve seen in HALLOWEEN, FRIDAY THE 13TH and SILENT NIGHT, DEADLY NIGHT movies. But there’s a funny twist. This guy is so paranoid somebody might screw in his abandoned hotel that he has all the bedsprings hooked up to a system of strings and pulleys that rings a bell and tells him what room the fuckin is going on in. When it happens, he gets an outraged “What the fuck!?” look on his face. As if he never foresaw the possibility that these bells would ring some day. We have a code red.

As far as maniacs go he’s kind of a lovable oaf by the end, and Kane sometimes does a good job with the facial expressions (thankfully he barely talks). Other times he does wrestling style “make sure the guy in the back row can see it” acting. When he gets mad he puffs his cheeks out like a cartoon.

Although the characters, dialogue, story, camerawork, etc. are all incredibly fuckin stupid, there are a couple things in it that could be considered clever, including at least two really spectacular death scenes. I saw this at a free screening that was mostly empty. That’s something you don’t see too much, ’cause people would watch a documentary about picking boogers if you gave them a free hat and poster. But this small audience laughed throughout the movie and especially at Kane’s climactic, uh, smackdown. When I saw the ridiculous teaser trailer I thought this looked like a bad straight to video movie, but I was wrong. This is something you gotta see with an audience. Definitely the funniest and most consistently entertaining bad horror movie I’ve seen in a long god damn time.

I do have one complaint: there’s a scene where the bitchiest character gets force fed her cell phone. Unfortunately, we don’t get to hear the phone ring from inside her. It’s obvious, but it’s a wasted opportunity. It also would’ve been nice if the talk button got bumped inside her stomach and it cut to her friend on the other end saying, “Hello? Hello?”

That last shot I mentioned before, with the peeing dog, is a brilliant post-credits bonus shot. Except for some reason they got the idea that the type of people who would pay money to see a slasher movie starring a professional wrestler are not the same type of people who would stay and watch the credits. So they put it near the beginning of the credits, which kind of weakens the effect. Still, you gotta respect a horror movie that not only doesn’t show the killer come back to life at the end, but also shows his mutilated corpse being crudely defiled by animals. Like I said, 100% class.

That said, I swear on Jacob Goodnight’s piss-smelling grave that I would pay money to see him undead in a sequel.

I would like to congratulate WWE Films, the Dark Brothers, and everybody that goes to see this movie in the theater. That’s what this world needs more of: heroes.

If I could applaud over the internet, Vern, I would. Reading a review after you’ve had a great time with a bad film is like seeing the movie in a S. Morgenstern “Best Parts” version. I’m going to be in Seattle twice in the next two weeks, as I’m driving up to Vancouver and driving back, and I’m hoping I have a chance to stop and finally meet Vern face-to-face. You’re an outlaw and a gentleman, sir.

slashers WWE Films
This entry was posted on Friday, May 19th, 2006 at 5:19 am and is filed under AICN, Horror, Reviews. You can follow any responses to this entry through the RSS 2.0 feed. You can skip to the end and leave a response. Pinging is currently not allowed.