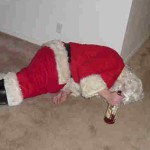 Silent Night Deadly Night is a mid-level entry in the holiday-themed slasher movie genre. It’s not a classic like Halloween but then again it’s not completely dumb like the Leprechaun pictures or Martin Luther King, Jr. Day Massacre which is not a real movie but would probaly be pretty stupid, in my opinion. Unless they got the right director but even then, I don’t know about that premise. 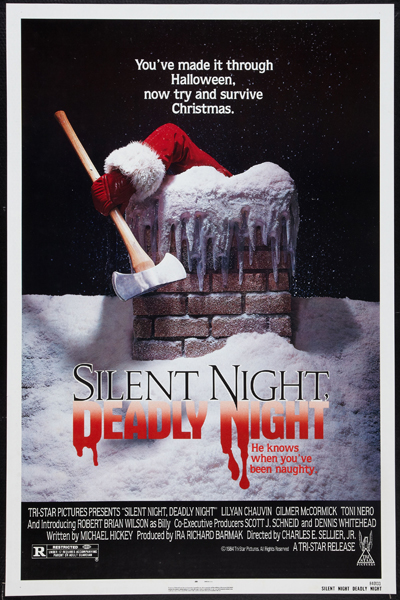 Basically what the movie is about is, they wanted to make a movie about a killer dressed as Santa Claus, so they went back and figured out all the psychological traumas that might lead to such a scenario. So they show how this kid named Billy is told by his crazy grandpa that Santa Claus punishes kids who aren’t good all year, and then right after that he sees his parents raped and killed by a criminal dressed as Santa, and then he goes to an orphanage where an abusive nun further instills the dogma of punishment and sexual repression into him, and then he gets pressured into being Santa for a toy store and gets drunk at the office party and rejected by a girl and next thing you know he’s go around with a fake beard and an axe yelling “punish” and impaling Linnea Quigley on a pair of antlers.

The movie gets less creepy and more ridiculous as it goes along. My favorite scene is when young Billy, forced by mother superior to sit on Santa’s lap, punches St. Nick out. Santa goes flying out of his chair along with the classic sound effect used when Poncharella or Hunter or somebody punches somebody out. Then Santa gets up, blood all over his fake beard, and yells “What the hell is wrong with that kid?”

Some day I hope they will put these movies on DVD and do a double feature of parts 1 and 2. This would be redundant because most of part 1 is actually included in the body of part 2. The story follows Billy’s younger brother Ricky as he talks to a shrink about the events of part 1. The first 40 minutes is all scenes from part 1 with narration.

Unfortunately they leave out the punching-out-Santa scene, otherwise I’d recommend just skipping straight to part 2. The only advantage to watching them both is being able to spot weird continuity changes. For example: near the end of part 1 the police try to gun down the killer Santa in front of the orphanage, but they find that they killed the wrong Santa – it was Father O’Brien, dressing up as Santa to bring gifts to the children. 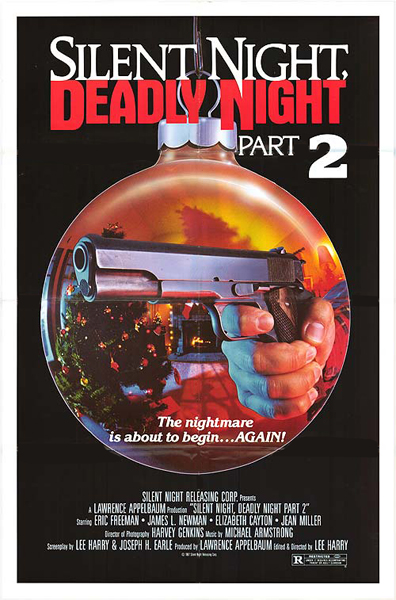 In part 2 they replay this same scene of the police shooting the Santa that they think is Billy. Then Ricky says “Just one problem… it wasn’t Billy. It was old man Kelsey, the janitor.”

[Note from the futuristic year of 2019: I am pulling a Walt Disney Company and censoring this review a little because I’m ashamed I was still using the r-word 17 years ago and I want people to be able to read my dumb writings on these important films. Apologies.]

It is the movie equivalent of one of those cheating episodes of tv shows where they just show a bunch of clips from previous episodes. It’s lazy and it doesn’t make sense because Ricky was only there for a couple of the scenes he flashes back to, and in one of them he was a baby.

When Ricky finally strangles the shrink and goes on an overacting rampage, he actually goes into a movie theater and watches Silent Night Deadly Night Part 1 – including a scene he already flashed back to as the traumatizing event that drove him insane before he could even pee in a toilet. This may sound postmodern or Fellini-esque or something the way I describe it but that’s just because I’m a great Writer. In the movie, it’s just stupid.

In one scene Ricky sees a woman being felt up against her will, so he runs the date-rapist over with a truck and kills him. And the girl thanks him.

His luck with women doesn’t continue, though. He really upsets his girlfriend when he hooks a car battery up to her ex-boyfriend’s tongue and makes his eyes explode. In the orphanage they never taught him how to work through differences in a mature relationship. So he just strangles her with a car antenna.

The guy who plays Ricky gives one of the worst acting performances I’ve ever seen. Usually, I like bad acting. I mean who cares. Good acting is overrated. “Look at me, I’m naturalistic.” Whoopty doo. But this guy, trying to look crazy, is an embarrassment.

I highly recommend this piece of idiotic garbage. I will probaly be watching the rest of the series, especially the one directed by Monte Hellman.

Christmas Christmas horror killer Santa Linnea Quigley slashers
This entry was posted on Tuesday, January 1st, 2002 at 6:33 am and is filed under Horror, Reviews. You can follow any responses to this entry through the RSS 2.0 feed. You can skip to the end and leave a response. Pinging is currently not allowed.