Man, it’s so sad to think about all these artists who get real good and then die in their twenties. How interesting would it be to hear old Jimi Hendrix recount the recording of Electric Ladyland, to see James Dean playing a father, or a grandfather, or Heath Ledger playing a character like Ennis at the end of BROKEBACK MOUNTAIN, but without aging makeup? That guy would’ve grown up to be rugged, but he didn’t have enough time. There’s such a long list of these guys who died after a period of fierce innovation, or seemingly on the verge of greatness. 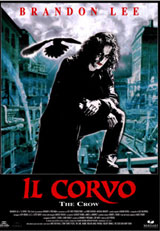 With Brandon Lee it’s even sadder because he was more like on the verge of on the verge. After LASER MISSION, RAPID FIRE and SHOWDOWN IN LITTLE TOKYO it was clear he wasn’t just getting a pass for being the son of the biggest martial arts star ever. He was a fighter in his own right, training in his father’s style, but differentiating himself by being more of an actor than his father. THE CROW was his breakthrough to a bigger audience – and might’ve still been if he hadn’t died. He did some action like usual (fighting, stunts, guns, swords) but a more challenging character than he’d had before. He played a crazed, sad ghost out for revenge, terrorizing his victims with snippets of poetry. He’s got this intense look in his eyes like he’s so proud of what he’s telling you and doesn’t realize you got no clue what the hell he’s blabbering about. It would’ve been great to see what kind of roles Lee could’ve gotten after that, but of course an accident with a prop gun killed him while shooting his character’s death scene. So now his legend is based on morbid irony and conjecture instead of a body of work. Not fair.

I was thinking of this movie because of the director, Alex Proyas. I thought this was pretty good when I first saw it, and DARK CITY really good. Since then Proyas has made due with “hey, not as bad as I was expecting!” movies like I, ROBOT and KNOWING. So we’ll see where he goes from here. But first I wanted to go back to the beginning to see if he was really any good in the first place.

THE CROW is a movie of its time, the 1994 version of DEATH WISH. You get the same kind of overacting rapist creeps as in a DEATH WISH movie, but with some bonus arson and witchcraft. Instead of inhabiting a decaying city it’s an exaggerated goth model (this was the post Tim Burton’s BATMAN era, when production design was king). Instead of being based on a trasy novel it’s an “underground” comic book. Instead of an atmospheric, jazzy score by Herbie Hancock it’s a collection of songs by The Cure and various goth and/or industrial (or something) style rock n rollers. Instead of an architect he’s a guitarist in an up and coming rock band. (Surprised they didn’t say “grunge.”) Instead of quoting westerns he quotes Edgar Alan Poe. Instead of becoming a vigilante to stop crime from ruining other people’s lives he becomes a ghost who kills the people who killed him and his fiance “to set things right.”

Holy shit, I just realized THE CROW is why kids today wear eyeliner and skinny pants instead of trying to be Charles Bronson. They were just given the wrong version of DEATH WISH, that’s all it was. The next generation will probaly be more like Kevin Bacon in DEATH SENTENCE.

Anyway, as bad as the bad guys are, as much as they deserve it, it still comes off as a pretty sadistic fantasy. He has magic powers. They shoot him and nothing happens, he just makes fun of them for trying. They’re fish in a barrel. He torments them like a kid picking on animals. It’s not until the end that the movie introduces the idea that he could lose his invincibility, so there’s not much tension about him pulling it off or not, it’s just “ha ha, take that, bad guy.”

In DEATH WISH he’s got cops after him, so there’s suspense. And it forces you to be uncomfortable with his morality (in part 1 at least) because he’s sneaking out and making up alibis, it’s like he’s a serial killer. He is a serial killer.

THE CROW has a little of that because Lee plays him pretty psychotic. You definitely see echoes of his performance in Ledger’s Joker. Think of the scene where Lee confronts Jon Polito as a sleazy pawn shop owner who bought the dead fiancee’s engagement ring. Lee tosses away wedding ring after wedding ring from a box, saying each one is a life that this guy helped destroy. He loads them into a shotgun and fires it, igniting a trail of gasoline. That’s pretty cool. And that’s kind of what’s weird here. I’m not sure this character is supposed to be so questionable. I can’t shake the feeling that he’s supposed to be awesome to the people who think evil clown makeup is cool. (To be fair, this is evil mime makeup.)

Don’t take this the wrong way, I’m not trying to connect any dots here, but watching it now made me think of Columbine. I mean, I bet those kids dug this movie – emotional rock ‘n roll guy takes sadistic glee in plowing through people he believes wronged him, are not as good as him, are lower life forms. I don’t know man, I usually like a good revenge story, but I guess you gotta get the mechanics right. I didn’t think this one was very good anymore.

But there’s plenty to admire about it. Michael Wincott and Tony Todd are the top bad guys, and they’re always enjoyable to watch. The dark, foggy city has a very strong look (more BLADE RUNNER than anything else). Lee does get some really good scenes, like the one where he comes right into the criminal meeting (later echoed in THE DARK KNIGHT and PUNISHER WAR ZONE, which uses sadism more humorously) or when he saves an addict by causing the morphine to drip out of her trackmarks. And I like the minimalistic explanation of the supernatural parts, which basically comes down to “people used to believe” a crow could transfer a soul or whatever.

Also you gotta hand it to THE CROW for being influential, for good or bad. Kids watching it now probaly don’t know that at the time there weren’t really movies like that. It has  a consistent tone too. Maybe it’s a corny tone, but at least they got the balls to stick with it, no joking around. Hell, I even liked Ernie Hudson in this movie. I don’t like this too much anymore, but it’s miles ahead of that later ’90s comic book movie I just reviewed, SPAWN. Although I must point out that it also has a streetwise kid sidekick (this one a tomboy on a skateboard).

Sorry, Brandon Lee. You gave it your all on this one. Wish you had more chances. I promise I’ll watch RAPID FIRE again.

Alex Proyas Brandon Lee Michael Wincott Tony Todd
This entry was posted on Friday, July 17th, 2009 at 2:27 am and is filed under Comic strips/Super heroes, Reviews. You can follow any responses to this entry through the RSS 2.0 feed. You can skip to the end and leave a response. Pinging is currently not allowed.