The wraparound story takes place in Simms Funeral Parlor, where three young drug dealers meet with the crazy-eyed, puffy-haired, organ-playing weirdo (Clarence Williams III, PURPLE RAIN) who runs the place. He claims to have found a bunch of drugs in an alley, but before they can make a transaction he starts opening up coffins and telling them the stories of the occupants’ deaths. As you do.

The first story deals with a topic that was from the headlines then and before and now. It starts with a black man pulled over by a group of white cops who insult, threaten, and then beat him. In this story, though, it’s a broader criminal conspiracy than usual: these cops are dealing heroin, and their victim Martin Moorhouse (Tom Wright, Charles from MARKED FOR DEATH) is a deliberately targeted councilman trying to keep them out of his community. They drug him and kill him and plant drugs on him. Like HARD TO KILL except he’s a regular amount of difficulty to kill so they succeed. 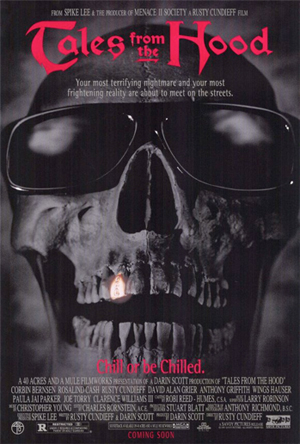 But he still comes back for revenge! The protagonist is Clarence (Anthony Griffith, PANTHER, CHARLIE’S ANGELS: FULL THROTTLE) the rookie who was the only black cop on the scene, subsequently quit the force and has been figuratively haunted by guilt and literally haunted by the ghost of Moorehouse. He lures the three cops who did it – Wings Hauser (VICE SQUAD, THE CARPENTER), Michael Massee (THE CROW, CATWOMAN) and Duane Whitaker (LEATHERFACE, PULP FICTION) – to his grave on the anniversary and maybe nothing would’ve happened except that one of them is crazy fuckin Hauser, so he decides he’s gonna piss on the grave and force his reluctant comrades in corruption to do the same. And you know how piss magic works, you’ve seen it in everything from the dog that resurrects Freddy in A NIGHTMARE ON ELM STREET 4 to Jason Bateman and Ryan Reynolds switching bodies in THE CHANGE-UP. Anyway, a zombie or ghost hand grabs one cop by the dick and bonks his head a couple times against the grave, and you can imagine where it would go from there. 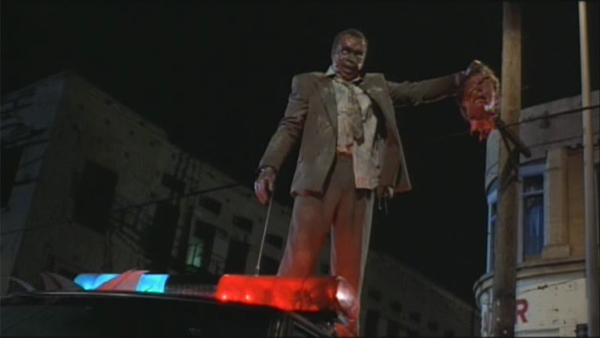 This is a good story showing both the strengths and the weaknesses of this type of format. You have a nice comeuppance-fueled short story with themes specifically relevant to African Americans. And it shames not only the evil cops but also the nice one who failed to intervene. But because they’re painting with such a broad brush they end up taking the police corruption to super villain levels, which makes the satire less accurate.

The second story sticks it to abusers. Cundieff himself plays Mr. Garvy, a nice private school teacher who notices bruises on his new student Walter (Brandon Hammond, 5 year old Caine in MENACE II SOCIETY, 10 year old Michael Jordan in SPACE JAM), who claims they came from a monster. Obviously Mr. Garvy suspects this kid is being beaten by someone in his family. Both are correct: his asshole stepfather (David Alan Grier, 3 STRIKES) literally turns into a monster at night and attacks him. Walter’s way of defeating him (drawing a picture and crumpling it) is cool, but not very well explained, since he also uses it on a non-monster, and it’s never established why he can do this magic. But it’s worth it for the cool death sequence 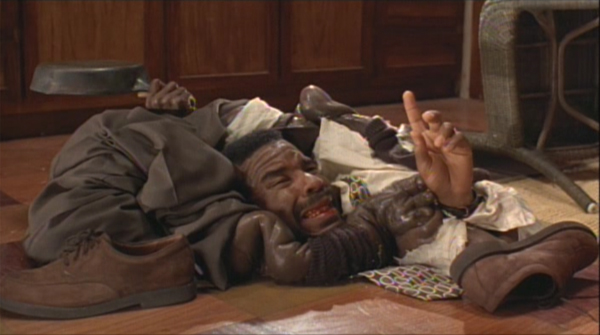 My favorite story is the third one, about Duke Metger (Corbin Bernsen, RADIOLAND MURDERS), an ex-Klansman running for governor of (I believe) Louisiana, as David Duke had done a few years earlier. Metger runs on a platform of complaining about affirmative action and welfare, he calls black protesters a “minstrel show” and he runs his campaign out of a former plantation where the owner infamously massacred his slaves when they were freed. People want him out of there, but he likes it for its “certain Southern charm.” One thing he probly would’ve wanted to know about: inside the mansion there are some antique dolls that are possessed by the souls of the murdered slaves according to local-man-who-tries-to-warn-them Art Evans (TRESPASS, DIE HARD 2).

Before long, the little guys are showing up in weird places and even moving themselves in cool PUPPET MASTER style stop motion sequences done by KILLER KLOWNS FROM OUTER SPACE creators the Chiodo Brothers. “No reparations!” the councilman yells as he throws a vase at a killer doll that looks like that Li’l Penny guy that Chris Rock used to voice in the Nike commercials.

But the dolls aren’t only after the white supremacist. They’re just as angry at Roger Smith (DO THE RIGHT THING, MERCENARY FOR JUSTICE), who didn’t go by Guenveur Smith yet but already specialized in playing slimy sellouts. He’s obviously a little reluctant about it but he does his best to advise the councilman on how to be palatable to voters. He’s joking around about it when he gets tripped and falls backwards down some stairs.

I love that they got a killer doll story in here, because it’s a good tribute to TRILOGY OF TERROR and maybe BLACK DEVIL DOLL FROM HELL, but it fits the movie perfectly regardless of what it references. There’s a weird history of slavery related knick knacks that you run into in antique stores and stuff. I like seeing them used as an instrument of revenge against bigotry. 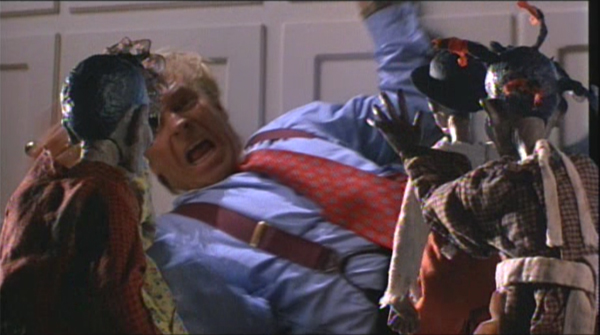 There is a fourth story too, and it’s more like what you expect from a 1995 movie with “HOOD” in the title. It’s about some young street guys and retaliatory shootings. But one guy named Crazy K (Lamont Bentley, Tupac in 2 LEGIT: THE MC HAMMER STORY) ends up in jail and then transferred to a weird hospital jail with a set out of an old Roger Corman movie and a staff who wear sexy latex skirts (I never figured out why). He takes part in a CLOCKWORK ORANGE type experiment where a doctor (Rosalind Cash from OMEGA MAN, who died that Halloween) intersperse his memories of his own black-on-black crime with historical footage of lynchings and cross burnings and stuff. Then he’s confronted by all of the people he caused the deaths of. He tries to blame his parents and the system but his excuses are not a cutting it in a very effective emotional confrontation scene.

I actually think one part was going a little far: the little girl who says he killed her with a stray bullet. I know this is a real tragedy that happens, but I think it’s another example of making the message weaker by overreaching. He should feel guilty enough for the people he attacked intentionally, the extra layer of squandered cuteness is not necessary. So it allows you to think you’re not who it’s talking to if you haven’t accidentally killed a kid yet.

It’s pretty easy to guess how this story is gonna tie in with the wraparound, but it’s still pretty cool. The three drug dealers, Stack, Ball and Bulldog, are played by Joe Torry, De’aundre Bonds and Samuel Monroe Jr. I really like seeing Bonds, a charismatic kid who was great in GET ON THE BUS but missed out on a decade of his career because of a prison stint (he recently played the school security guard in DOPE).

I don’t think it’s giving anything away to confirm that eventually Williams turns into a monster. The sequence is notable for slipping an animated forked tongue through his famous tooth gap. 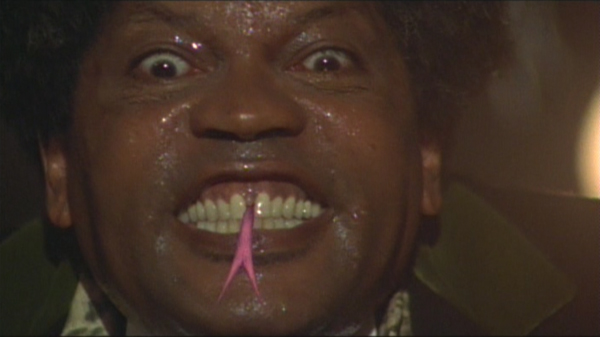 Cundieff has mostly worked in broad comedy, but his sophomore movie here is overall serious. He wrote the script with Darin Scott, who not only produced FEAR OF A BLACK HAT and MENACE II SOCIETY, but STEPFATHER II. Scott also wrote FROM A WHISPER TO A SCREAM and directed HOUSE PARTY: TONIGHT’S THE NIGHT.

TALES is a little better looking than Cundieff’s other movies. Cinematographer Anthony B. Richmond also did CANDYMAN, which shares the themes of supernatural horror in the ghetto, avenging ghosts of slaves and creepy murals depicting said ghosts.

The effects artist Screaming Mad George (BIG TROUBLE IN LITTLE CHINA, NIGHTMARE ON ELM STREET 3 and 4) did the devil at the end and the crumpled David Alan Grier. I guess maybe we credit visual effects supervisor Brian Jennings (MIMIC) for my favorite effect, the incredible melting crooked cop: 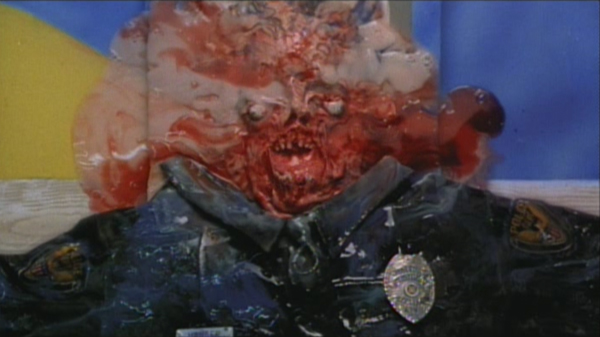 Christopher Young gives it a very haunting theme kind of in the style of his HELLRAISER, but later we hear Nina Simone’s haunting “Strange Fruit” and a bunch of solid gangsta rap songs that now that I think about it might’ve influence the horrorcore style of Snoop Dogg’s BONES soundtrack. They got Wu-Tang, Facemob featuring Scarface, ODB, Gravediggaz. I don’t know why I never got this album. I should get it.

TALES FROM THE HOOD seems to have made a little bit of money relative to its low budget, and the soundtrack went gold. There are at least two black horror anthologies that have come out since – SNOOP DOGG’S HOOD OF HORROR and NITE TALES: THE MOVIE (hosted by Flavor Flav) – but apparently Universal is not interested in Cundieff doing a sequel. Maybe there will be more interest when this comes out on Blu-Ray from Scream Factory in 2017.

19 Responses to “Tales From the Hood”