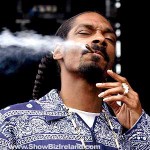 You guys had a test screening review of HOOD OF HORROR a long time ago. Since then I guess it played that “AFTER DARK HORROR FEST” thing which I’m sure most of you also boycotted due to 1. lack of interest 2. not wanting to validate all those web advertisements with the annoying screaming sounds. I read somewhere this one was going to get an actual, legitimate more than 2-days type theatrical release, and I can’t find a release date for the DVD anywhere. So I guess we gotta assume the DVD screener I watched was for Academy Award consideration. Good luck Snoop, I’m rooting for you. 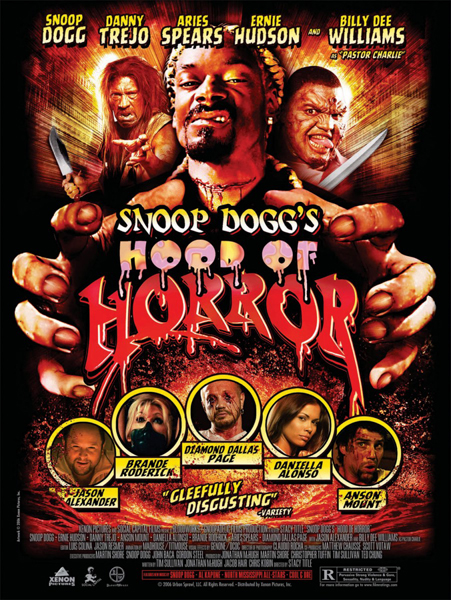 The crudely animated opening tells the story of Devon (played by a sequential series of drawings of Snoop), a gangster who accidentally kills his little sister in a drive-by shooting. To set things straight he makes a deal with a demon and/or devil. In exchange for his sister coming back to life, he will host a horror anthology. Also he does the theme song, not sure if that was part of the deal or just something he did because he believed in the project.

So now Devon is in live action, he gets a pair of gold braids and a throne in Hell which, it turns out, looks like a small warehouse where you would shoot a low budget rap video. His curse is to hang out with the damned and tell them moralistic horror stories until they’re redeemed. Like most anthologies these stories are a mixed bag, but nabbing Snoop as the host and giving him this backstory was a stroke of the ol’ genius. The guy is so charismatic strutting toward the camera flanked by his demonic hoes and his midget sidekick Half Pint, asking us, “Y’all ready for some crazy shit?” And just in the first 5 or 10 minutes of the movie we get a pretty good selection of crazy shit: animated Snoop calling a demon the n-word, Half Pint puking a bunch of blood on the floor, Devon promising his “legless homey Footloose” a shoe endorsement deal. The movie doesn’t live up to this great opening, but it’s able to coast on it for a while, so I had fun.

The first story really stays dedicated to the frequent delivery of crazy shit. A female graffiti artist is kidnapped by Danny Trejo, dragged to some kind of candle-lit occult lair, tied up and forcibly tattooed using a crow feather. She has a positive attitude about the whole experience though because when it’s all done she looks at her new skeleton hand tattoo and says, “Damn, that’s tight.”

Little does she realize that she now possesses deadly graffiti powers. When she crosses out someone’s tag with her curdled-blood-like red spraypaint, that person will die in some horrible accident. For example, a guy’s belt buckle is stuck when he’s trying to sexually assault somebody, and while trying to pry it open he bumps the gun tucked in his waistband and shoots his own dick off. Later, one of his friends is pouring one on the curb for him, slips in the puddle he creates and impales his head on the 40 oz. bottle, creating a spectacular geyser of blood and malt liquor. (Don’t worry, they give the victims each different ethnic backgrounds so it won’t seem racist.) This is good stuff, this is exactly what I want to see when I visit a Hood of Horror.

But, the other two stories are slower and not as funny. The second has a cartoonishly over-the-top (and not in a good way) Texan couple inheriting a building inhabited by his late father’s Vietnam platoon. Ernie Hudson (THE SUBSTITUTE) gives an admirably serious performance as one of the vets trying to stop the slumlord from screwing over his sick war buddies. But the story only really gets fun at the end when it stops making sense and just creates ridiculous deaths, like when they somehow cause BAYWATCH’s Brande Roderick to explode using a vacuum full of caviar (?).

Then the third story is an overly serious IT’S A WONDERFUL LIFE type deal where a famous rapper has to watch clips from his life and find out what he did wrong. Like most movies with actors playing famous rappers (think SNAKES ON A PLANE) you immediately see that this guy doesn’t have the presence or charisma to really be a famous rapper. And the tensions between him and his partner don’t have time to develop believably. Jason Alexander has a cameo doing a terrible British accent, and he doesn’t even get to die in the movie.

This story was a bust, but I did kind of like the idea that this rapper got his career by praying to God, and now God is pissed at what he’s done with that career. You never see God, but a zombie delivers the message that He wants rappers to stop thanking Him at awards shows.

In alot of anthologies the connective tissue is the worst part, but in this one you’re always happy when Snoop is on screen. He not only introduces the stories but shows up in them for little cameos. In the rapper story he’s on the red carpet at an awards show interviewing Method Man. I’m not surprised Hell sends people to do red carpet interviews, that just makes sense. In the slumlord story we find out that Devon and Half Pint are the elevator operators that bring dead people to Hell. And there’s an awesome shot where a glowing-eyed Devon shoots a chihuahua, causing it to explode.

Devon is not a catchy enough name, but in my opinion this guy has what it takes to be a great horror host. I don’t want to insult the Cryptkeeper, who has put in many fine years of brave and honorable service. But facts are facts, and Devon is a much cooler host. He has a smooth voice instead of whiny, he is restrained in his use of puns (though not rhymes), he is exquisitely tailored and he looks cool towering lankily over his hellish posse. I bet the Cryptkeeper is pretty fuckin jealous, especially when he sees the trailer calling Snoop a “Cribkeeper.” I mean how is a little decomposing shrimp like him gonna compete with that? Well, in Cryptkeeper’s defense, it’s cool that he’s decomposing. Snoop needs that digital eye glow to look like a monster.

HOOD OF HORROR was created by Tim Sullivan, whose 2001 MANIACS I didn’t like so much. I wondered if he knew this “hood horror anthology” concept had already been done in Rusty Cundieff’s TALES FROM THE HOOD. Then I read that he actually made the movie because he loved TALES and thought there should’ve been sequels. From what I remember, TALES was a little more successful storywise, but you gotta give credit to Sullivan for the idea of tying these type of stories to a demonic Snoop Dogg. In retrospect, that is obviously what TALES was missing.

The director is Stacy Title, the woman who directed THE LAST SUPPER. If you don’t know that one it’s a pretty decent 1995 independent comedy about a group of misguided liberals who invite people to dinner and then poison them and bury them in the garden if they turn out to be assholes. (They like composting.) Her new movie uses a few too many flashes and avid farts, but the direction is pretty competent, and the photography has a distinctive (if cheap) look to it. I’m glad they didn’t just get some shitty music video director who’s not ready to make movies, which is what I would expect for a movie put out by Xenon Pictures. Don’t get me wrong, I am thankful to them for putting out the 7-disc Dolemite box set (“Officially Disapproved by The Man”), but when they’re putting out new movies they’re not a name I trust.

SNOOP DOGG’S HOOD OF HORROR is no masterpiece. And I’m not saying that in a “ha ha, this is only a silly horror movie, it’s not supposed to win any Oscars so you can’t hold it to any standards at all” type of way. I’m saying that a movie called SNOOP DOGG’S HOOD OF HORROR really ought to be a masterpiece, and in this case is not. But I enjoyed watching them give it a shot. If this type if thing sounds good to you, it’s worth renting. If it doesn’t sound good to you, well, I’m a tolerant guy, I will forgive you for being such a bum out. But come on, people.

And since the concept is good I’m really hoping this will become a series.

Of course, I wanted that to happen with BONES too, but this one has a chance because it was much cheaper to make and easier to sequelize. This time let’s have more of the humorous gore, more of Devon, more of the crazy shit. Yes Snoop, we’re ready for some crazy shit.

anthologies Billy Dee Williams Brande Roderick Danny Trejo Diamond Dallas Page Ernie Hudson Jason Alexander Snoop Dogg
This entry was posted on Wednesday, January 17th, 2007 at 4:41 am and is filed under AICN, Comedy/Laffs, Horror, Reviews. You can follow any responses to this entry through the RSS 2.0 feed. You can skip to the end and leave a response. Pinging is currently not allowed.