JUICE is an early ’90s “hood movie” about four young friends in New York who fall into some stupid shit. Tired of getting picked on by the Puerto Rican kids and the cops and not having money, they decide to get a gun (just one between them) and rob a little mini-mart where the guy is an asshole and yells at them sometimes. It’s not exactly The Thomas Crown Affair they’re trying to pull off, but they’re amateurs so they fuck up this small time crime and have to deal with the aftermath.

We see all this through the eyes of Q (18-year-old Omar Epps in his first movie), basically a good kid and also a very talented DJ, just now getting some traction since he decided to enter a big DJ contest. His friends don’t even really support him in following that dream, but he does it anyway. 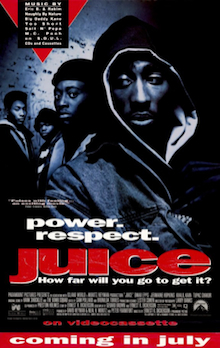 So you might think he should just say fuck those guys, but he has a loyalty to them and he feels the same frustrations they do, so in an act of stupidity he goes with them to do this robbery. Shoulda just stayed and hung out with Doctor Dre and Ed Lover at the contest, in my opinion. And Fab 5 Freddy was there too! Why would you just leave? There’s a great moment when Q is up behind the turntables in front of the crowd, in a post-triumph glow, and he looks out and sees his friends. They’re not even smiling for him because they’re there to pick him up for the robbery. That should’ve been the tip-off, though. These guys don’t even give a shit that you beat a bunch of legendary DJs your first time out. Fuck those guys.

Raheem (Khalil Kain) is complicated like Q is. He seems kind of like the big brother and the peacemaker. When Q and this other guy Bishop (played by 19-year-old Tupac Shakur in his first role other than the Digital Underground cameo in NOTHING BUT TROUBLE) keep sniping at each other it’s Raheem that tells them they have to “squash this” and forces them to talk it out. But he’s not exactly the conscience of the group either, because he really wants to do this robbery.

Bishop is the Mr. Blonde in their crew. He’s kind of a suspense-thriller encapsulation of Tupac’s later public persona: charismatic, funny, macho, crazy, dangerous. At first it seems like he’s just reckless and getting out of control, then you start to realize that no, he’s a straight up psychopath. The creepiest moment in the movie is when he goes to the family get-together after the funeral of the friend he shot to death. Q knows Bishop did it but the family doesn’t, so Bishop acts like a sweetheart, offering support and hugs to the mom and the sister while having a threatening staredown with Q over their shoulders.

Before that you can laugh at him a little bit. His loud enthusiasm for the Jimmy Cagney movie WHITE HEAT is pretty great. You’d expect him to be that into SCARFACE or something, but not an old film noir.

There are a few little things that mess with the otherwise gritty and down-to-earth feel of the movie. Samuel L. Jackson’s character seems to have a supernatural ability to know everything (there’s a joke about him already having heard on the streets that Q got into the DJ contest right as he walks out of the audition). There’s a really far-fetched scene where Raheem happens to walk into a restaurant and run into an old friend, who it turns out is about to rob the place and offers to let him join in. He politely declines and is able to just leave peacefully, only finding out later on the news that his friend got killed.

And there are some jokey little cameos, like EPMD are in the background of that restaurant  scene right after the kids shoplift a 12″ of their song “Rampage” featuring LL Cool J. Better yet there’s a scene where Jackson is talking to a buddy, and I didn’t realize it at first but the buddy is Oran “Juice” Jones. I knew he looked familiar, I think I must’ve seen him spying on me one time when I was walking in the rain with his girl. Anyway, you get it? His nickname is Juice. The movie is called JUICE. It’s hard to explain.

On the other hand I have to admit that one of the weird, less believable moments is one of my favorites. Q goes to a place where he’s heard he can get a gun. It’s not what you’d expect, it’s like a little diner club for older people, he doesn’t fit in it all. There’s a lady named Sweets (Jacqui Dickerson – maybe the director’s mom?) in charge, and she gives him the weapon because she recognizes him from when he was younger. “Tell your Mother Jacqui said hi,” she tells him.

I guess you don’t really hear about JUICE too much anymore. Probly even less so in Europe, since it was released there as ANGEL TOWN II, a sequel to an Oliver Gruner movie. But it turns out it holds up well, and it’s also interesting as an important piece in the puzzle of ’90s pop culture. It came out in January ’92 – less than a year after NEW JACK CITY, BOYZ N THE HOOD and STRAIGHT OUT OF BROOKLYN, about a year and a half before MENACE II SOCIETY. Shakur wasn’t a superstar yet. He only had the mildly successful 2Pacalypse Now album under his belt, and was still just a spin-off from Digital Underground. I know some people in documentaries have said he got too into the role of Bishop and that’s what turned him from thoughtful political guy to “thug life” dude going around getting in arguments where everybody pulls guns out. I don’t know, but he’s really good in the movie. If you don’t understand his popularity from listening to his music, watching this movie might help. It’s not a “hey, I recognize this famous rapper” performance, it’s a “whoah, this guy should switch to acting” one.

The director is Ernest Dickerson, who started as a cinematographer on Spike Lee’s student film JOE’S BED-STUY BARBERSHOP: WE CUT HEADS. Then he did a couple movies like THE BROTHER FROM ANOTHER PLANET and KRUSH GROOVE and 8 episodes of Tales From the Crypt before doing Lee’s first six movies, from SHE’S GOTTA HAVE IT through MALCOLM X. With JUICE he switched over to director, but it later turned out he wasn’t gonna be the auteur type like Spike. If you ask me his first three were solid entertainment. JUICE was followed by SURVIVING THE GAME and TALES FROM THE CRYPT: DEMON KNIGHT. Then some other stuff, then the Snoop Dogg horror vehicle BONES was kinda funny. Since ’04 he’s been where all the journeymen directors go, TVland, directing shows including but not limited to Third Watch, Criminal Minds, CSI Miami, Heroes, 6 episodes of The Wire, Burn Notice, SGU Stargate Universe, Treme, The Walking Dead and Dexter. You know, Ernest Dickerson type shows.

But JUICE was good.

It’s a good time capsule too. They listen to their music on cassette tape. They shoplift from a record store – new releases on vinyl – that also rents movies on VHS. There’s an ABOVE THE LAW poster on the wall, and I mean the Steven Seagal movie, not the West Coast rap group. Q has a huge Malcolm X poster behind his turntables (the guy, not the movie) because young people didn’t have phones back then so they cared about stuff like that.

Queen Latifah plays the lady who runs the DJ contest, and this was when she was a current rapper. She still wore a big hat and everything.

Steel (Jermaine Hopkins) has an appreciation for older artists, though. In the record store scene he wants to steal the album Starbooty by Roy Ayers’ group Ubiquity, but nobody else is into it. I guess they’re kinda right, Starbooty is pretty disco. He coulda found something better.

The score is credited to Hank Shocklee and The Bomb Squad – that means the producers of Public Enemy’s early albums and Ice Cube’s Amerikkka’s Most Wanted, basically the greatest hip hop producers of all time if you ask me. The score is no It Takes a Nation of Millions To Hold Us Back, but it’s got some good beats for chase scenes and shit. Shocklee also helped out with some of the songs on the soundtrack. There are some good ones by Eric B and Rakim, Cypress Hill, EPMD, Big Daddy Kane, and that guy “Son of Bazerk” that the Bomb Squad produced that never caught on much.

Please enjoy the excellent theme song, “Juice (Know the Ledge)” by Eric B and Rakim.

And for tangentally-related extra credit here’s Ghostface Killah from his “More Fish” album, having the balls to do his own song over an entire instrumental from one of the greatest rappers of all time… and in my opinion actually pulling it off.

Doctor Dre Ed Lover Ernest Dickerson Fab 5 Freddy Hank Shocklee hip hop Omar Epps Queen Latifah Samuel L. Jackson Tupac Shakur
This entry was posted on Tuesday, November 29th, 2011 at 2:33 pm and is filed under Crime, Drama, Reviews. You can follow any responses to this entry through the RSS 2.0 feed. You can skip to the end and leave a response. Pinging is currently not allowed.