First off I would like to offer up my sincerest apologies, condolences and what not for the tarditude of this particular column, which is one day late (it usually comes out early Monday, thanks for paying attention motherfucker). But I think when you find out what I have been cookin up for you you will understand why it was necessary and WELL fucking worth the wait.

You see we here at Vern Tell’s It Like It Is, and by that I mean me, have been working very hard to bring to you an exclusive, a review of a movie that almost none of the other film Writers have been able to cover. It took a lot of work to find this movie and I hope you will give a motherfucker credit for going out of his way for the art of Cinema. What you are about to read about is a small independent picture which deals with issues that are very important to me. It is a picture called Three Strikes.

What this is is a low budget “hood” comedy starring Brian Hooks and a bunch of other motherfuckers you never seen or heard of before. It is written plus directed by a dude called D.J. Pooh which, good god I feel sorry for a man with a name like that, imagine what the kids said about him when he was growing up. You don’t even have to come up with something that rhymes with “pooh,” the joke is already written.

Now the reason this movie has not been covered before today has to do with a little thing called “critics are a bunch of fucking pussies.” As you probaly know, critics have an arrangement with the publicists so that they can get passes to see movies for free before they come out. This is convenient because they can publish the review the day the movie comes out, and they don’t have to waste their piddly salary seeing Runaway Bride and what not. 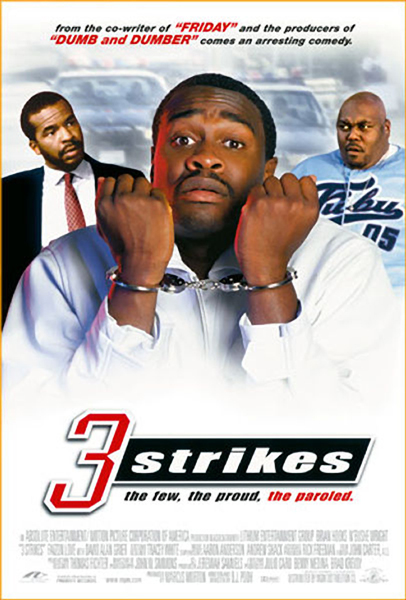 But the problem is every once in a while a studio doesn’t have faith in a movie and doesn’t bother with a critic’s screening. This is the kiss of critical death. Entertainment columnists and newsgroup twits will snidely say, “critic’s screenings were not allowed, which is never a good sign.” The critics decide before they’ve seen it that it’s going to be garbage, and they get bitter because – holy fucking christ – they have to go see it on opening day with the unwashed masses and the Real Motherfuckers. This pisses them off and I dare you to find a case where they wrote admitted a movie was good anyway.

This is the difference between a film critic and a film Writer. A film Writer such as myself has to see a movie with real motherfuckers anyway. That’s what Cinema is about, jack.

A real good example of how this leads to bias is in the Seattle Times review of Three Strikes, written by a known film critic, John Hartl. He started his review complaining about how there was no critic’s screening, and he had to see it with a rowdy audience, he couldn’t hear any of the dialogue and he left after 45 minutes.

And then he proceeded to tear into the motherfucker as if he had any idea whether it was good or not. This is what the film critic does, because the film critic is not a Writer, but a pussy.

For more information on pussies check out The Online Film Critics Society.

Well, of course critics aren’t gonna like Three Strikes. It’s a low budget, lowbrow movie with no name stars, all black cast, a rapping music soundtrack, released by MGM and directed by a guy with the last name poo. I mean jesus gimme a break. This could be the best low budget comedy ever it still wouldn’t get a good review. And just because the studio motherfuckers don’t have faith in it doesn’t mean it’s not gonna be good. I mean think about it. They work for a movie studio. They are the type of motherfuckers who release the type of movies that are released. I rest my case.

Well, okay, in this particular instance of Three Strikes they were right, it’s not a good movie. But hypodermically I’m just sayin, just because they have a “no free lunch for pussies” policy doesn’t mean you can write off the movie. You oughta give it extra credit.

The problem with Three Strikes in my opinion is that it almost has a great premise, but then it doesn’t. This guy Rob gets out of jail and he has two strikes. He has had bad luck with the law in the past, you find out that he got his second strike three days after he got back from the first one. Now he’s talkin about he wants to go straight because he’s not ending up in there again.

What a great point A, right? I mean the line to point B practically dots itself. You got this well meaning fuckup, he really doesn’t want to screw up again, but everywhere he goes he runs into cops and he has real bad luck and holy jesus, he’s gotta make sure he doesn’t get into any trouble. It’s something we can all relate to and at the same time it satirizes this fucked up idea of you steal a guy’s VCR you get locked up for life. Don’t bother to rehabilitate a motherfucker, just lock him away in the land of punks and jockers. I mean this is a movie we need right now, in my opinion. But Three Strikes is not it.

The beginning is funny. A few minutes after he gets out, Rob is rolling in a stolen car smoking a joint and saying, in all sincerity, that he’s gonna do whatever it takes to stay out of jail. That, in my opinion, is comedy. But then they get pulled over, there is a shootout with police, and the rest of the movie is about Rob trying not to get caught and prove that he didn’t shoot at the police. So much for the three strikes idea.

A part of the problem is that there is just too many characters. There are good people in the cast but none of them get enough to do. This guy D’Aundre Bonds is real likable at the beginning, but then he gets shot and spends the rest of the movie in the hospital with his ass in a sling. Because he got shot in the ass, when he got shot. So you see his ass, it’s in a sling. Literally, because that’s where he got shot, in the ass. I hope I explained that well enough.

N’Bushe Wright plays Rob’s girlfriend, I’ve seen her in a couple movies before and she’s a pretty good actress. Here she looks hotter than ever but her character is weak as hell. She just sits around waiting for Rob and you can’t figure out why. There are also a bunch of charismatic fat bald guys in the cast, and the funny veteran standup comedian George Wallace plays Rob’s dad. He’s funny insulting Rob at the beginning and then you don’t see him much until the end. And some guy who looks alot like Bernie Casey (from that old TV movie Gargoyles) plays Rob’s uncle, but all he does is fart and fart and fart, I mean more than even an Eddie Murphy character, this guy keeps farting. It’s like Mr. Poo is trying to overcompensate, like, “See guys, I’m in on the poo humor too, farting is funny, there is a lot of farting in my movie you see. Stop making fun of me god damn it!”

Then at the end Mr. Pooh brings in a big police chase and media blitz and lawyers and what not, which I think is violating the famous Writer rule of Write What You Know. I think if he would stick to writing movies about what it’s like to be a dude growing up in South Central LA with an embarassing last name then he would have some more success. Keep it simple poo, you’ll be all right. You got some funny ideas, just cut out some of the characters and all of the farts and you might have something. thanks bud.

prison
This entry was posted on Monday, March 13th, 2000 at 3:02 pm and is filed under Comedy/Laffs, Horror, Reviews, Vern Tells It Like It Is. You can follow any responses to this entry through the RSS 2.0 feed. You can skip to the end and leave a response. Pinging is currently not allowed.

One Response to “3 Strikes”