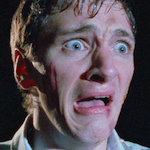 Hawkes is from Minnesota, but as a young man he moved to Austin, where he was in a couple bands (including one with Rodney “Joey from ELM STREET 3 & 4” Eastman) and started appearing in locally filmed movies like FUTURE-KILL (the one with the unrelated H.R. Giger cover), D.O.A., and a thriller called MURDER RAP where he’s the star. He’s also the lead in SCARY MOVIE, playing a fraidy cat nerd named Warren who goes with his more outgoing buddy Brad (Jason R. Waller, Austin Stories) and Brad’s girlfriend Shelley (THE BALLAD OF THE SAD CAFE) to a haunted house attraction. END_OF_DOCUMENT_TOKEN_TO_BE_REPLACED 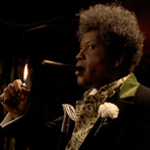 The wraparound story takes place in Simms Funeral Parlor, where three young drug dealers meet with the crazy-eyed, puffy-haired, organ-playing weirdo (Clarence Williams III, PURPLE RAIN) who runs the place. He claims to have found a bunch of drugs in an alley, but before they can make a transaction he starts opening up coffins and telling them the stories of the occupants’ deaths. As you do. END_OF_DOCUMENT_TOKEN_TO_BE_REPLACED 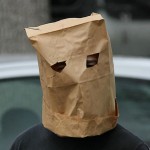 This week they got the prequel to the remake coming out. I’m sure I’ll probaly hate it, but who knows. In some ways it doesn’t sound as bad as the remake, and since it’s not a remake you can hold it to the lower standards of a sequel. And lucky for it, there have been two not so hot sequels already to lower the bar. So I came up with a plan. First, I devised a method by which I will see the prequel without Michael Bay getting any of my money. Then I rented parts 3 and 4 so I can have them fresh on my mind while watching the prequel. That way I will have the maximum possible open-mindedness when I see the new one and might be able to appreciate it. The only problem is I watched Part 3 here and it’s not as bad as I remembered. END_OF_DOCUMENT_TOKEN_TO_BE_REPLACED