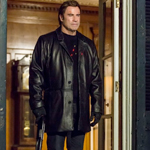 But 22 minutes in we get the JOHN WICK twist. Stanley smashes through a wall in his house and pulls out a suitcase full of guns, cash and passports – the ol’ emergency preparedness kit. Turns out he was a scary black ops dude who retired for his wife. No wife, no way to stop him from killing again.

He calls up his old partner Dennis (Christopher Meloni, Dinosaurs) at his barbershop. I’m not totally clear if that’s only a front for his mercenary activities or if it’s his actual job now and he’s just the kind of guy that has a gun range in the back of his shop. But I like that they discuss business (and unresolved tensions) while Dennis is giving Stanley a close shave. It couldn’t be a haircut, because Travolta’s got a distractingly fake piece on in this movie, but of course it’s fitting that he has to trust this guy enough to let him hold a knife to his jugular. 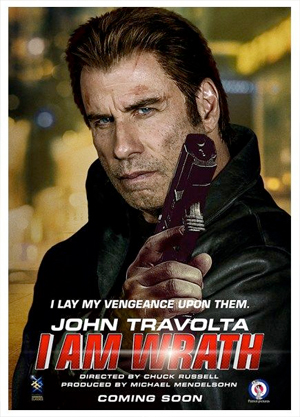 Stanley is only looking for help getting some intel, but Dennis insists on backing him up. Even when he’s told not to he keeps showing up and helping. “Oh, am I supposed to thank you now?” Stanley whines, and they bicker like an old married couple where neither of the spouses has been murdered by gangsters. But the loyalty shines through and Travolta and Meloni are both good enough that it almost works.

So it’s a two-old-guys-who-think-they’re-cool-enough-to-wear-leather-jackets-infiltrate-the-underworld-and-are-constantly-underestimated-by-younger-guys-who-have-no-idea-the-shit-they’ve-done type of movie. They’re chasing guys down, beating names out of them, going into strip clubs and tattoo parlors asking for people, busting off shots in the V.I.P. room while Dennis counts out how long before the police show up. They steal money from a drug shipment and use it as bait to catch the killer. When they’re supposed to meet up with him he’s eyeing some unrelated gangster’s own bag and almost gets himself into trouble for it. That would’ve been a funny coincidental turn of events, but Stanley comes in and ends up having to shoot at both of them.

There’s alot of confronting and chasing. Here’s a great bit: a criminal playing pool (Robert Forte Shannon III) for some reason decides to shoot a cueball down the bar to explode Stanley’s glass. I thought it was because he knew he was being followed, but when Stanley turns and the guy sees his face he’s like OH SHIT, IT’S HIM! and runs. So it does not work out for him, but still, I think we should all consider adding that shoot-a-cue-ball-at-a-stranger’s-drink move into our playbooks.

The action is mostly unremarkable, but old school clear. There’s a shot where a guy gets thrown and you can see what happens and see that it’s Travolta doing it. I’m not sure I could say the same about Damon in JASON BOURNE. Some of the gun play is pretty good.

Travolta’s pretty much doing the same things Seagal does in his movies now: he’s a big guy smashing people down quickly, breaking their wrists, swatting them away. He and Meloni handle the choreography (fight coordinators Don Thai Theerathada [POWER/RANGERS, BULLET TO THE HEAD] and Justin Yu [Agents of SHIELD], both from the JOHN WICK stunt team) pretty well for regular actors.

But it’s not enough. I don’t think there’s enough craftsmanship or flair to make the formula revenge story feel more than generic. You gotta have more skill or weirdness than this to justify the ten thousand four hundred and sixty fifth movie where a killer goes into an empty church and talks to a priest about his guilt. The one goofy part that gave me a chuckle is Stanley’s attempts to be cool when he’s snooping around. The best example is when he’s trying to track down the killer through a tattoo artist. He comes in near closing time and asks:

At no point do we see any previous ink on his body, but he’s trying to act like he goes into tattoo shops all the time, he knows the drill. He talks about tattoos so much that it would be a huge waste of time to pronounce both syllables and the only way to live a full life of enjoying tattoos is to abbreviate the word.

Well, don’t worry, he does in fact get his “tat,” a giant one across his shoulder blades. Can you guess what it says?

You’ve heard of titular lines, but how many movies have titular tattoos? I guess THE GIRL WITH THE DRAGON TATTOO. And actually this one has the titular line as well, he says it during the MARKED FOR DEATH style conclusion hunting down the (SPOILER) governor (Patrick St. Esprit, INDEPENDENCE DAY: RESURGENCE), because it turns out the killers weren’t just muggers, but killers hired as part of a government cover up. “Who are you?” “I am Wrath” might actually be kind of a cool crazy thing for him to say if it came out of nowhere because it wasn’t the title. It is, though.

Speaking of tattoos, his wife’s killer (Luis Da Silva Jr., also in KICKBOXER: VENGEANCE, TRIPLE 9, DEAD MAN DOWN, BAYTOWN OUTLAWS, DRAGON EYES, FAST FIVE) has a tattoo of a fly on his face. First of all, I gotta question why so many murderers in movies are willing to do it with easily identifiable tattoos visible. Bad move, murderers. But secondly, I believe it is even poorer judgment to get a fly tattooed on your face in the first place. Why did you think that looked cool? And these guys at the tattoo parlor (one is played by a guy who really worked there) seem pretty responsible, why would they not talk him out of it?

I also kinda got a kick out of how many times Stanley disguises himself by wearing a hoodie. Nothing against hoodies, they are a proud clothing tradition, but Travolta, with his particular age and look and style, looks weird and suspicious sitting around in bars with his hood up trying to eavesdrop.

I wasn’t quite able to parse the politics of this one. It starts with a montage of fake news clips of street crime, justified police shootings and heartless shootings of police. It kind of plays like a defiant rebuttal of the real news, where the seemingly unjustifiable shootings are what gets attention. (This portrait doesn’t match up with the reality of the movie either, since most of the cops seen in it are corrupt murderers.)

The anchors not only claim there’s a huge out of control crime wave, but also that the facts and statistics proving otherwise are lies. It’s an uncomfortably Trumpian fantasy that feels kinda gross to me even though it’s probly only meant as an excuse to hype up the audience to applaud fictional vigilantism like in the DEATH WISH days. The real police chase footage and accurate news broadcast graphics scream “torn from the headlines,” but if it was then those would be misleading, sensationalistic headlines.

But also we have this governor who works with the gangs and sets up a fake robbery-homicide to cover up that the pipeline he’s going to build is not environmentally sound as he claims. So there’s something that could ring true to Trumpheads and Berniephiles alike. Covering all the bases I guess.

There’s a DEATH SENTENCE turn where Stanley’s normal daughter and son are shot at in a mini-van in the suburbs and it’s obvious that it’s his fault and they are not having this shit. But it doesn’t feel like it’s very serious about showing the consequences of vengeance/vigilantism. It hints at a dark ending, when Stanley refuses to put his gun down, playing suicide-by-cop.

Except that he’s wearing a vest and they only shoot him in the vest. So what was he trying to do? Did he assume they would shoot him in the head? Did he just want to test out the vest? Maybe he needed them to hospitalize him in order to escape? I guess we’ll have to take that last one, though I feel like they should’ve explained that a little. Anyway, it’s setup for a decent gimmick where he gets to shoot attackers from a hospital bed.

The story is credited to Yvan Gauthier (editor of BLACK COBRA and Seagal’s upcoming THE PERFECT WEAPON), screenplay to Paul Sloan (VIGILANTE CHRONICLES, VIGILANTE DIARIES). The reason I wanted to see this is the director, Chuck Russell. He never became a household name, but this is the guy who wrote DREAMSCAPE and directed A NIGHTMARE ON ELM STREET 3: DREAM WARRIORS and the 1988 remake of THE BLOB. I’m less a fan of THE MASK and ERASER and I haven’t seen BLESS THE CHILD but I do like THE SCORPION KING quite a bit. That was actually his last movie, so there’s a 14 year drought there with just an episode of Fringe and a couple executive producer credits (one is on COLLATERAL, so maybe that’s one of the movies he developed to direct at one point?).

By the way, the cinematographer is also a name I remember from the ’90s: Andrzej Sekula, who shot RESERVOIR DOGS, PULP FICTION and AMERICAN PSYCHO. Also HACKERS. So there are some good people working on this.

It would be cool if Russell said fuck it, I’m gonna get back in the game with a totally kickass DTV movie. I wouldn’t say I was expecting that, but I was hoping for it. I don’t think he just tossed this one out, and he was happy enough with it to record a commentary track, but the circumstances did not come together for this to be a scrappy low budget comeback movie for him.

Oh well. Good to see him back.

Andrzej Sekula Christopher Meloni Chuck Russell John Travolta Luis Da Silva Jr. Paul Sloan Rebecca De Mornay
This entry was posted on Tuesday, September 6th, 2016 at 12:35 pm and is filed under Action, Reviews. You can follow any responses to this entry through the RSS 2.0 feed. You can skip to the end and leave a response. Pinging is currently not allowed.