20 years later I’m softer on it. I still think it sucks, but it’s a funny sucks. And I’ve been able to laugh through other equally terrible (though never as societally elevated) Roland Emmerich pictures including 2012. As long as we’re talking about him as a back-up Rob Cohen, not what we have now instead of James Cameron or George Lucas, I can appreciate him.

But INDEPENDENCE DAY is not remembered like it’s STEALTH. People sometimes discuss it as if it’s a legitimate movie for sane adults to enjoy non-ironically. This sequel has been in the works for years, and it wasn’t the studio that had to be talked into it. Also, as much as I like JURASSIC PARK, I was kind of surprised when the kids who grew up on it helped turn JURASSIC WORLD into one of the biggest movies ever. For all we knew, INDEPENDENCE DAY: RESURGENCE could’ve been an event.

But no, it’s flopping, despite being what I would argue is a decent sequel, because it’s the exact same type of shit, enjoyable in the exact same way, without being a total carbon copy. But society has changed in two decades. They no longer want that type of shit. Is it fair to be proud of ourselves for that? 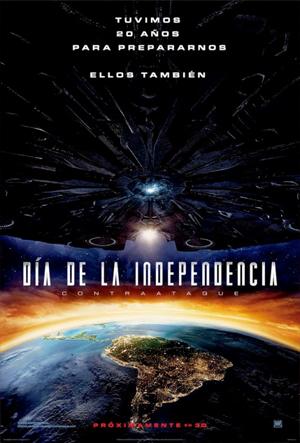 Within the movie, this has been a productive 20 years too. Our scientists have reverse-engineered alien technology and culturally appropriated it so, for example, the president’s helicopter has an alien engine thing on top instead of a propeller. We have a military base on the moon and people fly around in “tugs” equipped with robot arms. (I like the part where one of them holds up a massive falling structure like a robot Superman.) According to an expository presidential speech, all the countries get along now, thanks to President Whitmore’s famous speech that brought everyone together. Jeff Goldblum has gone from “glorified cable repairman” to head of the intelligence apparatus, but he wears a cool guy leather jacket and everybody just calls him by his first name.

The original characters aren’t brought back in particularly interesting ways. The ex-president is treated like he has dementia or some other disorder. Or at least he’s broken down in some way, symbolized by a cane and a scraggly beard… BUT THEN ALL THE SUDDEN HE SHAVES OFF THE BEARD BECAUSE HE IS READY TO SAVE THE WORLD AGAIN MY FRIENDS.

Vivica Fox has gone from being a stripper and main character to a doctor and guest star. Will Smith has gone from being one of the main characters and alive to being a painting hung proudly in the White House because he’s dead. Cause of death: different career priorities. His son (Jessie T. Usher, WHEN THE GAME STANDS TALL) has become a hotshot military pilot in his place. I can’t decide if it’s progressive or just lazy storytelling that nobody ever mentions he’s the stepson, not biological son, when they give him the princely treatment. He’s even the leader of something called “The International Legacy Squad,” which also includes the daughter of presidential UFO exploder Whitmore and the brother of Chris Hemsworth, whose standard issue coolness and occasional smart ass line make him the most likable character (and top billed, above Goldblum!) The children of Randy Quaid’s character, major characters in the first one, apparently did not grow up to be awesome pilots, because they’re not mentioned.

Brent Spiner, whose long-haired mad scientist died early in ID4, is now said to have been in a coma since then, and has a bigger part basically being wacky in the style of Randy Quaid. At least they gave him what seems to be a gay partner, so maybe he’s a personal character to Emmerich. Robert Loggia, who died in real life, makes a brief cameo. I assumed it was digital fakery, but they give him a credit as if he’s in it, and he only died about 8 months ago, so maybe he did film something.

Maika Monroe plays ex-first-daughter Patricia Whitmore. She was so good in THE GUEST and IT FOLLOWS, and she does what she can here. Good for her getting a paycheck, but I would barely have noticed her if I didn’t already like her from those other movies. Angelababy (TAI CHI HERO, RISE OF THE LEGEND) plays Lieutenant Pandering Tothechinesemarket, who gets a couple sassy lines insulting some comic relief guy that’s always hitting on her (Nicolas Wright maybe? Or Travis Tope? I don’t remember the character’s name.)

There are at least two sets of characters who would be completely cut out of a well told story: the group of people on a boat whose only purpose is to occasionally check in via radio about… some space ship thing they are measuring or something, and the group of kids who Judd Hirsch drives across the country in a bus, just so that Judd Hirsch can be in the movie again. Since it’s an INDEPENDENCE DAY movie he coincidentally drives into the same desert where his son is right before the action climax of the movie, which he and the kids watch like they’re at a drive-in.

These days it’s the stupidity that I like most about these movies. Emmerich has already destroyed the whole world in 2012, and audiences no longer enjoy simulated destruction of landmarks, so there’s not much he can do in that department past a few fanatically detailed digital depictions of shifting debris and smoke. Instead I get my thrills from the ludicrous oversights in the world-building. For example, they’ve had 20 years to learn about the invaders, adapt their technology and prepare for their return, but they haven’t bothered to come up with a name for them! They just call them “aliens.” And we are told that there have been no armed conflicts in the world since ID4, yet

1) one of the new characters is a beret wearing, machete wielding African leader (Deobia Oparei, ALIEN 3, GREEN STREET HOOLIGANS 2, DEATH RACE 2) specifically referred to by Goldblum as a “warlord,” and

2) everyone is moved to action again by another speech about setting aside our differences again.

The aliens are not improved in any way, BUT THEIR SHIPS ARE LIKE A HUNDRED TIMES BIGGER. Occasionally we see how big the mothership is in comparison to Earth, and it’s amazing that its shadow alone doesn’t have catastrophic effects. I guess these are the aliens that got called in for backup after the first invasion, but the type of backup where your reinforcements are way more powerful than your invading force and also take exactly twenty years to show up. Our heroes study clues, such as ancient symbols and machinery turning on in the wreckage of the crashed spaceships from last time, and find out about this just in time to not be ready for it.

They also discover a weird alien orb. Goldblum wants to investigate further, but the president (Sela Ward, STEELE JUSTICE) decides to blow it up to be safe. Nobody mentions that this happened when they later figure out those were the good guys.

Since the aliens here are like shitty bootleg xenomorphs, of course we learn that they have a Queen. The gimmick though – and I like this one – is that she’s like fifty feet tall or something. So the finale is a battle against a giant monster running through the desert swatting at the various vehicles that attack her.

I’m sorry guys, I cannot personally consider RESURGENCE to be a good movie, but I can absolutely recommend it if you get a kick out of the ludicrousness of INDEPENDENCE DAY or other Emmerich joints. I was laughing from the opening scene (where the Queen alien angrily watches a video of President Whitmore’s speech) to the last (a set-up for a dumb sequel that I’m guessing will never happen). Don’t worry, I was able to muffle myself out of politeness, but people apparently taking it more seriously seemed pretty pissed at the movie when it was over, so I believe I had the right attitude. Also I would like to note that one guy got up maybe halfway through and made a big show of putting on his coat so everyone would know it was a certified walkout. I definitely got more out of it than him.

aliens Angelababy Bill Pullman Brent Spiner Dean Devlin Deobia Oparei James Vanderbilt Jeff Goldblum Jessie T. Usher Liam Hemsworth Maika Monroe Robert Loggia Roland Emmerich Sela Ward Vivica A. Fox William Fichtner
This entry was posted on Monday, July 11th, 2016 at 11:19 am and is filed under Reviews, Science Fiction and Space Shit. You can follow any responses to this entry through the RSS 2.0 feed. You can skip to the end and leave a response. Pinging is currently not allowed.