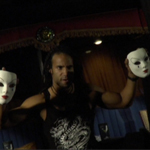 I like the international, multi-cultural flavor of the movie. Sizwe stays with Mpho, a friend from college who’s also African, and ends up hanging out with his American friends who don’t want to learn how to pronounce his name but also don’t want to call him by his nickname “the Cobra” because they say that “that fucked-up-ass movie” by Stallone ruined the name. His diamond connection Nicholas (Jeff Wolfe, BLOODSPORT 2, KNOCK OFF) is the only major white character, a douchey cokehead filmmaker who can sell the diamonds to one 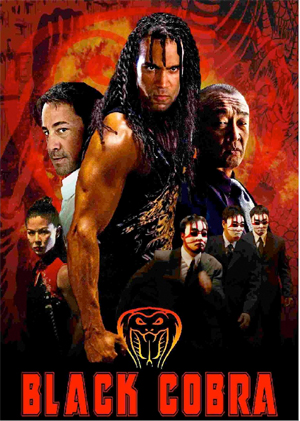 of his investors, Mr. Tanaka (Cary-Hiroyuki Tagawa, MORTAL KOMBAT). I bet this innocents-nervously-meeting-with-movie-producer-to-sell-illegal-goods part was inspired by TRUE ROMANCE.

Of course, not all goes as planned, but believe it or not the trouble doesn’t come from C-H T but from his less honorable son Satoshi (Richard Dorton, Reptile in MORTAL KOMBAT: REBIRTH) who’s supposed to just do security but takes it upon himself to jump Sizwe in a parking garage and steal the money back. They get him with a stun gun first and I think this is the only time a bunch of guys ever attacked Sizwe without him beating them all up and accidentally killing one of them. But I guess it had to happen so that he has a goal: get the money back so he can get his dad back. The son saving his father by fighting the son betraying his father. 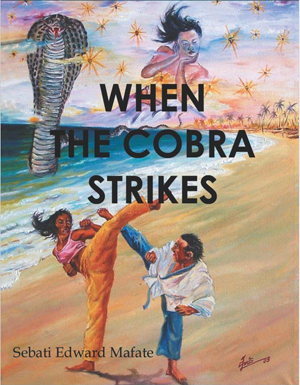 The credits say BLACK COBRA is based on the novel When The Cobra Strikes by Sebati Edward Mafate, which is the guy who plays Mpho. It’s a self-published book that is available on Amazon and has unanimous five star user reviews. But there are only three reviews total. And one of them is suspicious. But the cover is awesome. The pulpiest touch in the movie version is probly the female ninja Jade (Jade Quon, IRON MAN THREE, RAZE) – “a real hot ninja chick,” Nick calls her – who leads the security team, and sometimes they all wear white plastic masks when they attack. They mention this woman a couple of times to call attention to her and then when Sizwe goes to see his Shihan he gets attacked in her backyard by a flipping, spinning, roof-jumping ninja lady.

Ha ha, this turns out to be his master (Stephanie Cheeva, stuntwoman from MISS CONGENIALITY 2) testing him. Good trick, and I’m not sure I can think of another female version of the old master character, but it’s weird because she doesn’t turn out to be very important after that. Too bad. (Also I should note that she is only his Stateside master. He has a male one in Africa.)

The choreography in that little fight is my favorite, very old school, flying on wires like running on air. Storm does seem to be a good martial artist with camera friendly lanky limbs, and apparently he also has Lateef Crowder (THE PROTECTOR, FALCON RISING) as a stunt double. All the fights are pretty well choreographed, though edited a little quick, not generally framed in the clearest or most dramatic way, and never escalating far beyond the scale of an alley fight. The final sword vs. hands samurai duel with C-H T (in a generic warehouse, because the foundry was booked that day) is pretty good.

But I had this problem, maybe unique to me: I could not stop thinking of him as Keegan Michael Key. Storm’s basic look, his fake accent and even his Milli Vanilli type shoulder-length braids reminded me so much of a character they’d do on Key and Peele that I kept thinking of him as the straight man in a sketch that never quite took off. (Coincidentally, the real Keegan Michael Key has an action comedy in theaters called KEANU [unfortunately it’s only okay] and one of the characters he plays is an asskicking long hair guy who does flips and shit.)

There are a couple good jokes. This one about what happens when a show-offy martial artist is introduced to him at a party could be in THE GLIMMER MAN or something, but it’s well delivered:

And I don’t know if this is supposed to be funny or not, but I like when they’re suddenly at a different place and on the screen it says “GILROY’S COUSIN’S HOUSE.” The movie mostly treats itself seriously though, and even opens with a quote from the German poet and philosopher Friedrich Schiller (1759-1805). It’s probly at its weakest when it’s getting into soap opera shit like when Sizwe’s fiance comes to L.A. and thinks he’s cheating on her. Then again, that contributes to kind of a charming doesn’t-quite-know-what-action-movies-are-supposed-to-be-like feel.

Almost everybody in the cast has done voices and/or motion capture for video games. It feels like a bunch of stunt people and voice actors getting fed up and banding together to make a movie showcasing themselves. Storm is not South African, he was raised in Honolulu. He came to L.A. as a dancer and became interested in kung fu and karate. His IMDb bio claims he is a 3 time inductee in the “Martial Arts Masters Hall of Fame.” I’m not sure what to make of that, but as a bit player and stuntman he’s been grinding since the early ’90s.

Apparently he’s somewhere in MORTAL KOMBAT, he was on the kids show V.R. Troopers, the legit ONCE UPON A TIME IN CHINA AND AMERICA, and the terrible Snoop Dogg movie URBAN MENACE. Soon he’ll be in KICKBOXER: VENGEANCE, and his character is just named “Storm.” But some of his bigger roles have been mocap: he played Rampage Jackson in a UFC video game, Colonel Quarritch’s mech suit in AVATAR, “regular body motion” for Colossus in DEADPOOL.

I think playing a character with an accent might’ve been a mistake. He comes off as pretty dorky. But otherwise BLACK COBRA is a good showcase for his skills, and it does have some unique qualities for the genre. It may not excel, but it stands out.

Cary-Hiroyuki Tagawa DTV South Africa T.J. Storm
This entry was posted on Wednesday, May 4th, 2016 at 9:58 am and is filed under Action, Martial Arts, Reviews. You can follow any responses to this entry through the RSS 2.0 feed. You can skip to the end and leave a response. Pinging is currently not allowed.