Hale survives the crash and encounters park ranger Terry Carmichael (Samantha Mathis) and Deakins has devised various ways to slow down anybody else coming in to help, so they gotta John McClane and Zeus Carver it out. Slater and Mathis had already starred in PUMP UP THE VOLUME together. Later Mathis would be in another movie that Travolta was in, THE PUNISHER. They’re all fairly likable, but their characters are bland and lifeless compared to a Chance Boudreaux or a Castor Troy. 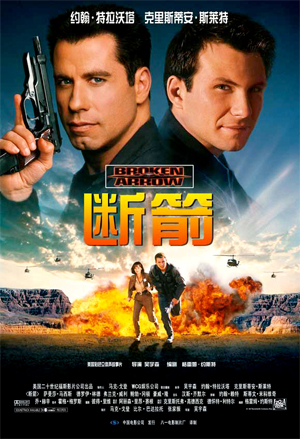 A Vibe article about HARD TARGET mentioned “Maverick director Quentin Tarantino (RESERVOIR DOGS) is working on a screenplay starring Chow [Yun Fat] and an as yet unnamed American actor, to be directed by Woo.” I wonder if that project eventually became THE CORRUPTOR minus both Woo and Tarantino? We never did get that dream team. Instead we waited three years for Woo to direct Travolta during his post-PULP FICTION career boost. BROKEN ARROW also features Frank Whaley (Brett, the guy that Jules Winfield tells to “say ‘what’ again”), who was big in indie movies around that time because of SWIMMING WITH SHARKS. Delroy Lindo, who plays basically the same boss/exposition role as in the recent POINT BREAK remake, had been getting attention for his performance in CLOCKERS, and had also just worked with Travolta in GET SHORTY.

Screenwriter Graham Yost was also hot from writing SPEED (and he would go on to become the mastermind of Justified). But this is nobody here’s best work.

The action involves trekking through the desert and occasionally getting into various scraps involving various vehicles: Humvee, helicopter, train. No motorcycles this time. Too bad. There’s a major section that takes place in a very soundstagey looking mine shaft. Slater jumps around and does an occasional somersault, aiming his guns in more acrobatic ways than was standard for Americans in that era. But it all feels a little forced, and the rarity of the bullets ever hitting anyone sort of takes away their bite.

There’s a good John Woo moment when a grenade causes a collapse with the two leads on opposite sides. There’s some space above the pile of wreckage that allows them to talk to each other, but it’s too difficult to shoot each other. (Deakins does try.) Hale gets to tell Deakins what he’s figured out about his plan and see how he reacts. It’s kind of like a temporary time out.

You could say that Travolta is having fun. He plays Deakins as happy about being a traitor, showing his weird teeth and joking and doing weird things where he looks away and rubs his chin. I think it’s a little too self conscious, though. He did it much better in his later, better Woo movie FACE/OFF.

He’s got a decent sidekick in square-jawed-and-haired-and-chested Howie Long. He’s an amoral soldier who doesn’t realize at first that he’s teamed up with an actual madman. Whoops. This was the start of an attempt to turn the ex-NFL player into an action star, which culminated in FIRESTORM, a notorious flop that’s much more enjoyable than this is.

It seems like Woo was trying his hand at making a normal, boring American action movie, so he said “You know what, it seems like these Americans like helicopters?” There’s a helicopter that crashes head first after Hale shoots the pilot, and then it flips over, one of its rotors swinging at Terry and almost chopping her up. Later there’s another helicopter that gets knocked out by the EMP of a (questionably contained underground) nuclear blast and crashes, also head first, exploding toward Terry and Hale. Still later, Hale flies in on a helicopter to get onto a train, and then it flies low and uses its rotor to chop up one of the gunmen on top (one of the only gore moments in the movie). The copter ends up crashing when the train goes into a tunnel, exploding three times. Immediately after that a guy is attacking Terry on the train next to a helicopter that they have onboard for their getaway, and she kicks the tail rotor so that it spins and knocks him over. Hale sabotages the fuel line on that copter so that when the pilot tries to start it it explodes.

The standard action movie rule is that if a bullet hits any kind of a gas tank or other container holding flammable liquid, that container will instantly explode. I noticed that John Woo U.S.A. follows a different rule. In HARD TARGET the motorcycle gets bullet holes in it and leaks gas for a while before it gets run over and/or hit again by his bullets and explodes. In BROKEN ARROW the humvee leaks gas from bullet holes, as do some barrels of some sort of flammable liquid that then catches fire.

The score is by Hans Zimmer but also Don L. Harper and Harry Gregson-Williams. One of them I think blew it with the way-too-busy music during the mine sequence, but the slower, more Zimmery stuff would be perfect for a better Woo movie. The guitar parts are played by Rock n Roll Hall of Famer Duane Eddy. I guess that sort of sets the stage for Zimmer’s rock band scoring of Woo’s MISSION: IMPOSSIBLE 2 four years later. 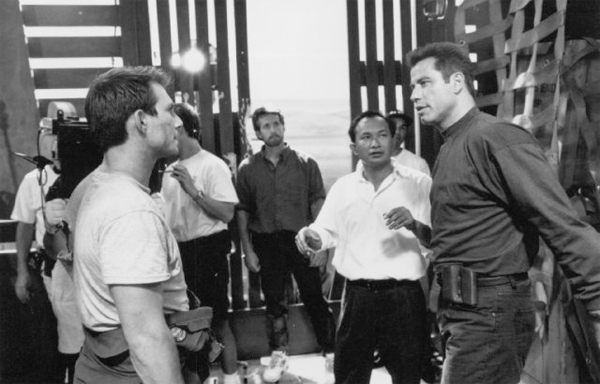 In researching the history of BROKEN ARROW I found a reference to it being re-edited by the studio, but no details. The credited editors are Joe Hutshing (JFK, SAVAGES), Steve Mirkovich (BIG TROUBLE IN LITTLE CHINA, CON AIR, THE PASSION OF THE CHRIST) and John Wright (SPEED, DIE HARD WITH A VENGEANCE). None of them worked on other Woo movies, and at times it felt to me like they weren’t quite in sync with his style. There are some well choreographed sequences of jumping onto and hanging off of moving vehicles, shooting, getting knocked around, chain reactions that seem like cool ideas but play out a little stiff, like maybe they should be moving a little faster. But this might just be because the actors did alot of their own stunts, and they aren’t exactly Jean-Claude Van Damme.

I always wondered if it was the studio or the bad experience with HARD TARGET that caused Woo to tone down his style to the point of practically seeming like a TV movie here. I think maybe he was trying to be culturally sensitive by respecting the opinions of the stupid motherfuckers who laughed at his operatic style in the test screenings of HARD TARGET. I found an interview where he says that after that experience “I took the time to learn more. I watched TV every day, kept in touch with other people and saw how they talk, how they feel. I found out what the real culture is. Then I had more compassion for the society.” Big mistake.

Other than a (humorously out of place, I must admit) shot of Travolta slow motion strutting into frame to the tune of his theme song…

…there is very little of Woo’s visual style. I did notice one poetic touch that I suspect Woo added or elaborated on: the camera follows a butterfly in flight across the water, meeting up with a large swarm that flutters toward our heroes standing on the shore in the distance. It ends up being mentioned in the dialogue (he says there can’t be radiation in the air, or the butterflies would be dead) but I’m betting the script doesn’t specify such fanciful visual emphasis on them. Also the shot resembles the show-stopping carrier pigeon one that bridges RED CLIFF parts I and II.

Woo actually considers BROKEN ARROW “closer to my style” than HARD TARGET because he gets in a little of his beloved theme of bonding between hero and villain, having them be former partners who sort of have in-jokes with each other, like using boxing terminology and having twenty dollar bets even as they battle over nuclear missiles. In the end when Hale discards the singed twenty left behind by Deakins he looks sad about the death of his former friend.

I feel like BROKEN ARROW is a somewhat forgotten film. It probly doesn’t help that as of this writing Amazon’s DVD and blu-ray links go to an audio cassette of the soundtrack, but the movie’s only-okayness has got to be the main factor. Overall ’96 was not a great year for action movies, but there were certainly better. MISSION: IMPOSSIBLE, in fact, did the American-helicopter-action so much better that Woo was forced to do a sequel to it. EXECUTIVE DECISION was a better take on a DIE HARD/UNDER SIEGE/SPEED type movie with pilots. THE ROCK in my opinion is not a very good movie, but with Cage’s performance is more memorable and honestly it has a more Woo-worthy honorable villain (maybe thanks to Tarantino’s script-doctoring?). I’ll have to revisit MAXIMUM RISK and THE QUEST, but I feel like those are better. THE PHANTOM, SET IT OFF and ESCAPE FROM L.A. aren’t really in the same genre, but are all movies with action elements that are much more fun and memorable than BROKEN ARROW. I think I also prefer LAST MAN STANDING, as flawed as it is. And I guess we could argue whether BROKEN ARROW is better or worse than ERASER, DAYLIGHT or BARB WIRE.

In fact, this movie is pretty representative of the failed hopes of that period 20 years ago. There were such thrilling new things going on in film in the couple years before that it was easy to get swept up. We were so excited about any John Woo movie, and we were so excited about reborn John Travolta. And then they kept disappointing us with movies that were not quite there. But you know what? We just had to be patient. They worked themselves out after a while. Sometimes great things take time.

1) One of the themes was used as Dewey’s theme song in SCREAM 2, which people still watch sometimes

2) The name “Ain’t It Cool News” comes from the scene where Travolta’s told he’s out of his mind and he says, “Yeah, ain’t it cool?” Weird but true.

Christian Slater Delroy Lindo Frank Whaley Graham Yost Hans Zimmer Howie Long John Travolta John Woo Samantha Mathis
This entry was posted on Wednesday, April 27th, 2016 at 8:57 am and is filed under Action, Reviews. You can follow any responses to this entry through the RSS 2.0 feed. You can skip to the end and leave a response. Pinging is currently not allowed.