Slater plays an ominously narrating fed up office drone who loads the gun in his desk and tells us who each bullet is meant for. But he decides today is not the day to go postal – timing is important. When he gets home his goldfish (a CGI cartoon like the one in the CAT IN THE HAT movie) scolds him for pussying out. “If I’d gone through with it nobody would be here to feed you,” he says, but the fish isn’t convinced. “I don’t care as long as the bastards are dead!” This is definitely one of the bitterest CGI animals outside of, obviously, Garfield. 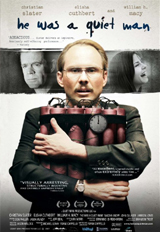 The next day the timing does seem right. His douchebag superior is treating him like shit so he loads the gun… but accidentally drops one of the bullets on the floor. On his knees trying to pick it up he suddenly hears gunfire… turns out one of his co-workers beat him to the punch. He has a conversation with the early bird gunman and ends up having to shoot  him. That makes him a hero and gets him promoted to the top floor as VP of Creative Thinking. Maybe life isn’t so bad after all.

The movie ends up being about his relationship with Macy’s former assistant, who was paralyzed in the massacre. I didn’t recognize her as Elisha Cuthbert from ’24’ because she’s brunette and better than usual. She has trouble adjusting and he helps her, finding new happiness but also new things to be paranoid about (what if she wasn’t in a wheelchair? Would she even give me the time of day?) He has to try to hold onto this new happiness and hope nobody figures out that he’s crazy. I think their relationship is interesting – sweet despite underlying creepiness, kind of hot despite being between a balding Slater and a quadriplegic Cuthbert. And they’re both really good in it. When he starts to lose it and she tries to talk him down there’s a sense of an actual good relationship there. I really thought she could fix him.

SPOILER PARAGRAPH: But I felt let down by the ending. If I understood it correctly, all this craziness was a fantasy he had in those moments before picking up the sixth bullet. There was no second gunman, no love affair, no promotion. I think that’s bad storytelling, because the idea of a story is to show you something unusual. Those things are interesting because of their far-fetchedness. If you’re gonna get my interest for 90 minutes and then say, “No no, just kidding, actually some more normal stuff happened” I’m gonna feel let down. A twist has to be something more crazy than what happened pre-twist, it cannot be less crazy, that doesn’t work. It’s like having a dry dinner roll right after birthday cake.

Still, I recommend this one. It’s full of things I’ve never seen before, and I like that. It’s not that well-tread of a formula, and I like that it goes for emotions before laughs. It walks a delicate balance of making you sympathize with this guy and also fear what he might do. Come on dude, you’re in love. Don’t kill anybody.

Note: not connected to THE QUIET MAN starring John Wayne. Except in the sense that both are movies that exist

Christian Slater Elisha Cuthbert Frank A. Cappello William H. Macy
This entry was posted on Wednesday, February 10th, 2010 at 4:24 am and is filed under Comedy/Laffs, Reviews. You can follow any responses to this entry through the RSS 2.0 feed. You can skip to the end and leave a response. Pinging is currently not allowed.