I get alot of emails these days asking for a new Vern Tell’s It Like It Is column, with all the political business. Because there’s so much going on and some people I guess want to know what I have to say about it. Except one guy. There was the guy who wrote to me to say I was good with movies but I need to never talk about politics because I just copy the “talking points” from moveon.org. I checked out that web sight and it was a good suggestion but I couldn’t find a link for the talking points so I guess maybe that’s why I haven’t done a new column in a while.

Obviously the first order of business has to be this Valerie Plame/Karl Rove thing. But I mean, I don’t got much to say that hasn’t been said already. My reaction when I first heard about it obviously was like Roddy Piper in THEY LIVE when he sees all the rich ladies in fur coats and businessmen in ties are actually skeleton faced alien invaders, and he says, “It fuckin figures.” I remember Joe Wilson saying way back when this thing started that he thought Karl Rove was the leaker, and I wondered why he’d say that if there wasn’t more to it we didn’t know about. But then he backed off from that statement and I was as surprised as anyone to see it actually come out into the open all this time later.

Those first couple press briefings with Scott McLellan were fuckin A+ comedy classics. Man he must’ve been surprised to find out that somebody had attached balls to the entire press corps over the weekend. And disappointed not to have Ashton Kutcher ever show up. Also of note, the recent incident with Robert Benedict Arnold Novak losing it on “Inside Politics.” If you missed it, they were talking about Katherine Harris and James Carville made a little snipe at Novak about having to prove to the Wall Street Journal editorial page that he had backbone (not sure I totally follow that one), Novak said, “I think that’s bullshit and I hate that.” Then after a moment of contemplation he just got up and walked away like he was suffering from dementia.

I don’t think he did it on purpose but I gotta thank James Carville for being the one to finally get Novak booted off of TV. I can’t believe how long CNN was willing to pretend that dickhead was a worthwhile expert whose opinion we should listen to. I’m sure alot of you got grey hairs yelling at the TV during the election coverage every time he offered an opinion. WELL OF COURSE YOU’RE GONNA SAY THAT YOU ASSHOLE, YOU’RE THEIR FUCKING HENCHMAN. He outs a CIA agent for them, then he’s supposed to turn around and give a fair assessment of the election? It’s like Igor doing an analysis of Dr. Frankenstein.

Also I’m not surprised to see Judy Miller wrapped up in this whole mess. I got no idea if the theories about her involvement in the leak are true, but if so it’ll be “It fuckin figures” again. It felt pretty fishy hearing about her as a great champion for journalists when she’s probaly the biggest symbol of how far journalism has sunk. If you haven’t been keeping score, she’s the one who wrote all those stories on the front page of the New York Times about supposed proof of weapons of mass destruction in Iraq. The stories were obvious horse shit at the time, I’m sure I ranted about them in one of these columns if you go back and look. Her sources turned out to be Ahmad Chalabi and Curveball, completely discredited people who no reasonable person trusted at the time and whose claims in those articles have since been disproven and debunked twenty-six ways to Sunday.

Years down the line, regardless of how the leak probe goes, Judy Miller will be one of the villains of this whole fiasco. She was a willing pawn to the administration and without her or somebody like her willing to do that job, the war might never have happened.

Here’s how it works:

So of course in the world we live in today, the chump who wrote those stories is declared a hero of journalism. I don’t know if they do it on purpose or if they’re just such horrible people that their involvement in anything turns everything backwards and rotten. They have people talking about journalists protecting their sources and comparing it to Watergate. But it’s backwards. In Watergate, the anonymous source was a whistleblower. In this one, the anonymous source is somebody high up in the government, leaking information in order to punish a whistleblower. They got us twisted around trying to defend their right to abuse power.

By the way, you gotta appreciate the irony of Bush’s buddy Rafael Palmero testing positive for steroids. Remember during that state of the union speech when Bush talked about steroids being a problem in pro sports? And even back then, when everybody was bending over backwards to pretend he was doing a good job, people were scratching their heads. What the shit? Our buildings are falling, our freedom is eroding, nuclear weapons are growing like dandelions and you’re worried because Bret Boone looks more muscular than he used to?

Of course, one thing politicians love is wasting their time on phoney non-issues like violent movies, rock music, video games, satanism, steroids, killer robots, etc. So next thing you know congress has decided this is more important than health care, not dying, etc. and congress holds hearings. And at these hearings, Bush’s buddy Palmero, recent record breaker and legendary boner bearer, testifies that he does not use steroids. Which it turns out, may have been an exaggeration.

Ah, shit. Let’s talk about movies now. I keep reading about this movie slump, I guess movies aren’t making as much money as they did last year and that pretty much proves that movies are dead forever and everybody’s just gonna read books, talk to each other, etc.

Well I don’t know about all that but personally I thought this was the best summer for movies in a long god damn time. I mean I guess I avoided the ones that looked bad, but I didn’t see too many pictures I didn’t like this summer. I liked the Star Wars, I liked the Batman, I was really surprised by War of the Worlds, I loved Land of the Dead. More recently Devil’s Rejects although that one’s not for everybody.

(By the way, too bad about Matthew McGrory, who died Tuesday at only 32. In a great cast of crazies he was my favorite character, Tiny, the giant with the bag over his head. He also played a giant in BIG FISH.)

I gotta admit I even saw some kiddie movies that were good. Howling Castle was cool, Chocolate Factory was fun, Bad News Bears had kids swearing which is very realistic. Stealth wasn’t good but then, I didn’t want it to be good. Wedding Crashers was about the only thing I saw that was alot worse than I was hoping. So fuck money, man, I’m okay with the movie slump so far. More slump, please.

SNAKES ON A PLANE!

If there’s one movie that’s gonna turn the slump around though I guarantee it’s SNAKES ON A PLANE. That’s right, somebody tipped me off, according to fangoria.com I got my wish and they switched the title back. I loved that title because it is not a metaphor, it is actually a movie about snakes on a plane.

You would see that movie, right? Of course you would. But then they changed the title to PACIFIC AIR FLIGHT 121 or some stupid shit like that. I complained about it in my Ain’t It Cool News review of Steve Seagal’s SUBMERGED and it seemed like the people of America agreed with me. Just the other day I was telling somebody they’ll probaly change it back because of RED EYE and FLIGHT PLAN. With Pacific Air 121 people would mix up the different airplane thrillers. But call it SNAKES ON A PLANE and everybody will forget about that other shit.
However, since the story on fangoria.com did not specify a reason for the switch, I will assume they read my review of SUBMERGED and have been having meetings about it for months trying to make it happen.

One last thing. You see this picture here? What the fuck is this? 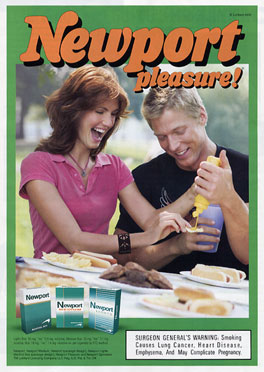 I’ll tell you what it is. It’s two people pouring mustard on a god damn Ruffle. Now I’m not trying to single out Newport. Only Kool rivals them in providing fine opportunities for prisoners to collect points and earn items such as t-shirts and hats. But come on, man. Pouring mustard on a Ruffle? Why would you do that? What does it mean? Why are these people enjoying it so much? And what does it have to do with cigarettes?

I know when two beautiful people are in love, and they’re having some kind of barbecue with hot dogs and little chunks of unidentified meat, they tend to do crazy things. And you know, they got different kinds of flavors of chips in other countries. I know they got ketchup flavored in Canada. So maybe mustard on a Ruffle makes sense, I don’t know.

But that still doesn’t explain what it’s doing on an ad for cigarettes. Is this a Freud thing? Maybe Freud said that if you dream about two people enjoying putting mustard on a ridged potato chip, it means buy Newports. The mustard could be a metaphor for menthol, maybe.

I figure this probaly means something, it’s just over my head. So someone please explain it to me. thanks.

UPDATE: I tried putting mustard on a Ruffle. It actually wasn’t that bad. But it didn’t remind me of Newports really at all.

This entry was posted on Thursday, August 11th, 2005 at 7:17 am and is filed under Vern Tells It Like It Is. You can follow any responses to this entry through the RSS 2.0 feed. You can leave a response, or trackback from your own site.