But it turns out not to be what I thought it was.

In addition to the psychological trauma she gets an STD that she self diagnoses as “Vietnam Rose,” which she hears is fatal. She doesn’t get her medical advice from the most trustworthy sources – escorts at the night club where she starts working, a pervy unlicensed doctor her friend brings her to…

…who at least has enough medical knowledge to be horrified by what he sees – but she’s definitely experiencing pain, bloody discharges and other scary symptoms. She has something.

In a way this seems like a questionable story element. Yes, the belief that she’s dying gives her an additional excuse to go for broke in her revenge. It could’ve also been used as a ticking clock, she has to find them all before her health deteriorates, but that doesn’t come up much. The STD also could’ve been used as a method of execution for whichever rapists didn’t give it to her, but that doesn’t come up either. (In fact, I didn’t catch any reference to one of the rapists being sick, or this being a disease that can affect men at all.)

Mostly I suspect it was included as the revenge motive. They killed me, so I’ll kill them. In that sense we can say that I SPIT ON YOUR GRAVE is a more enlightened movie in that the sexual assault was enough of a motive, she didn’t need to be dying.

On the other hand, the inclusion of the STD is important because it shows the tragedy of a society that puts shame on sexual problems. She won’t go to a real doctor even though she obviously knows she should. All she’ll do is stand outside looking at the sign in a montage and then get nervous and leave. 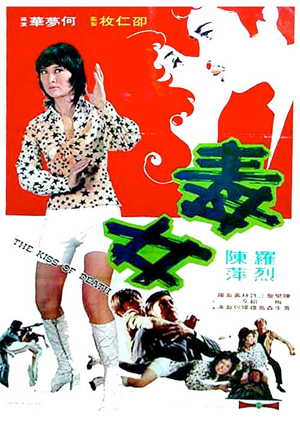 She’s much more self assured in the vengeance department, though. She finds out her boss at the night club, Brother Wong (Loh Lieh, 36TH CHAMBER OF SHAOLIN, SUPERCOP), though he walks with a cane, is a martial arts expert capable of beating up a bunch of dudes at once when they get out of line with the girls (which they keep fucking doing, this place is in serious need of a Dalton). So she tells him her story and convinces him to come out of retirement to train her to fight.

(Important note: she doesn’t tell him about the disease, only the attack, and he understands why she needs revenge. So that may negate my earlier points. But I still made them. Life is complicated.)

I like the editing of the movie, jumping quickly from the middle of a conversation to get to the good stuff. For example when a friend shows her a deck of razor-edged playing cards it doesn’t linger, it cuts immediately to a montage of her practicing throwing the cards into things, outfit changes signifying the passage of time as she grows from incompetent beginner to master markswoman at aiming for crotches.

Crotches are definitely her main target when she starts going after those sick motherfuckers. She finds them one-by-one, lures them in with dates, stabs them in the dick with a pair of long surgical scissors she tucks into her go-go boots. Before that she’ll fight them and of course she’s gunning for maximum ball damage.

It’s a testament to their scumminess that they don’t even remember who she is at first. They don’t recognize her. They figure out someone is stalking them and crossing them off a list, so they do some detective work. But when they find the way to her apartment they see her roommate, who has thrown on her fur coat to keep warm while running out to try to get her more medicine for her STD. (She shoulda kept track of that herself, but it’s good she has a nice friend.)

Now, you think there’s gonna be a case of mistaken identity here because of the clothing, but get this, when they see the roommate they recognize her as someone whose life they also ruined. So naturally they assume that she’s the one who’s trying to get revenge. Our girl has to narrow it down for them by identifying herself as “the lady on the roof.”

Well, at least they didn’t have to ask which roof. I’m relieved that that was enough information for them, honestly. These guys are terrible.

At the end she and Brother Wong get to use their moves against two remaining rapists and a bunch of fighters they call in for backup. She does alot of flipping and rolling kicks, hangs from a ceiling fan, gets knocked through tables, chases them like they chased her, drops down the outside of a stairway parkour-style to get ahead of them. So there’s an extended series of fights at the end, but overall it’s not as much of a fight movie as most productions of Sir Run Run Shaw.

But the modern setting does give it a certain visual advantage over other Shawscope epics. The ’70s night club sets and fashions are very colorful. I don’t mind that Shaw Brothers heroes usually are monks wearing rags, but it’s kinda cool to have one about a woman with a large collection of eye-catching floral print dresses and blouses.

Of the movies I’ve seen called KISS OF DEATH, my favorite is still the one where Nic Cage shows off in a strip club by benchpressing Hope Davis. And this is not one of the better Shaw Brothers movies I’ve seen either, but it’s a worthwhile curiosity. I always enjoy seeing a woman kill a bunch of rapists, and it’s interesting to see how this formula plays out in the context of a different culture and filmmaking tradition.

Chen Ping Loh Lieh Meng Hua Ho rape-revenge revenge Shaw Brothers
This entry was posted on Wednesday, April 16th, 2014 at 1:35 pm and is filed under Action, Reviews. You can follow any responses to this entry through the RSS 2.0 feed. You can skip to the end and leave a response. Pinging is currently not allowed.