I think Miles sees himself as pretty cool, not a loser, even though he’s not having the success he’d like in wooing his co-worker Julie (Susannah York), and is later revealed to own a Superman lunchbox. Maybe having a cool name like Miles balances that out, I’m not sure. He also has a passion for rare fish, which he keeps in his aquarium, that’s what he spends his extra money on.

Let me be clear on the theory of badass juxtaposition – you gotta first be clearly a badass, then have the juxtaposition, for it to be a thing. If this was Clint Eastwood collecting fish and using the lunchbox either of those things would increase the badass quotient. Since it’s Elliott Gould it only makes him further away from being badass. But that doesn’t make him a bad person. It takes all kinds, and this movie needs to have kind of a weiner in the lead so that he’s vulnerable and then surprises and inspires us with his capabilities. 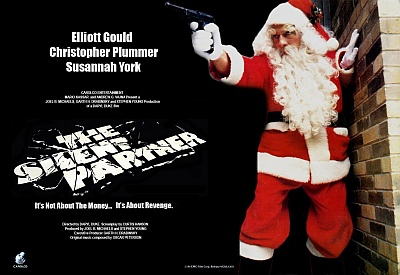 I guess I should get to the plot so you’ll understand that. Through luck and coincidence Miles figures out that the mall’s Santa (Christopher Plummer) is planning to stick the place up. But he doesn’t tell anybody or try to foil the plot. Instead he plans ahead to use the robbery as an excuse to skim some money for himself. When the robbery finally goes off he’s ready, he gives Santa some of the money, delays long enough to help him get away, but has some of his till money set aside for himself. It’s very suspenseful and interesting because none of this is explained beforehand, it’s very procedural. You just gotta watch what he’s up to and see how it unfolds.

Now, Santa sees the reports on the news, hears the figure of how much was stolen, and figures out what happened. At this point most thieves would smile and say, “That crafty sonofabitch!” and take the hit. But this guy’s a total psychopath. We see how he takes it out on a teenage prostitute and we know this guy is gonna come after the money no matter what.

So the movie is basically a showdown between these two. There are a few other characters (including John Candy in a small not-really-comedic role as one of his co-workers), but it still feels almost like a two-man play. Can Miles outsmart Santa before Santa out-crazies Miles? Caught in between are two women: Julie, who he finally gets a shot with and blows it because of robbery-related anxiety, and Elaine (Celine Lomez), the 22 year old nurse who (SPOILER) obviously is some sort of Santa’s Little Helper, but then falls for Miles and switches sides. I don’t know, man. I don’t really believe in Gould’s power of pussy magnetism here. I bet Hanson was picturing Robert Redford or somebody.

On the other hand I definitely believe in the evil of Christopher Plummer. He’s truly fuckin scary here, and he does it mostly with his eyes. Even when he’s in the mall being Santa his eyes look pretty spooky. Even if they never found out he was a bank robber Santa I’m sure those pictures still creeped out Canadian families for years to come. 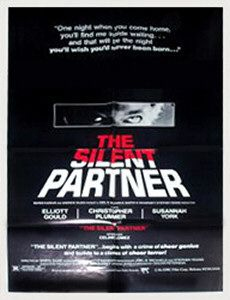 At one point he shows up at Miles’s apartment to scare him into giving up the money, and he flips the mail slot open and looks inside. Even he knows how scary his eyes are. And the marketing people too, ’cause they made a poster of that scene.

And without giving away any details I will report that he most certainly delivers on the threats his eyes make. This isn’t a horror movie, but some horrific shit does happen. So Miles earns our respect with his unexpected skill in handling this fuckin maniac. He’s clever, he’s bold, he takes advantage of his access to the bank, he goes to lengths we wouldn’t have expected.

I’m not sure what he plans to do with the money. He seems to do all right, but that’s how it is, isn’t it? You always wish you had more. I’m sure he could buy some good fish with that money, but probly not an Ice-T-on-MTV’S-CRIBS style shark tank or nothin like that.

I have to say though, for me personally there was a point where I couldn’t side with him anymore. (SPOILERS from here on.) Once Santa Claus has decapitated your girlfriend I think you gotta go okay man, you win. Go to the cops, etc. If you do what Miles does – dispose of the body and figure out an ingenious plan to make off with the loot – you may have some emotional issues, in my opinion.

You know what else threw me off was the way the other gal figures out what happened and immediately falls for him and becomes his accomplice. Wait, what? You were stealing money from the bank we both work at? That’s why you were being such a dick to me? I love you then! Let’s go spend the money!

Come to think of it, in the end the bank manager is less trustworthy than the 22-year-old double agent. I wonder if this is a statement about white collar crime? These bankers are as crazy and cold as the street punks. And they collect fish.

Christmas Christmas crime Christopher Plummer Curtis Hanson Elliott Gould heists John Candy Susannah York
This entry was posted on Thursday, December 23rd, 2010 at 2:47 pm and is filed under Crime, Reviews, Thriller. You can follow any responses to this entry through the RSS 2.0 feed. You can skip to the end and leave a response. Pinging is currently not allowed.

19 Responses to “The Silent Partner”