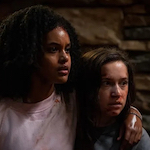 SICK is a new independently produced slasher picked up by Blumhouse and Miramax (?) but sent straight to the Peacock streaming service. For me it was a must-watch-immediately because it’s the latest from John Hyams, who has been a top director in my mind since UNIVERSAL SOLDIER: REGENERATION back in 2009. (See also: THE SMASHING MACHINE, RANK, DRAGON EYES, UNIVERSAL SOLDIER: DAY OF RECKONING, ALONE). But outside these parts he’s not that well known, so the marketing is all about it being the latest from Kevin Williamson (SCREAM, THE FACULTY). He co-wrote it with Katelyn Crabb (whose only previous credit is as his assistant on SCREAM ’22).

I believe it’s a script they came up with and/or wrote during lockdown, so the gimmick is that it’s set during that surreal time of toilet paper scarceness and droplet paranoia, specifically April 3, 2020. A young man named Tyler (Joel Courtney, SUPER 8, THE EMPTY MAN) gets to be the Drew Barrymore of the cold open, getting creepy texts from an unknown number while he’s trying to buy groceries.

This scene really took me back to a few years ago and that initial strangeness of six foot gaps in lines, directional arrows on floors, signs about masks taped up everywhere, the terror of public coughing. I had a few nitpicks (I sure wasn’t that comfortable in a busy store at that time!) I think it really captures the moment. The characters in this movie try to follow the safety precautions that continue to be useful (masks, hand sanitizer) as well as the ones we just did because we didn’t know better (scrubbing groceries, trying to disinfect the air); things that turned out to be more like totems against supernatural evil than health safety best practices. 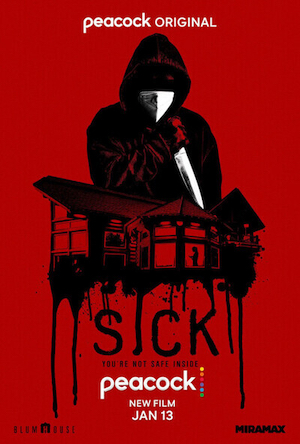 But SICK is less about trying not to get infected than trying not to get stabbed. Back at his apartment Tyler is attacked by somebody dressed in all black, including the face covering – P.P.E. as murder disguise! Surprising no one who has seen a John Hyams movie, he directs the fuck out of a guy trying to fight off an attacker in a small apartment. Hyams’ last movie ALONE was also a horror-thriller taking full advantage of his top shelf action and chase scene chops, and even before that it should go without saying that he’s perfect for directing a movie full of cat-and-mouse chases and skirmishes.

So here’s the set up: college student best friends Parker (Gideon Adlon, THE CRAFT: LEGACY) and Miri (Beth Million) decide to wait out lockdown in isolation by driving to Parker’s parents’ summer home, a huge fancy lodge on a lake. Miri worries about infecting her dad, so she’s big on masks and stuff, but Parker promises her there will be no one to breathe on them. “The only neighbor is the Lyons’ cabin two miles that way.”

That’s good old fashioned horror movie construction there, establishing where to go when help is needed, and more importantly turning every unexpected noise, open door that you thought you shut, or movement in your peripheral vision into a threat. It’s a classic scare technique that’s very effective on those of us who prefer living with other humans around. A big empty cabin next to woods, a farmhouse out in the boonies, even a suburb at night is creepy because there aren’t supposed to be people around, so if there are you fear them.

Like Tyler, Parker gets some mysterious texts that imply (as some of the camera angles do) that someone is watching her. Unlike anybody in most of the SCREAM movies, they have to contend with the fact that they’ve posted their whereabouts and activities on Instagram. Their conversations establish a couple possible boys to be suspicious of – Benji (Logan Murphy), a guy Parker made out with at a party (during Covid!?) and DJ (Dylan Sprayberry, young Clark Kent in MAN OF STEEL), her sometime boyfriend.

Not long after they’ve established that they are and will continue to be totally and completely alone, a big truck pulls up to the cabin. And then someone knocks loudly on the door. They yell for him to identify himself, and he doesn’t. What the fuck? After much hesitation, Parker takes a kitchen knife and approaches the door… and Miri takes her mask out and puts it on.

I imagine some will take that as a “ha ha, she’s silly” joke, but I took it as an “it’s funny ‘cause it’s true.” It’s funny in a movie context, but it’s true because I absolutely would’ve put a mask on if somebody came to the door at that time. I’d still probly do it now. And let’s say a murderer comes to your door and you successfully fight them off. Do you want to then have their Covid? Personally I don’t, and Miri doesn’t. This is our choice.

There’s a similarity to BODIES BODIES BODIES, where a group of friends go to one dudes’ parents’ mansion to wait out a hurricane. But they had more people, more drugs, and more opportunities for us to laugh at them. These guys manage a pretty good pandemic era game (watching CNN and drinking whenever Fauci is mentioned), and a basement dance party with strobe lights, slo-mo and Miri spraying Lysol around like it’s a cool rave accessory. (It’s too dark to tell if she knows it’s funny or not.)

Adlon and Million both have the natural presence and friendship chemistry required to make a movie like this work. They get to be likable and funny without the script ever seeming quippy or stylized in that SCREAM sort of way. And then they go above and beyond standard physical requirements for the genre. There’s a part where they sure seem to be running barefoot on concrete!

I wondered for a bit if Miri’s stringency about masking and social distancing would qualify her for Final Girl status, but it’s not about that, and it seems Williamson is on board for the current project of obliterating “the rules” he commented on in SCREAM. Both the wild girl and the uptight one enjoy getting drunk and smoking fat joints, and Parker could be considered the main character even though she’s the more promiscuous and irresponsible of the two.

And damn, Parker reminded me of Pamela Adlon, but I didn’t guess the actress was her daughter, even though I went through the same thing with Odessa A’zion in HELLRAISER ’22 a couple months ago. I don’t know if there are any other siblings out there, but for now on I’m gonna wonder any time there’s a charismatic raspy-voiced horror heroine.

Before long, of course, the killer makes his move. Hyams, his cinematographer Yaron Levy (NEVER BACK DOWN 2, EL GRINGO, UNIVERSAL SOLDIER: DAY OF RECKONING, GETAWAY, FALCON RISING, Scream: The Series, Black Summer), and his frequent editor Andrew Drazek draw out the tension with the dark figure slinking around in the background, seen only by us. They lay out where each of the characters plug in their phones when they go to sleep, so we can see them get snatched in the night. And then there’s an attack and lots of running, bashing, hiding, climbing, being thrown over, on and through things, stabbing, bashing, trying to drive away, trying to run away, trying to get help.

They put up a longer and better fight than your average slasher victim, and the mistakes they make are very plausible. If you know you’re in a horror movie you better run out the front door instead of saying “Fuck you, dude!” and stomping the guy you knocked down, but I believe people would do that in a real home invasion.

I saw a review on Collider that (despite being fairly positive) said SICK is “a pretty formulaic slasher flick until the third act… and getting there takes a bit of patience,” but to me the formula, and the getting there, are the reason for the season. In that sense it feels more like Hyams’s other work than Williamson’s – if you want funny lines and surprise reveals there are some, but they’re not the main order of business. Fuck a whodunit or a satire of our times, this is a real deal slasher about the essential topic of people fighting for their lives. The running and scrapping sequences take up a larger percentage of SICK’s breezy 82 minutes than most slashers can manage, and it’s executed with momentum, flair and variety, making full use of all the locations and props, just like a good fight movie would.

But then, yeah, you arrive at your destination. Part of what’s scary about the scenario is the idea of not having any idea who’s attacking you or why. There must be some reason, but fuck if you know. I get the sense Parker really wants to scream “Who the fuck are you?,” but she’s preoccupied by dodging the knife blade jabbing at her between slabs of wood.

I guess I sort of knew that, this being a Williamson script, there would be a big reveal of the killer and their motive at the end. It’s a choice I understand intellectually – they take one of the more popular slasher movie motives and put a Covid-specific spin on it – and some of the related gimmicks are very clever. (SPOILER: disposable mask with chloroform on it.) For me, though, the unmasking and explaining somewhat broke the spell of the movie, because I so believed in the reality of the characters and setting and now suddenly I gotta switch over to this heightened, only-in-the-movies idea about somebody responding to tragedy by suddenly being very good at sneaking, stalking, scaring and stabbing. I can believe Pamela Voorhees would do it because it’s a movie that came out when I was in kindergarten, I can believe Billy and Stu would do it because they’re trying to mimic movies like that one, I can’t believe these particular people would’ve wanted to or known how to do it during lockdown on April 3, 2020.

vague ending spoilers this paragraph only: If the killer’s motive is a way for SICK to speak to the fears of the moment, it’s not a fear I relate to. I’m afraid of being the one to give somebody Covid, but what’s illustrated here is being blamed for it after you give somebody Covid. When Parker finds out about it she’s a little too preoccupied trying to escape from maniacs for us to find out how she feels about it.

That’s okay. The meat and potatoes that make up this “formulaic slasher” are prepared exquisitely, and I usually want a gimmick-based horror movie to go all the way with its theming, which is what they do here. In the long run, if it’s meant to be a time capsule of this era, that might be for the best. For me SICK doesn’t land very smoothly, but man does it go off that jump.

Beth Million COVID-19 Dylan Sprayberry Jane Adams Joel Courtney John Hyams Katelyn Crabb Kevin Williamson Marc Menchaca
This entry was posted on Monday, January 16th, 2023 at 7:05 am and is filed under Reviews. You can follow any responses to this entry through the RSS 2.0 feed. You can skip to the end and leave a response. Pinging is currently not allowed.