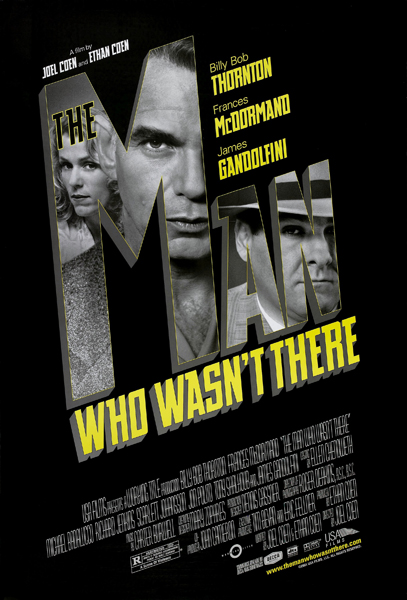 These are the two things I know about the Coen brothers:

1. Everybody and their uncle e-mails me and says “Vern, you gotta check out this movie fargo, blah blah blah, the big lebowski, ha ha ha etc.”

2. They have titles I can’t make heads or tails of, like O Brother Where Art Thou and The Man Who Wasn’t There. What in fuck’s name is that supposed to mean? Nobody knows.

And now, #3 thing about the Coen brothers: their new one is one of the best movies I saw this year. Maybe not better than Brother, but up there with Ghost World and Scratch.

What this is is basically a film noir throwback. None of this neo-noir, updating the old routines for a modern audience bullshit like the Dahl brothers did in Red Rock West, or the Wachowski brothers did in Bound, or the Coen brothers did in Blood Simple. Which was a great fuckin movie, by the way. But still. What we got here is an old fashioned, black and white, Double Indemnity/Postman Always Rings Twice type shit. In fact this one wears its debt to the great author James M. Caine on its sleeve, even prominently using the name “Nirdlinger” which was the gal’s unfortunate name in his book Double Indemnity.

This ain’t a fucking parody. It’s an actual film noir. It happens to be a film noir made by these two goofball brothers, so the dialogue is all funny as hell, and it’s about barbers and what not, and it gets off on some weird tangents, but still. It’s real. The biggest twist is that instead of talking a mile a minute like Fred MacMurray and the other fellas, the protagonist here barely talks at all. Billy Bob Thornton plays Ed Crane, a barber who gets caught up in murder and blackmail type circumstances. And for most of the movie he stands around and smokes cigarettes and looks like he’s thinking real intensely about something. Or he just sits there while everybody yaps and yaps and he has this look like, why don’t these people shut the fuck up? And it makes you side with him no matter what he does. If there is a message to this movie, and who knows if there is, I only saw it once. But if there is a message, it is a non-verbal type message. Like, some things you can’t say in words. You just, you know, you just sort of, whatever. The coens are ridiculously meticulous Writers, who know how to masterfully construct dialogue and scenarios, which in this case they have carefully designed to express the idea that some things can’t be expressed in words.

Of course Billy Bob narrates the shit out of this movie (something you don’t get in the neo-noirs) but other than that he only talks when necessary, and even then keeps it brief. And I don’t know if it’s that, or the lighting or what but Mr. Thornton’s face looks more interesting than usual here. You just stare at the lines in his face and think, there couldn’t’ve been a better individual for this role. And if some actor tried to do a better job than this, I would just tell him to go fuck himself. Asshole. Because who is he fooling, really, is my point.

This picture is not for everybody. If you don’t like really slow paced, really good movies, you won’t like it. If you don’t like to laugh and enjoy movies that are fun and able to drill themselves deep into your soul, you also will not like it. However if you like this movie, you will like it.

As for the hardcore Coen fans, I talked to a few of these freakos after the show. Of the ones I polled, all of them thought this was in the higher echelon of coen pictures. One of them thought it was their best. All of them thought it was better than o brother. Two of them first said they loved it so much and they would tell me why, but then they got distracted and just quoted lines from the big lebowski to each other for about ten to fifteen minutes. Apparently there is something about what happens when you fuck some stranger in the ass.

The only thing really sad about this movie is that it hasn’t been released yet, and I still had an easier time seeing it than I did seeing Bones. I mean what’s the deal with that, I saw the trailer and the poster for months, they got the snoop guy on tv promoting it, the ad comes on every two minutes but I had to take two long bus rides to see it.

I thought Seattle was pretty much a real city these days. We got police brutality, we got people killed in mardi gras riots. We’re the real deal. Off the top of my head I can think of about ten major theaters in the various neighborhoods and not one of them is carrying Bones. I had to go to fucking Renton out in the middle of nowhere. And okay, the movie isn’t quite the perfect modern day Blacula I was hoping for. But it’s not some little arthouse picture. These guys clearly spent alot of money advertising the thing, you’d think they’d want to have it on more than four screens per state. I’m sure we could clear out a Corky Romano or two, couldn’t we? The only thing I can figure is that the evil theater chain corporations are having some political fight with New Line Cinema over hobbit related issues which has gotten in the way of america being able to unleash the dogg.

Now I don’t know much about the rapping music but I do know this. Don’t poop on the snoop. That’s all I will say about this. You will not get another warning, people.

Anyway, my point is this. The Man Who Wasn’t There. Be there. your friend, Vern

Billy Bob Thornton Coen Brothers Frances McDormand James Gandolfini
This entry was posted on Friday, November 2nd, 2001 at 4:42 am and is filed under AICN, Crime, Drama, Reviews. You can follow any responses to this entry through the RSS 2.0 feed. You can skip to the end and leave a response. Pinging is currently not allowed.