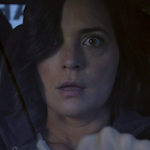 He put some of his sensibilities into the SyFy zombie series Z Nation, including an episode that’s mostly an extended chase scene and battle, and moreso in the more serious Netflix prequel series Black Summer. If you’ve checked out that show (and I recommend you do), you won’t be surprised that he can make a clean, elegant, deeply scary thriller like ALONE, which was released to digital platforms Friday after being well received at the virtual Fantasia Film Festival. It’s his simplest and least weird movie, all the better to show off his finely tuned suspense set pieces, enhanced by strong acting and a pervasively ominous atmosphere. And it’s very involving, making us feel like we’re there, whether “there” is in a parking lot at night watching truckers pull up to use a restroom, or high up in the trees listening to their brittle fibers creak as they bend in the breeze.

The story can be boiled down to this: Jessica (Jules Willcox, “Young Drunk Woman,” UNDER THE SILVER LAKE) is moving from Portland to somewhere north, on the road she gets targeted by a psychopath, and she fights to get away from him. All the details and moments that make it matter are solidly built inside that exoskeleton.

Before the trouble starts we know from her phone conversations that she’s been through some trauma. Her backstory is never over-explained – in fact I initially thought she was leaving an abusive husband, when in fact she has been recently widowed. Nevertheless, she has the correct instinct not to trust the strange man (Marc Menchaca, Ozark, The Outsider) who approaches her in a parking lot to apologize for almost causing an accident earlier. He reminds me of Jason Sudeikis crossed with Gary Cole, so he’s not the cliche image of a psycho stalker. He has a very authentic “well-meaning doofus too oblivious to understand that his gestures are making this woman uncomfortable” vibe, but of course we fear this is calculated. 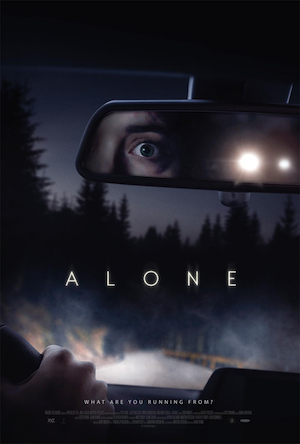 My advice is to stop reading this and come back after you’ve watched the movie. But if you’re sticking around, I have no choice but to reveal that it quickly shifts from JOY RIDE/DUEL/ROAD GAMES type road thriller to “oh shit, this guy is an experienced lunatic because he has me locked up in a dungeon in his remote cabin.” So she’s gonna have to fight or sneak or trick her way out and battle him and/or the elements to survive. And this is John Hyams so it’s gonna be an exhilarating ordeal that leaves both of them covered in sweat, mud, and blood.

It’s very effective on a primal cat-and-mouse level. More than once I realized my heart was pounding or that I was wincing in anticipation of the shit that was about to go down. Hyams gives us more than one torturous stretch of hiding ridiculously close to the kidnapper, watching him and agonizing between the unlikelihood of being able to wait him out and the risk of making a move. I say it like it’s happening to us, not Jessica, because it really puts you into her mind and the stomach churning feeling of having to make that choice of, “Yes, my best option is to reveal myself and try to run even though he’s holding a hunting knife.” I love that in one such scene her potential exit is not across the room, but right next to her, maybe three feet away. It makes the tension even more excruciating than if it was across the room with him in the way.

There are a few other characters, but most of the movie is just between these two actors, so it’s crucial that both are great, and it doesn’t hurt that I don’t recognize either of them from anything. Hyams previously directed Wilcox in an episode of Chicago P.D.; Menchaca was on an episode too, but well before Hyams was involved. That’s one area of the Hyams filmography I’m not familiar with. Does anyone here watch it?

In a story this streamlined, tiny bits can echo louder. For example, in their first awkward face-to-face encounter, when this character who’s only credited as “Man” is pretending to be a nice guy, he asks Jessica her name. She hesitates, clearly doesn’t want to tell him, but gives in. She doesn’t ask his name, not only because she isn’t actually interested in making his acquaintance, but because she’s afraid and wants to get away from him as soon as possible. At the time I wondered if it offended him that she offers standard “good to meet you” niceties without bothering to get his name. But it ends up being a point of power for him. He adds to his torment by calling her by her name, learning personal things about her through deduction and force, and using that information to poke at her. Like an internet stalker. In turn, she learns some things about him through eavesdropping, and it proves to be an effective weapon against him.

Same goes for the title. It’s basic, it’s not very specific – in fact there’s another movie about to be released with the same title, and that one’s about a zombie apocalypse – but it’s perfect. She’s dealing with being left alone by her husband’s death, but also she needs some time to be alone. She’s isolating herself from her family, and then she needs this fucking mustache guy (before she knows he’s a maniac) to leave her alone. There’s an extra vulnerability from the fact that she’s carrying all her belongings in the world in a small U-haul trailer, and they’re left behind in a ditch. Then she’s locked up alone, escaping alone, out in the woods alone, seemingly far away from civilization. But if she gets through this I bet she will still want some alone time.

Occasionally some part of me wonders if in fucked up times like these I would benefit from watching more happy escapism or enrichment and less of the ol’ violence and mayhem I tend to gravitate toward. But ALONE really taps into the moment, whether consciously or not. We identify with this woman who has been dealt too many blows already, who is trying to find herself and a way to start over, who now has to deal with this cruel stranger who feels empowered to inflict his sadism on her while privileged with the life of a nice guy, with a good job, a loving family. A guy who I’m willing to bet has at some point said that “as the father of a daughter” he of course is appalled by various misogynistic atrocities in the news, while harboring this sick hobby for who knows how long.

And in the classic Final Girl tradition, as extolled by Carol J. Clover in Men, Women, and Chainsaws, Jessica sets her mind to overcoming him, and whatever he represents to us, showing us there’s hope, even when we’re all alone.

The screenplay is credited to Mattias Olsson, who wrote and co-directed the 2011 Swedish film FORSVUNNEN (GONE) this is remade from (and which I have not been able find on DVD or streaming yet). Credit is also due to composer Nima Fakhrara (EXISTS, BECKY) for the sparse, foreboding score.

If you’re up for a straight forward, intense thriller – especially if you appreciate a CRAWL-like lack of beating around the bush – this is it. More John Hyams movies, please.

John Hyams Jules Wilcox Marc Menchaca Mattias Olsson Nima Fakhrara
This entry was posted on Tuesday, September 22nd, 2020 at 2:14 pm and is filed under Reviews, Thriller. You can follow any responses to this entry through the RSS 2.0 feed. You can skip to the end and leave a response. Pinging is currently not allowed.