Or is that even what it is? When MODERN VAMPIRES went straight to video in the U.S. it was October of ’99 and the cover had a design style and not-screen-accurate fashion flagrantly copying BLADE, but it had actually premiered before both BLADE and John Carpenter’s VAMPIRES. FROM DUSK TILL DAWN and Buffy the Vampire Slayer had already reclaimed bloodsuckers from Anne Rice, though, so I suppose that’s what they’re playing off of, if anything. Or maybe it’s just West Coast elite NEAR DARK.

Dallas (Casper Van Dien immediately after TARZAN AND THE LOST CITY, promised the role before STARSHIP TROOPERS) is a tough guy vampire who opens the movie driving into Hollywood in his black ’68 Camaro, rocking out to Reverend Horton Heat. We can tell by the fangs he chews his cigar with that he’s one of these new-fangled vamps the title refers to. And he’s returned after many years of unspecified activity to reunite with his L.A. friends, the German-accented art gallery owner Ulrike (Kim Cattrall a little before BABY GENIUSES) and her friend or something Richard (Craig Ferguson, VAMPIRE BATS). (Most of vampires are lusty with each other throughout, so it’s hard to know which if any are in long term relationships.)

They enjoy some victims together and go to a vampire dance club (again, this is pretty BLADE-like) where everybody is very casual about all the naked people chained and caged up to be served as drinks. A local vampire kingpin type guy called The Count (Robert Pastorelli, BEVERLY HILLS COP II, STRIKING DISTANCE) – later specified to be Count Dracula – picks out one guy to encase in a block with his head poking out so they can enjoy some “Italian” for dinner. (“No! I’m an attorney! You can’t do this!” he yells.)

The talk of the town is some vampire who risks blowing up everybody’s shit because she’s been leaving enough dead bodies to be labelled “The Hollywood Slasher.” (More civilized vampires can call for a service to do a “pick up” when they kill in public, we later see.) Her real name is Nico (Natasha Gregson Wagner, VAMPIRES: LOS MUERTOS) and she’s this trailer park girl who’s pretty new to L.A., living with her teddy bear inside a gask tank and posing as a Hollywood Boulevard prostitute to find her prey. (Her first onscreen victim is played by John Fleck, who was in HOWARD THE DUCK and also was one of the four performance artists involved in a Supreme Court case with the National Endowment of the Arts for vetoing their grants on the basis of subject matter)

She has kind of a junkie mystique about her. She talks to a pimp (Jason Ross-Azikiwe, DIE HARD 2, ARMY OF ONE) and pukes bloody chunks into his car. (“Now the humor in this film is very subtle, as you’ll see” Elfman says right before that on the DVD commentary.) She’s actually much older than she looks, but young compared to the other vampires (Ulrike can tell by the length of her fangs) so for all intents and purposes she’s a troubled teen who ran away from her mom (Conchata Ferrell, EDWARD SCISSORHANDS) and molester step dad (Brent Briscoe, U TURN, ZOMBEAVERS). Screenwriter Matthew Bright also did FREEWAY, of course.

The Count wants the Slasher killed, but Dallas finds her and takes her under his wing. Which is not literal, these guys don’t have bat wings, but it would be cool if they did. Actually he pretends to be picking her up, she bites his neck, he bites her neck back, they fall in love.

The other antagonist is Dr. Van Helsing, played by Academy Award winner Rod Steiger somewhere between MARS ATTACKS! and END OF DAYS. He uses a German accent too, and is revealed to be a Nazi? He also talks about God alot. I guess it’s like the Tonton Macoute thing in SHRUNKEN HEADS – tarring traditional hero roles with their casual connection to real life historical atrocities. Weird.

Van Helsing in town following a vampire infestation (basically the social circle we’ve been introduced to) in a VW bus. He posts an ad looking for help and hires Time Bomb (Gabriel Casseus, GET ON THE BUS, BLACK DOG), a friendly Crip who takes the job thinking he’ll be a normal hired gun but hesitates when his new boss tells him to pound a wooden stake through Vincent (Udo Kier, also in BLADE and ARMAGEDDON that year). When he does it takes an awful long time to work and then, rather than the dusting that became popular around that time, causes him to convulse and morph to pretty good desiccated makeup. (Rick Baker is credited only as a consultant, but Van Dien says on the commentary track that he not only worked on the makeup but often used his own money to pay for it.)

“That’s gotta be the worst shit I ever seen in my life, man!” Time Bomb says. And then the doctor makes him cut the guy’s head off.

Later, as the threat of vampires becomes clear to him, Time Bomb suggests getting “some of the brothas to help out,” to which Steiger perfectly delivers the line, “Brothas? What’s – what’s brothas, a new religious order?” 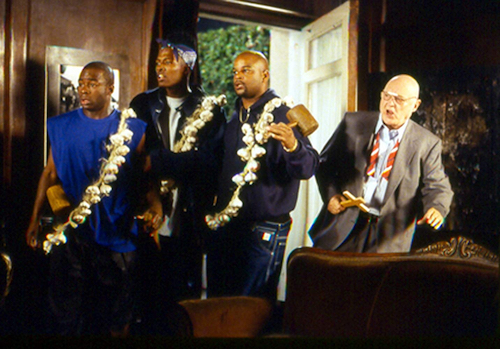 Pretty soon they have Time Bomb’s Crip associates Soda Pop (Victor Togunde, CAN’T HARDLY WAIT, LEPRECHAUN BACK 2 THA HOOD), Li’l Monster (Cedrick Terrell, SOLDIER BOYZ) and Trigger (Flex Alexander, JUICE, MONEY TRAIN, CITY OF INDUSTRY, SNAKES ON A PLANE, THE HILLS HAVE EYES II, Michael Jackson in MAN IN THE MIRROR: THE MICHAEL JACKSON STORY) in the back of the van drinking and toking, and later shooting guns at vampires. Once again every Black character – even the most likable one – is an ugly stereotype. On the commentary Elfman touts his “equal opportunity offensiveness” and that he grew up in a Black neighborhood (he says he went to the high school from BOYZ N THE HOOD), but I just want to note that these types of depictions happen to appear in every movie he’s made. I’m not saying I’m gonna throw away every movie that promotes stereotypes (you are free to yourself) but I think it’s important that we acknowledge them and try to progress to a world where people don’t believe this shit.

And it gets way worse. In what Elfman proudly calls “the most politically incorrect” scene of the movie, these four, uh… run a train on Ulrike while she’s chained to a bed. And while it is admittedly a funny grossout that she invites them to do this while in the form of a hideous monster, and they oblige, the scene actually starts out with these previously amiable characters planning to rape her. I get it, it’s deliberately offensive and all that, my discomfort is the intended response, but when it’s about rape and also promoting an idea of Black men being rapists it’s not in good fun in my opinion. If that makes me a prude, so be it.

I guess I can’t argue that there’s anything in the movie good enough to overcome that, but I will tell you some things I did like. Late in the movie Nico meets Rachel (BLADE TRINITY’s Natasha Lyonne right before she broke out in SLUMS OF BEVERLY HILLS and AMERICAN PIE) in a coffee shop bathroom, and it’s funny to see her skipping with excitement that her new friend called her on the phone while the others are shooting heroin into an abductee and then transfusing her blood into themselves. Lyonne (who soon starred in Bright’s FREEWAY II: CONFESSIONS OF A TRICK BABY) is charming in her small amount of screen time. At the end, Dallas walks off into the non-sunset with his arms around Nico and Rachel and the three make out with each other. Although I am not a fan of this cutesy word I have to say that this is a very before its time portrayal of a happy “throuple.” I’m sure it’s meant to be titillating and/or shocking, but it’s also a happy ending, so it has kind of a sweet non-judgmental feeling to it.

My favorite of the funny vampire lifestyle details is Dallas saying “How’s the little one?” to his pregnant friend who we then learn has been happily in that state for 150 years. She just forever has a little vampire buddy in her belly, I guess.

MTV VJ John Sencio has a bit part as an L.A. doofus who says, “I have this great screenplay that Steven Say-gall would be so good for.” On the commentary Elfman says, “God they did some improv, I hope I don’t get Steven Seagal mad. I kinda like his action films.” This was exactly when Seagal had gone DTV with THE PATRIOT, but doing one of those movies would’ve been a boon for the director of STREETS OF RAGE. It would’ve been funny to see how that would’ve gone.

The action here doesn’t seem legit enough to get him a job like that, but sometimes shit pops off and there’s a fire stunt, or a vampire gets hit with a ridiculous amount of bullets, since it doesn’t kill them. I like all the parts where Nico leaps through the air with a lynx growl. It’s also kinda funny just how savage she gets chewing on the clerk at a fancy boutique (Roberta Hanley, CAGE II, THE VIRGIN SUICIDES, and Elfman says on the commentary that she wrote AMERICAN PSYCHO, but if so she wasn’t credited).

As with SHRUNKEN HEADS, Elfman’s bigshot little brother Danny, who also did A SIMPLE PLAN, A CIVIL ACTION and PSYCHO that year, provided the main theme. But the score by Michael Wandmacher (SUPERCOP 2, NEVER BACK DOWN, PUNISHER: WAR ZONE) isn’t bad. Stuff like making a musical reference to BARRY LYNDON during a shootout might not be the most original idea, but it makes it a less generic straight-to-cable vampire movie than it could be.

And most of all God bless Steiger for doing this role and doing it exactly as he’d do any other role. He’s doing an accent and acting very serious and doing alot of yelling – he could be himself in MARS ATTACKS!, he could be Bela Lugosi in PLAN 9 FROM OUTER SPACE, it would work for either one. There’s a part that made me laugh where he was just speaking into a tape recorder describing the vampires going into a building, and I kinda think it was improv.

On the commentary Elfman says that Steiger was completely respectful and professional and would do thinks that weren’t expected of anybody like come to set at 2 a.m. to react to the actors’ lines off camera. He did that for a Casper Van Dien vampire movie!

Anyway, those are all the things I have to say about my final viewing of MODERN VAMPIRES. Much more than last time, at least.