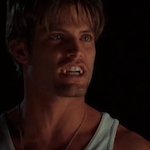 Or is that even what it is? When MODERN VAMPIRES went straight to video in the U.S. it was October of ’99 and the cover had a design style and not-screen-accurate fashion flagrantly copying BLADE, but it had actually premiered before both BLADE and John Carpenter’s VAMPIRES. FROM DUSK TILL DAWN and Buffy the Vampire Slayer had already reclaimed bloodsuckers from Anne Rice, though, so I suppose that’s what they’re playing off of, if anything. Or maybe it’s just West Coast elite NEAR DARK. END_OF_DOCUMENT_TOKEN_TO_BE_REPLACED