END OF DAYS is one I had previously skipped, in which Schwarzenegger has to save the world from The Devil. I guess I just figured somebody would’ve said something if this one was any fun at all. I don’t care if the Toxic Avenger already did it, I think anybody would enjoy seeing Arnold defeat the Prince of Darkness using his fists. Or even some guns. Or he could blow him up and have to jump away from the explosion, like in PREDATOR. The fact that nobody’s ever told me much about this movie is a good hint that it’s not something crazy, it’s just some more gloomy, mediocre, pre-millennial, digital era demonic bullshit like other less musclebound stars were doing. 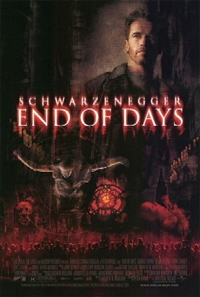 If it was made in ’88 or so it would’ve been another story. Our boy would’ve bodyslammed Lucifer and made some hilarious pun about devil horns or something like that. A real terrible one but not any of the obvious ones we’re thinking of, nothing to do with going to Hell. It wouldn’t try to be dark and spooky. Arnold would take the Devil on with the same cocky humor as he would’ve in PREDATOR, TOTAL RECALL, T2, COMMANDO, etc. But at this late date of 1999 filmatists were self-conscious about that type of movie getting made fun of. They’d second guess and play it safe and try to appeal to modern sensibilities by holding back the awesomeness, the result being mediocre and forgettable movies like this.

(On the other hand this was Schwarzenegger’s follow-up to BATMAN AND ROBIN and JINGLE ALL THE WAY, so in a way you gotta admit he was heading in the right direction. I guess Mr. Freeze filled the bad pun quote for the decade.)

There are some good parts. The movie starts with a priest seeing the signs (comet, etc.) that a baby is about to be born that the Devil is gonna use to kick off the Apocalypse. But the Pope or Bishop or whoever (sorry, wasn’t raised Catholic) says to let the baby be born, we must use God’s love and what not to win it over to our side. I thought that was kind of cool and Jesusy. The baby is born in a hospital and when the nurse takes the baby away from the mother to clean it up she actually brings it to Udo Kier to do a ritual involving the sacrifice of a rattlesnake. Then she brings the baby back like everything’s normal. See, I told you and I told you, this American health care system is fucked up. And that’s with health insurance. Without health insurance they just do the rattlesnake sacrifice right in front of you.

Anyway the baby grows up to be Robin Tunney from THE CRAFT, and she often has weird visions of Gabriel Byrne, but doesn’t realize he’s Satan or that he’s real and on earth looking for her. The Devil has his sinister plan, but there’s one man who can stop him…

An ex-cop named Jericho Cane trying to stop the Devil! I mean, it’s almost there. You can see that somebody involved wanted to go the ’88 route. That’s like a parody movie idea out of LAST ACTION HERO. If they embraced the absurdity more it could be a classic, but they try to appease the ’99 sensibilties for the most part.

(Okay, you may remember that ’99 was actually a great year for movies. But not because of END OF DAYS. It’s more in tune with the movies I just listed than with the best Schwarzenegger pictures.)

Anyway, he’s Jericho Cane. I guess nobody’s gonna buy Arnold as an occult expert or a priest, so the hero’s gotta be an ex-cop. He’s on the security detail for this banker asshole when there’s an assasination attempt, and then I wasn’t really clear why he kept following the trail that led to the girl and this Devil business. But he follows the clues carved into some dead priests and, along with his wisecracking partner Kevin Pollack (how that guy got into USUAL SUSPECTS and started getting these roles has always been a mystery to me), protects the girl from both a renegade faction of the church (who think they have to kill her to save the world) and the Devil (who thinks he has to fuck her to end the world).

There are a few good Devil bits:

-He walks up to a woman in a restaurant and makes out with her in front of her husband – at first the husband’s mad, but he takes one look and just decides he can’t do anything.

-He goes to Udo Kier’s house, asks “Is this your daughter?” and “Is this your wife?” and then it cuts to him in bed with both, Machete style.

-but since he’s the Devil and not Machete he does some satanic tantric type fuckin where their legs all kind of morph together, becoming one. Cool idea, but too obviously computery. Would’ve been pretty upsetting of Cronenberg and his VIDEODROME buddies did it with latex.

There’s also one particularly stupid part when he bumps into a skateboard punk and compliments him on his “Satan Rules” t-shirt. But come on, who the fuck wears a “Satan Rules” t-shirt? I’m positive that even Satan would realize what an awkwardly forced act of rebellion that is. But I guess maybe his evil plan is to spread lameness across the planet. He doesn’t like that shirt because it’s satanic, he likes it because it makes people cringe and avert their eyes.

Jericho Cane is supposed to be an alcoholic, so people smell it on his breath sometimes but it doesn’t affect him hugely. He seems pretty functional. Never gets a DUI or pisses himself or anything. He has to get help from Father Rod Steiger, but for fighting the Devil, not for dealing with his disease. This is the funniest part of the movie, the pure Arnold part:

But ultimately I think this is too much of a demonic thriller and not enough of an Arnold movie. You can’t just put him in a role written for Gary Oldman or somebody. So they should’ve pumped up the COMMANDO shit to take advantage of this rare genre crossbreeding. I mean, an ex-cop trying to beat The Devil with guns should be alot funnier than this. Also I’m not clear why the Devil is so ineffective against Arnold. He had no trouble exploding another character’s head with one punch. The bullet proof vest doesn’t help against that.

And when it comes down to it Arnold being possessed and trying to rape a girl isn’t that fun of an action climax. Hindsight is 20/20, but in my opinion T2: JUDGMENT DAY wouldn’t be quite as popular if at the end the Terminator went on the fritz and tried to rape Linda Hamilton. It was just more enjoyable to watch him battle the T-1000 as he falls apart and then lower himself into the molten metal to save the future from his own existence. I know rules are made to be broken but I gotta stand by the rule “don’t have the hero of your dumb action movie turn into a rapist at the end.” Even if he switches back.

Marcus Nispel almost directed this one. He got dumped due to artistical type differences, which nobody would’ve remembered if not for the manifesto he wrote earlier when he was directing commercials. That was some funny shit. But Hollywood is the land of second chances so it was only a few years before he found his true calling as the homeless looking guy who bums everybody out by making empty, joyless and poorly thought out remakes of their favorite movies. Peter Hyams, who we now know as cinematographer of UNIVERSAL SOLDIER: REGENERATION, took over shortly before filming, so I can’t entirely fault him for the movie’s flaws. It was probly a little late for him to rethink the whole concept and tone of the movie. He probly could’ve said something about the cheesy rock soundtrack with a bunch of random bands including Korn, Creed and Limp Bizkit, though.

The script is by Andrew W. Marlowe, who also did AIR FORCE ONE and later THE HOLLOW MAN for Schwarzenegger’s old TOTAL RECALL helmer. Hmm… maybe Verhoeven could’ve made this one work. I guess we’ll never know.

Oh, who am I kidding? We know. We just can’t prove it. Anyway, shoulda been better. 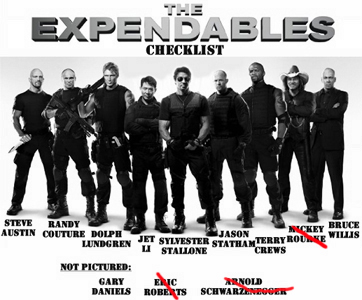 Arnold Schwarzenegger Countdown to The Expendables Gabriel Byrne Kevin Pollack Peter Hyams Rod Steiger the Devil Udo Kier
This entry was posted on Monday, August 2nd, 2010 at 1:24 am and is filed under Action, Horror, Reviews. You can follow any responses to this entry through the RSS 2.0 feed. You can skip to the end and leave a response. Pinging is currently not allowed.