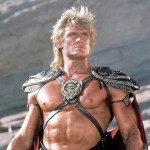 (I looked it up, and Armstrong actually hasn’t worked on the Daniel Craig ones, but he was stunt coordinator and/or 2nd unit director for DIE ANOTHER DAY, THE WORLD IS NOT ENOUGH, TOMORROW NEVER DIES and NEVER SAY NEVER AGAIN and stunt double for 3 other Bond movies.)

A couple days later I was reading an article by Moriarty about Rob Cohen and THE MUMMY 3: DRAGON TOMB EMPEROR ETC. In this article he goes into a whole thing about how Vic Armstrong was the stunt coordinator and stunt double for the first three Indiana Jones movies, but didn’t do KINGDOM OF THE CRYSTAL SKULL for mysterious reasons, and is getting revenge by doing ROB COHEN’S M3 instead.

I thought that was weird, I never heard of this Vic Armstrong before but he comes up twice in a couple days. Indiana Jones’s stunt double, huh? Pretty cool.

Next day I’m browsing the films of Dolph Lundgren at the local video store, as I often do, and I notice ARMY OF ONE is directed by one Vic Armstrong. Went home and looked him up – it’s the same guy, and this is the only movie he has directed.

Dolph Lundgren plays a driver who in the opening is transporting a truckload of unspecified illegal goods. He gets pulled over and his partner (original DAWN OF THE DEAD’s iconic Ken Foree) gets shot, then Dolph shoots the cop and it fades to black. Next we see the word “HOSPITAL” stenciled on a wall and a card says ‘9 months later.’ I thought “what does Dolph giving birth have to do with any of this?” but it turns out he’s just being transferred from the hospital to prison, a guard starts beating him up, and he has no choice but to escape and steal a truck along with the gorgeous model who owns it. So, you know how sometimes an army escapes from prison and takes a hostage and goes on the run from the cops? That is the type of army Dolph is only the catch is HE IS ONLY ONE MAN. An army of one.

So now Dolph is a fugitive, with a hostage, he’s a cop killer, and a team of cops led by George Segal in shades is organizing the manhunt. And I don’t usually pay attention to these types of things but I’m pretty sure Segal is the most Jewish redneck sheriff I’ve ever seen. Anyway it’s about ten minutes into the movie and suddenly I start thinking wait a minute… is Dolph supposed to be the bad guy? It started with him so I assumed he was the hero, but he is not exactly doing good things here. This lady is obviously innocent, and he keeps shoving her around. George Segal seems on the up and up. Maybe Dolph is the villain and the packaging is misleading? Shit, maybe George Segal is gonna get separated from the police force and he’s gonna be the one man army. Maybe Dolph is a one man opposing army to Segal’s one man army. It’s gonna be two man warfare.

Well, later we find out more information and it turns out to be more what you would expect, but I think that aspect of the script (by Steven Pressfield, historical fiction novelist and writer of ABOVE THE LAW) is pretty clever. Usually they don’t trust you to stick with it unless they tell you from the beginning “this guy was framed, he is actually a sweetheart, he takes care of old ladies and nurses animals to health, don’t worry that he’s a criminal because that’s all a misunderstanding.” This one takes its time doling out information. He never really denies being a cop killer, but we find out much later in flashback that the opening scene was misleading.

The hostage (played by Kristian Alfonso, who according to reports is from Falcon Crest and Days of Our Lives) looks like a cross between Denise Richards and Amanda Peet. If you had to guess her profession you would probaly say model or sexy nurse in a Van Halen video. But secretly she’s an asskicking martial artist sheriff’s deputy. She doesn’t play it as stupid as many female sidekicks like, say, Erika Eleniak in UNDER SIEGE, but she asks some dumb questions. For example there’s this scene where Dolph takes her to an old shack in the desert and forces an old man to give him gas at gunpoint. At first you assume it’s just some random dude but then he says, “I see you turned out how we all hoped you would,” and Dolph says, “I’m just following in your footsteps.” She sees that the old man has an article hanging in his shack that talks about Dolph winning a race. The old man refers to Dolph’s mother and Dolph gets mad and implies that the old man treated his mother badly.

So, you know, maybe it is because of my expertise and deep analytical study of action movies, but I sort of picked up on this idea that this guy is Dolph’s father. As they drive away Alfonso asks, “Who was that?”

Later she asks the same thing about a character played by Khandi Alexander who based on the conversation they have in front of her is clearly the mother of Dolph’s dead partner. I don’t know, maybe she’s not a moron, maybe she’s just fucking with him by asking him stupid questions. Either way he is surprisingly polite about it. He should get one of those “Snappy Answers to Stupid Questions” books in case she starts doing it again, he could be prepared.

Anyway, we learn the backstory a little bit at a time and SPOILER it turns out that Segal is a dirty cop who set up Dolph AND paid the prison guard to kill him, so Dolph is going after Segal’s wife and his stolen exotic car business to demand his and Ken Foree’s cut of the money from their job. Along the way the cop lady does a couple kicks and there are a couple shootouts. In one scene he shoots up a bunch of storefronts in order to scare cops without actually hurting them. Like Craig Baxley’s early work, Armstrong revels in some of the stunt work, and this is the scene where he pays tribute to the art of squibs and explosive charges. Dolph shoots a bunch of things including windows, produce and a pinata. Then he drives away and you see a watermelon truck which somehow goes unharmed.

In the best scene of the movie he gets to a warehouse full of Ferraris and Lamborghinis and demands his money, saying “it’s cheaper.” His rivals end up going with the other, more expensive option, which is that they don’t pay him and he smashes and shoots and explodes the living shit out of dozens of Italian sports car that they say are each worth more than his life. (I wasn’t so sure and I looked it up – sure enough they’re all Pontiacs with fake bodies on them, not real Ferrarris or Lamborghinis. So I’m not sure what that says about Dolph’s value as a human being.)

I think this scene is meant as a tribute to the warehouse shootout in HARD BOILED, and although it’s not nearly as epic it gets closer than most American movies. There are alot of god damn bullets fired in this scene. He sets a guy on fire and then kicks him, which as you know if you’ve read the Seagalogy chapter on THE FOREIGNER is something I enjoy. But Dolph even takes it one step further by kicking the guy into a stack of boxes which then explode.

(By the way there’s some gag involving Die Hard car batteries, and I know Al Leong of one-of-the-bad-guys-in-DIE-HARD fame is in that warehouse, but I didn’t catch if he was involved with the batteries or not. So that may or may not have been an in-joke. I am not in enough to be sure.)

(Shit, more trivia for you. In this movie Dolph watches HIGH SIERRA on TV and is inspired by it. In the last movie I saw, RICOCHET, Denzel Washington watched WHITE HEAT and was inspired by it [which actually directly affects how he deals with John Lithgow.] And that reminded me of the movie JUICE where Tupac if I remember right was obsessed with the same scene of the same movie. And then I realized that alot of dudes in movies are inspired by old movies. They always pick one and obsess over it. Kind of corny but better than I AM LEGEND where Will Smith is obsessed with SHREK.)

This particular criminal enterprise is a good choice for a movie because it means the big car chase at the end can logically be between a Ferrari and a Lamborghini. There’s lots of good high speed car footage as you would expect from a movie directed by a great stuntman and stunt coordinator.

Think about it. Anthony Bourdain is a famous chef, so when he becomes a crime novelist it’s no surprise that he has alot of cooking and restaurant business in his stories. Tim Burton was an animator, so when he started directing movies of course he worked in some little stop motion dinosaurs and large marges. And when a stuntman or stunt co-ordinator starts directing movies he’s gonna have pride, he’s not gonna have substandard stunt work. He’s not gonna let those action scenes just be mediocre. According to Wikipedia, the warehouse scene only had 5 deaths in the script, but you can see that Armstrong came up with some ad libs there. Giving him that scene is like handing Miles Davis a trumpet.

I would not say that ARMY OF ONE reaches the level of STONE COLD when it comes to stunt coordinators dolloping awesomeness onto a ridiculous action movie starring a big brute with blond hair. But it’s in a similar category of silly action with some clever ideas and some impressive, violent action scenes.

This has been an excerpt from my upcoming book SEGALOGY: A STUDY OF THE ASSKICKING FILMS OF GEORGE SEGAL.

Al Leong Dolph DTV Geoffrey Lewis George Segal Ken Foree Nick Chinlund Steven Pressfield Vic Armstrong
This entry was posted on Sunday, July 27th, 2008 at 10:39 pm and is filed under Action, Reviews. You can follow any responses to this entry through the RSS 2.0 feed. You can skip to the end and leave a response. Pinging is currently not allowed.