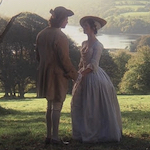 But he does at least act like a childish brat; he’s obsessed with his older cousin Nora (Gay Hamilton, THE DUELLISTS) because she got him to touch her boobs once, and he becomes possessive of her when she starts seeing this rich Army captain, John Quin (Leonard Rossiter, THE PINK PANTHER STRIKES AGAIN). His family keep having to run around kissing ass because Nora marrying this guy would get them out of debt but nitwit Barry keeps chasing him off by throwing a glass at his head during a toast and shit like that.

Barry’s ridiculous stubbornness is pretty amusing, and the insult to his ego is made funnier by Quin not being a particularly attractive dude. He’s a regular looking fiftyish man who could play the mean bank manager in a movie, but in this world he’s supposed to be hot shit because he’s rich and wears a fancy red uniform. And what Barry takes from that is that he needs to get himself one o’ them uniforms. 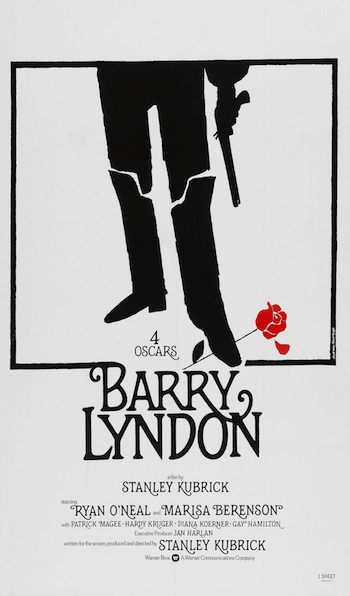 First he kind of becomes kind of like his era’s equivalent of a beatnik roadtripper or backpacker, excited to build a new life with the money in his pocket… which is immediately stolen from him (along with his horse) in a funny encounter with notorious (and quite witty) bandit Captain Feeney (Arthur O’Sullivan, RYAN’S DAUGHTER).

As you must know, since you must’ve seen it, he goes on to fight in a war (where he’s made fun of for complaining about the quality of the water), go AWOL from a war, impersonate an officer, get caught, get forced into the Prussian army, actually be pretty good at his job, be sent undercover to catch an Irish spy, but then feel a kinship to the spy and help him escape and travel with him as gambling buddies, then meet a wealthy Countess and seduce her in time to slide in there when her old husband dies and get himself a castle and the title of Barry Lyndon. That’s part I, then part II is about his lackluster approach to marriage (he leaves her at home with the kids while he goes off to orgies and shit) and his stepson Lord Bullingdon who hates his guts and his actual son Bryan who he actually cares about which makes it all the more shitty how much he doesn’t care about anyone else and eventually he and Lord Bullingdon have to duel.

There are a ton of fancy lad characters in this but one I want to mention is Reverend Samuel Runt (Murray Melvin, THE KRAYS), the loyal lifetime stooge, chaplain and personal flautist to the Countess (Marisa Bernson, WHITE HUNTER BLACK HEART, one episode of Murder, She Wrote). He clearly disapproves of Barry and works a bunch of shit about lust and fornication into the wedding ceremony (subtweeting, we call it now), and it’s just funny to watch his face getting mad about Barry, or not being able to hide his delight when things go bad for Barry, which is not very Christlike in my opinion.

Anyway I bring him up because they do an amazing job of making him look completely bizarre, a face you’d expect to see in a very old painting but not on a modern human. I think it’s a combination of his actual features, his uptight expressions and postures, and his dainty makeup and wigs. Together they make him perfectly alien. His entire time in the movie I couldn’t stop staring at him and thinking he looked like some Disney character. I guess he’s a little like the villain from POCAHONTAS squeezed into the size of the villain in HUNCHBACK OF NOTRE DAME. But maybe he dresses more like Ichabod Crane.

It’s also fun to hate Lord Bullingdon (Dominic Savage [director of various 2000s TV movies] as a kid, Leon Vitali [Kubrick’s long time assistant and Red Cloak in EYES WIDE SHUT] as an adult), who makes bigger scenes about his hated stepfather than Barry ever did about his cousin’s boyfriend. He refuses to call Barry his father, but also won’t call him by his title, only his original name of “Redmond Barry,” like how Kylo Ren calls his dad “Han Solo.”

It’s interesting to read that the original book, an 1844 joint by William Makepeace Thackeray of Vanity Fair (the book, not the magazine) fame, was first-person-narrated by unreliable braggart Barry. The movie amusingly uses an omniscient narrator, Michael Hordern (THEATRE OF BLOOD, LABYRINTH, Jacob Marley in the 1951 Alastair Sim version of SCROOGE and the 1971 animated version), who seems amused by the ruling class dipshittery he’s describing.

I’m glad I got to see it in the era of blu-ray. I kept being struck by how beautiful it looked, especially in the outdoor scenes. It’s usually just a light smattering of sun, the colors very subtle, and it’s got a little bit of that visible film grain I love in a transfer. I kept thinking how much it looked like a painting. In one shot I started thinking maybe the background was a painting, but then an in-scale bird seemed to fly across it. They definitely studied many paintings in the design of the movie, although I read that they decided against imitating the lighting schemes of certain paintings because it made it look flat.

I had of course heard about the groundbreaking cinematography by John Alcott, who worked in the camera department for 2001: A SPACE ODYSSEY and A CLOCKWORK ORANGE before becoming Kubrick’s main guy for a bit. Famously, they found a way (modifying super-fast developed-for-the-moon-landing 50mm lenses and camera shutters and developing the film differently) to shoot the interior scenes really using the light of the candles and nothing else. Which really does make it look different from so many generic costume dramas and makes you feel transported to another time.

Alcott won an Oscar for his efforts, then went on to shoot THE SHINING, as well as TERROR TRAIN, VICE SQUAD and THE BEASTMASTER. He has a cameo as the guy asleep on the chair when Lord Bullingdon challenges Barry to the fateful duel. My choice for a spin-off/prequel character.

The movie is three hours long and pretty well documented, so rather than go through everything in detail I want to focus on my favorite part: the climactic duel between Barry and his stepson. These musket duels happen throughout the movie so it had already struck me how ridiculous they are – supposedly civilized men solving their pig-headed disputes with a death match. It’s not even a matter of skill, it’s just basic gun competence combined with luck. Not to mention it’s generally over in one shot, and there’s not gonna be a Sam Raimi QUICK AND THE DEAD montage, so how cinematic can it ever be? 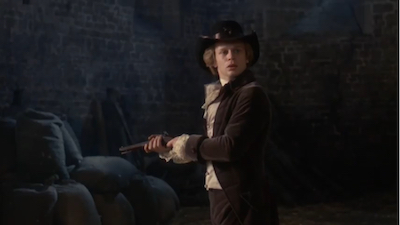 Well, leave it to Kubrick to figure out a way to make an incredibly drawn out, suspenseful sequence out of one duel. Lord Bullingdon, who has been basically waiting his whole life to instigate this showdown, finally gets his chance to kill Redmond Barry, but misfires and blows his load into the ground. His comical oh shit expression and frozen pose is one of my favorite flavors of Kubrick – the parts I think are dryly, darkly humorous that I’m not sure other people see as funny at all.

The judges explain to him that that counts as his shot, that’s the rule. Barry confirms that that is the rule and that he will insist on following it and taking his turn next. Lord Bullingdon looks like he’s gonna shit his pants, but instead he runs over to a wall and pukes a couple times. When he’s ready he comes back to his spot, stands sideways and waits to get a hot explosive ball shot into his flesh to likely cause a slow, painful death courtesy of the man he most hates in the world who he could’ve just learned to live with but instead chose to force into this deadly confrontation.

And it’s so painfully bucket-of-blood-pouring-on-CARRIE slow to get to the point when it becomes clear that Barry will in fact just point his gun down and intentionally fire it into the ground. You know, he freaks him out a little, but he’s not gonna shoot him. Lord Bullingdon looks up and sees that Barry missed him on purpose. That he did the honorable thing. The merciful thing. Uncharacteristic of Barry, honestly. Maybe we, and Lord Bullingdon, should reconsider him.

The judges seem very relieved. Lesson learned, face saved, problem solved, peace made, disaster averted, time to pack up and go home and leave this whole mess beh— what? Oh, Lord Bullingdon doesn’t want to call it a draw? He wants to move on to the next round? Gulp. Okay.

It’s just such a perfectly caustic encapsulation of mankind, this casual barbarism of obstinate men killing each other instead of learning to make concessions. They dress it up in fancy clothes, rituals and rules, judges very calmly and politely preparing the guns, explaining the rules, announcing the rounds. And even they are taken aback that this little dweeb is still gonna go through with it when he got his out, but they’ve already signed onto this, this is the system, they’ll go through with it too.

I love the sardonically dismissive epilogue text. It sums up pretty well what I got out of it: here are these people covered in layers of makeup, frills, pleats, ribbons and embroideries, sitting in ornate furniture dwarfed by gigantic rooms filled with paintings as big as billboards, the top half of the frame empty to fit the towering ceiling in the shot; they are impossibly rich and self important, but they’re still a bunch of doofuses like anybody else, getting all in a tizzy about stupid bullshit, treating their wives bad, failing to balance their checkbooks. Barry got everything he wanted and he’s still a dumb fuckup, undone by his need to marry into a rich family, and subsequent mistreatment of the countess and her son, just like his dad was undone by some unspecified disagreement over a horse transaction. I bet if he would’ve occupied himself with more worthy passions he could’ve lived longer in smaller rooms and more comfortable clothes. 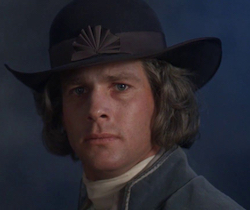 Maybe it’s just me, but I kept thinking O’Neal looked like Thomas Jane in this movie. So that’s who I think they should cast if they ever decide to do the sequel, LYNDON HAS FALLEN.

Arthur O'Sullivan Gay Hamilton John Alcott Ken Adam Leon Vitali Leonard Rossiter Marisa Bernson Michael Hordern Murray Melvin Ryan O'Neal Stanley Kubrick
This entry was posted on Wednesday, May 6th, 2020 at 10:39 am and is filed under Drama, Reviews. You can follow any responses to this entry through the RSS 2.0 feed. You can skip to the end and leave a response. Pinging is currently not allowed.