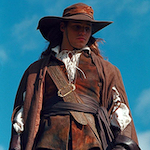 The movie that this wisecracky but serious-toned loose rewrite of Dumas most reminds me of is THE MASK OF ZORRO, though admittedly it doesn’t have the same level of production value (the shitty transfer on the DVD surely doesn’t help with that) and the leads come nowhere near Banderas/Zeta-Jones level charisma. But the reason it’s been on my radar for 20 years and I finally watched it was because the action director (who even gets his name on the opening credits) is Xin-Xin Xiong. He’s perhaps best known as an actor and Jet Li stunt double in the ONCE UPON A TIME IN CHINA movies, but I always think of him as “The guy with the switchblade between his toes in DOUBLE TEAM”:

Who the fuck wants to see a knew Three Muskete–

Wait, what’s that you said? The DOUBLE TEAM switchblade foot guy is doing it? Well that’s another story. Where do I sign?

He wasn’t just in DOUBLE TEAM, he was also the choreographer, and he also did SIMON SEZ and WONDER SEVEN. In THE MUSKETEER he doubles the villain, Febre (Tim Roth in the same year he was in PLANET OF THE APES), while Qiao Tan (TAI CHI II) doubles the hero, d’Artagnan (Justin Chambers, LAKEVIEW TERRACE). Those wigs and floppy hats hide their faces well, but the way they jump around there’s no question they come out of Hong Kong cinema. 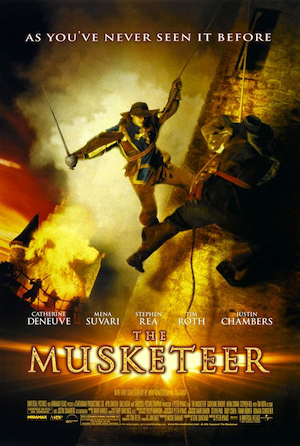 I appreciate that THE MUSKETEER moves quicker than many of the period movies that are trying to be all historical and shit. It takes 3 and a half minutes to get to the point where young d’Artagnan has stabbed Febre’s eye out, his parents have been murdered in front of him and Planchet (Jean-Pierre Cataldi, FRENCH CONNECTION II) has taken over his guardianship and musketeer training. As an adult, d’Artagnan journeys to Paris to try to join the king’s elite guard or whatever like his father before him. But to his disappointment he finds that the musketeers have been sidelined by the power mad Cardinal Richelieu (Stephen Rea, UNTIL DEATH), so they’re all a bunch of old guys who hang out in a bar and don’t seem that impressive.

They’re not impressed by him either, so he changes that by staging his own mission with Porthos (Steve Speirs, Gungan Captain Tarpals in THE PHANTOM MENACE) and Aramis (Nick Moran, AVENGEMENT) to rescue Treville (Michael Byrne, INDIANA JONES AND THE LAST CRUSADE).

Meanwhile he stays at a boarding house and crushes on a chambermaid named Francesca (Mena Suvari in her followup to AMERICAN PIE 2) who despite her low station is almost regally confident because her late mother was a seamstress to the Queen (Catherine Deneuve, DANCER IN THE DARK), and they’re still friends. The backstory is important because Francesca later recruits d’Artagnan to escort the Queen on a secret diplomatic mission while the psychotic Febre tries to kill her.

I feel mean writing this, but Chambers and Suvari are both pretty awkward doing their witty comments and flirtations. Maybe the accents are tripping them up. Sometimes it works, and d’Artagnan gets some pretty good funny lines and quirks. I like that he’s always talking encouragingly to his horses, and gets in a confrontation with some guys when they won’t apologize for allegedly hurting his horse’s feelings.

I had a hard time telling the old guy characters apart, but they’re pretty good. There’s alot of pretending to be worthless just to test d’Artagnan – Planchet allowing himself to be taken hostage even though he has spinning pistols that can pop out of his sleeves, the musketeers refusing to help him on a dangerous mission only to find out if he’ll try to do it by himself (he does, and then they join him).

The script is by Gene Quintano, who started during the 3D boom (COMIN’ AT YA!, TREASURE OF THE FOUR CROWNS) but then did POLICE ACADEMY 3–5 and directed HONEYMOON ACADEMY, LOADED WEAPON 1 and FUNKY MONKEY. Anyway, somehow that same guy also wrote SUDDEN DEATH and this, and I honestly think there’s some good stuff in here.

I’ll give an example: At the boardinghouse, d’Artagnan notices some straw falling from between the ceiling boards, and he realizes that a pervert (Bill Treacher, TALE OF THE MUMMY) is spying on Francesca in the bath, so he goes up there to confront him. Of course d’Artagnan himself collapses through the ceiling into the bathroom as if he’s the peeper, and is embarrassed. Ha ha. But because Francesca is acquainted with the actual pervert and calls him a “sewer rat,” d’Artagnan forces that guy to show him the way through the sewers and use it for a hostage rescue. At the same time, this scene sets up for him to later escape through the ceiling, and establishes a visual signal that comes up later, when a piece of straw falls from the ceiling and we know it means that an important conversation has been eavesdropped on. So it’s some well thought out storytelling.

On the other hand the scene also sets up that d’Artagnan is afraid of insects, and it weirdly never comes back. And come to think of it there’s a part where they talk about legends of a giant crocodile living in the sewer, and you just know that means we’re gonna get a giant crocodile scene… except we don’t. I would’ve gone for that, obviously. Was a bunch of stuff cut out of this? That would explain a few abrupt fades to black. I’m not sure if it would explain the ugly Photoshop filter looking credit graphics. I don’t know what’s up with those.

I had an easy time forgiving these shortcomings since the action lived up to my hopes. Right at the beginning d’Artagnan gets into a fight with some jerk in a saloon (all movie heroes should do that, honestly) and he’s jumping onto tables and doing flips and you can’t help but say “Yep. Hong Kong.” He knocks a guy into a shelf that breaks and causes a bunch of wine barrels to fall off and roll across the floor, so he jumps on top of them to save a little girl from being crushed, then walks on the rolling barrels, does the splits, a flip, leaps into the rafters, all kinds of good shit.

There’s definitely some wire work (which I have never been against) but also just your big stunts: climbing on things, fighting on things, falling off of things. He climbs from window to window on the side of a structure, swinging on large shutters and trailing a rope which he then jerks after attackers pop out of the other windows, knocking them off the building. There’s a really good battle on top of and around a speeding horse-drawn carriage, jumping from horse-to-horse, swinging from branches, shooting a horse so that it falls down and trips another horse, hanging on the undercarriage (of course).

The scene that was cool enough to base the marketing campaign around is when he fires a grappling hook up a castle and fences with several people while all are dangling from ropes and kicking off of the side of the tower. But that’s not the climax. d’Artagnan later duels Febre in an undeniable homage to ONCE UPON A TIME IN CHINA, running across tall ladders that tip and swing around and yes, balance like a teeter totter with one standing on each end. It’s not as long as the version of this sort of thingin OUATIC, but it’s pretty spectacular and unusually gravity averse for a western film. I love it.

In my opinion the big orchestral adventure score by David Arnold (INDEPENDENCE DAY, WING COMMANDER) is too big and busy during some of the action scenes, but otherwise I can dig that kind of old fashion SUPERMAN-ish rousing of the spirits.

I want to mention that Chambers’ voice and accent and the way he jokes and flirts kept reminding me of Hayden Christiansen in ATTACK OF THE CLONES, so it’s weird how much this picnic scene resembles the one in that movie! They talk about their backgrounds and world views, but he doesn’t get tromped by a weird space animal, so instead they have sex. In retrospect we can see how much Anakin blew it by trying to climb onto that animal to show off.

You could also argue that there’s a similarity between missions: Anakin secretly transports and hides a Queen-turned-senator in disguise, falling in love with her along the way; d’Artagnan transports a Queen in disguise who needs to deliver a message, and he’s falling in love with her young companion Francesca. Also, there’s a similarity between the Musketeers and the Jedi as a legendary and revered type of highly trained swordsman/freerunner, and this young hotshot-in-the-making still trying to prove himself, who gets into deep shit but is joined by a huge group of the older Musketeers for a big battle at the end.

You know what, this might be a stretch, but George Lucas could’ve known about this movie. According to Mike Leeder, Sammo Hung was briefly in talks to be action director of ATTACK OF THE CLONES, so the idea of Hong Kong choreographers doing western sword fight movies was definitely on Lucas’s mind around that time. So I am tentatively adding THE MUSKETEER under BLIND FURY and STEEL DAWN on the list of cool lowbrowish movies that might’ve been unlikely STAR WARS prequel inspirations.

THE MUSKETEER is directed by Peter Hyams (who is also the d.p.) in his followup to END OF DAYS, and produced by long-time Jean-Claude Van Damme producer Moshe Diamant, who had already worked with Hyams on TIMECOP and SUDDEN DEATH. Oh, man – it would be cool if Van Damme was in this, in absolutely any role. The lead, his dad, the villain, any musketeer, the king, the cardinal, anybody. Oh well.

I figured having some guy from THE WEDDING PLANNER as the lead was the reason this didn’t really catch on at the time or since. But a bigger problem might’ve been that it was released on September 7, 2001. It was actually the #1 movie during the week of 9-11.

But I think it’s a fun movie. If you are interested in that swashbuckly/wire-fu-y combo, check it out. That’s what I did, and I was satisfied with the results.

Bill Treacher Catherine Deneuve David Arnold Jean-Pierre Cataldi Justin Chambers Michael Byrne Moshe Diamant Nick Moran old timey adventure Peter Hyams Qiao Tan Stephen Rea Steve Speirs The Three Musketeers Xiong Xin Xin
This entry was posted on Monday, January 18th, 2021 at 11:30 am and is filed under Action, Reviews. You can follow any responses to this entry through the RSS 2.0 feed. You can skip to the end and leave a response. Pinging is currently not allowed.

46 Responses to “The Musketeer”