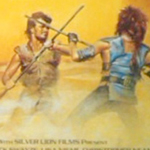 He’s a nomad. In fact, he’s credited as Nomad. Heading for a tavern, he gets attacked by an old warrior who turns out to be Cord (John Fujioka, AMERICAN NINJA, AMERICAN SAMURAI, AMERICAN YAKUZA), an old war comrade just fucking with him. They catch up over drinks but suddenly a bunch of brutes led by a guy named Sho (Christopher Neame, LUST FOR A VAMPIRE, DRACULA A.D. 1972, SPECIES III) in a ridiculous hair metal wig attack them and kill Cord. 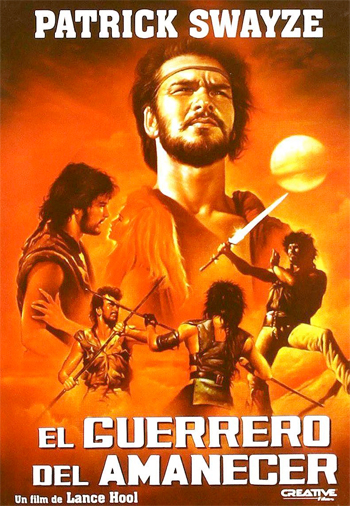 On his travels Nomad stops to ask for water at a farm in a settlement called Meridian. The owner, Kash (Lisa Niemi, SLAM DANCE) and her bodyguard Tark (Brion James, RADIOLAND MURDERS) let him stay, even though when they ask what to call him he says “whatever you want,” which in my opinion is rude because it creates awkward social situations.

At night he goes with them to a meeting of the land owners, where some fucking asshole named Damnil (Anthony Zerbe, OMEGA MAN, ROOSTER COGBURN) comes and threatens everybody and knocks over some stuff. The town is waiting for a “Peacekeeper” who has been assigned to keep watch over the town, but Nomad knows that was Cord, which means that Damnil must’ve been behind his assassination. He doesn’t tell anybody this, as is the mysterious drifter way.

Kash has a son named Jux (Brett Hool, I’m assuming the son of director Lance Hool) who seems weirdly close to Anakin Skywalker in THE PHANTOM MENACE. He wears similar clothes and has a somewhat similar haircut and is building “a wind racer” kinda like a pod racer. He has a friendship with Nomad much like Anakin’s with Qui Gonn, learning about the ways of his elite warrior class while his sad mom looks on from a distance.

I’m not sure what to make of these parallels. It’s hard to imagine George Lucas watching STEEL DAWN and being influenced by it, but on the other hand there’s that death in BLIND FURY that seems way too similar to Darth Maul’s death to be a coincidence. Maybe Lucas is more into cool ’80s b-movies than we would assume. And both of them take influence from samurai movies, which he’s obviously into.

At any rate, Anakin is (believe it or not) an enormous improvement over Jux. I feel bad saying this, but Hool’s performance shows that a lack of energy or emotion can be worse than little Ani’s “YIPPEE!” boyish enthusiasm. 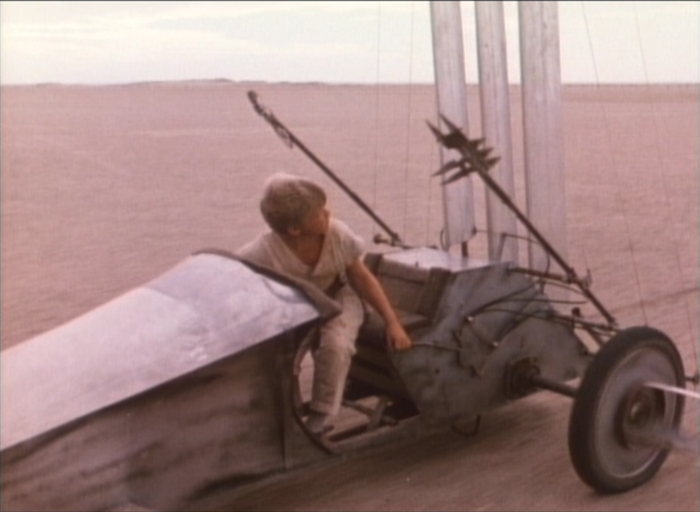 Kash’s farm is in Damnil’s targets because she has pure water that she can pump out from beneath it. When somebody sabotages the pump, Nomad takes Tark on a night time mission to Damnil’s to steal a new valve.

The next day, Tark goes to a saloon and gets drunk, jealous that Nomad is getting all the credit for their successful valve heist. When Nomad comes to get him Tark drunkenly unleashes on him and tries to fight him. “I’m not taking orders from you anymore!” As he tries to fight him Nomad effortlessly dodges each swing, causing him to crash into different things and embarrass himself. But the difference from any other actor is that Swayze looks upon him with such pity, such sympathy, and it’s completely believable. Watching this scene really solidified my love for this persona that we know from POINT BREAK and ROAD HOUSE, a man who is so tough but so sensitive, a perfect yin yang of action star and romantic lead, the type of balanced masculine ideal the world really needs to look to these days.

And there’s a little bit of that “I need time to change” Seagal magic in this scene.

“Nobody wants a worn out old soldier anyway,” Tark whines.

This is the unique sensitivity of a Patrick Swayze character. I’ve been a fan of him for a long time, but watching this again took it to a higher level. Nobody else so consistently played characters with such a pure, sincere balance of extreme masculinity and femininity. We first meet him meditating. When he sees a dog watching him, he smiles. The dog follows him around for the whole movie, because why wouldn’t a dog want to keep an eye on Patrick Swayze, make sure he’s okay? Eventually the dog gets in on the action. A guy comes after Nomad spinning nunchakas, but the dog chases him away, then comes back with the nunchakas. 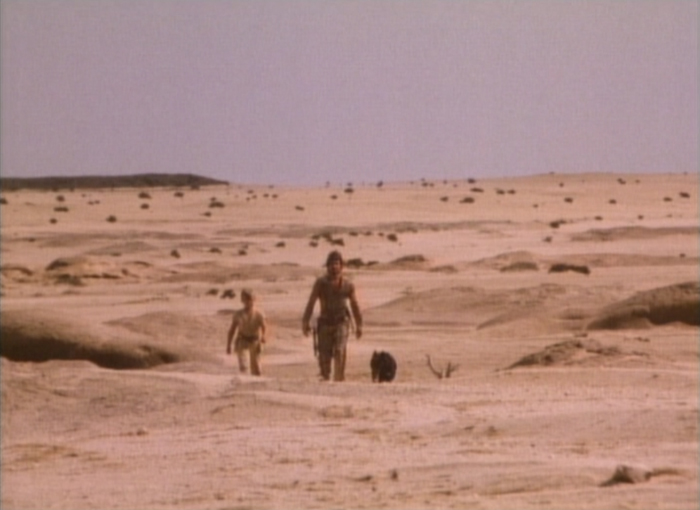 Nomad has no fear. Even when he’s in a little tub taking a bath and warriors on horses surround him and threaten him he doesn’t flinch. In fact he steals Arnold Vosloo’s spear from him, tells him not to “play with sharp objects,” and tosses it back to him. Complete confidence in the safety of his junk.

When Nomad eventually duels Sho, they acknowledge each other’s past roles, and Nomad implies that Sho has no honor. But it’s really later rematch that’s the kind of shit I live for. Even though this guy is a dick and sounds like a snot and wears a terrible wig and is a murderer, he impresses us by following a samurai type code. He says “Luck” before the duel and returns Nomad’s bow. Winning the fight fairly is so important to him that when it’s getting iffy and another soldier tries to sneak up on Nomad, Sho gets pissed and beheads the guy.

“I warned you not to interfere!” he says. Then, to Nomad, “You’re the best competition I’ve ever had. But no one is better than me.”

“You talk too much,” says Nomad.

Once Sho is (SPOILER) impaled and dying he asks for his sword back. You figure he’s bluffing, he’s trying to get a weapon so he can make a punk move. But, refreshingly, this is not a trick. I think maybe he means to commit harakiri, but he’s too late. At least he gets to die with his swords in his hands.

Like Mad Max, and like his credited name implies, Nomad cannot stay and settle down when it’s all over. He has to leave to have implied further adventures, even though Kash wishes he wouldn’t. But because he’s Swayze he exposes his emotions, passionately telling her, “You are the strongest person I’ve ever known.” Not strongest woman, either. Strongest person.

And he has deeper inspiration for the boy. Jux chases after him as he leaves. “Wait! Wait! I’m coming with you!” the kid cries. “You have to teach me to be a soldier!”

“You don’t want to be a soldier,” says Nomad.

Somebody should’ve told Anakin that, I guess. Would’ve saved everybody alot of trouble.

Lance Hool is a Mexican producer and actor who wrote MISSING IN ACTION and directed MISSING IN ACTION 2: THE BEGINNING. Other than that his only directorial work was the very personal ONE MAN’S HERO (1999) starring Tom Berenger. He continued producing into the 2000s, most notably with MAN ON FIRE.

Anthony Zerbe Brion James Christopher Neame John Fujioka Lance Hool Lisa Niemi Patrick Swayze post-apocalypse
This entry was posted on Wednesday, May 24th, 2017 at 9:19 am and is filed under Action, Reviews, Science Fiction and Space Shit. You can follow any responses to this entry through the RSS 2.0 feed. You can skip to the end and leave a response. Pinging is currently not allowed.